Declines in Atlantic Yellow-nosed, Tristan and Wandering Albatrosses thought due to pelagic longlining in the south-western Atlantic

Sebastián Jiménez (Proyecto Albatros y Petreles - Uruguay) and colleagues, writing in the journal Aquatic Living Resources have assessed the risk to ACAP-listed albatrosses and petrels from the Uruguayan pelagic longline fleet.  They conclude that the combined longline fleet in the south-western Atlantic is likely to be causing declines in populations of Tristan D. dabbenena, Wandering Diomedea exulans and Atlantic Yellow-nosed Thalassarche chlororhynchos Albatrosses.

"Bycatch in longline fisheries is considered one of the main threats for the conservation of albatrosses and petrels worldwide.  However, the relative impact of fisheries on all the affected populations or species still remains poorly understood.  This paper applied a Productivity and Susceptibility Analysis (PSA) and the concept of "Potential Biological Removal Level" (PBR) to assess the relative impact caused by the Uruguayan pelagic longline fishery on several populations.  This two-step approach allowed us to obtain an objective view of the relative impact of the Uruguayan pelagic longline fleet on most of the populations or species of albatrosses and petrels with high association with this fishery.  Of fifteen species considered, fourteen were finally assessed and a ranking of risk derived.  The concept of PBR was applied to the nine most at-risk species.  The impact of fishing on populations could not be straightforwardly inferred from their bycatch rates.  Results indicate that large albatrosses (Diomedea spp.) and Thalassarche chlororhynchos are more affected than some of the main species caught by the fishery (i.e. Thalassarche melanophrys and Procellaria aequinoctialis).  Diomedea exulans from South Georgia is likely to be the population most affected by the Uruguayan fleet.  This work should be seen as a case study of the fisheries operating in the southwestern Atlantic.  The Uruguayan fleet within its operation area was responsible for only the 4.3% to 12.5% of the total annual effort deployed by the different fleets during 2004-2008.  The combined impact of these fleets could be sufficiently high to account for many of the observed declines in the populations of D. exulans, D. dabbenena and T. chlororhynchos.  However, the seabird bycatch numbers for most of the pelagic longline fleets that operate in the southwest Atlantic remain unknown.  Applying mitigation measures to reduce the impact of pelagic longline fleets operating in this region should be considered a high priority." 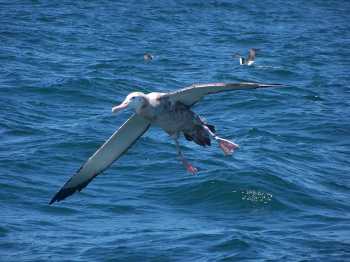 At risk: a colour-banded Tristan Albatross from Gough Island approaches a fishing vessel off Uruguay
Photograph by Martin Abreu

With thanks to Sebastián Jiménez for information.