"On June 11, the bird was seen wandering from its nest area to the shoreline as the instinct to fly and paddle out to sea became stronger. It continued to walk and flap near the shoreline, as well as paddle in the near-shore waters to strengthen its wings and legs. The chick's first swim in the ocean lasted 15 minutes. It walked into the lapping waters, paddled out 50 meters, submerged its head for a quick look, sipped some sea water, and then practiced flapping before paddling back to the shore. The chick was last seen the evening of June 15. By June 17 it was gone."

"Once one of the world's rarest birds, the endangered Short-tailed Albatross continues to recover," said Refuge Manager Sue Schulmeister. "Sightings of the species have been relatively rare over the years, even on Midway Atoll National Wildlife Refuge.  In the years to come, following this event, perhaps that will start to change."

To watch a short video clip of the bird walking along the shoreline go to http://www.youtube.com/watch?v=Q_q6avfdDAI.

"Wildlife biologists at Midway Atoll National Wildlife Refuge, part of the Papahānaumokuākea Marine National Monument, have banded the first Short-tailed Albatross chick hatched outside of Japan. The five-month old chick received a permanent metal band on its right leg and a red-and-white one coded "AA00" on its left on 8 June. When the bird fledges, the bands will help biologists track this extremely rare and endangered seabird to learn where it will one day go to nest. Most albatross return to the island where they were hatched."

"We are very excited that the chick, raised by first-time parents, has made it to where we believe it will fledge, perhaps by mid-June," said Deputy Refuge Manager John Klavitter.

Go to http://www.flickr.com/photos/usfwspacific/sets/72157625522391142/ to read the whole press release by the US Fish & Wildlife Service and to view more photos of Midway's STALs.

Latest report is that the Short-tailed Albatross chick on Midway continues to do well (it can now stand) and is expected to fledge within three weeks or so.

"We  plan to colour band it around 8 June or so.  Band will be red with the following letters and numbers in white:  AA00." 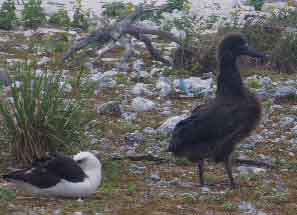 "I got over to Eastern Island and checked on the Short-tailed Albatross chick this week.﻿  It still looks like it's doing alright.  It will have to be banded soon.  We don't want to lose track of that one."  [15 May 2011]

From:  http://peteatmidway.blogspot.com/  where a new photo of the chick next to an adult STAL model by Pete Leary (Midway's Wildlife Biologist) can be viewed.

This confirms its continued well-being after the 10 March tsunami that washed it metres away from its nest (click here to access earlier ACAP news items on the USA's first-ever Short-tail chick).

The photograph shows the chick is gaining its juvenile plumage and losing its down, so things look good for its successful fledging in due course.

For more photographs of the feathering chick visit http://peteatmidway.blogspot.com/.

Apologies for the lack of  photographs: difficult to add while in the sub-Antarctic!