The U.S. Fish and Wildlife Service announced on 21 March that "Wisdom" the 60-year-old Laysan Albatross Phoebastria immutabilis, has returned to feed its chick on Midway Atoll National Wildlife Refuge, thus surviving the tsunami that has killed so many albatrosses on the Northwestern Hawaiian Islands (click here). 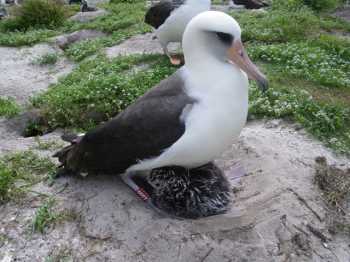 In the face of tremendous losses of Laysan and Black-footed P. nigripes Albatrosses at the Refuge - including an estimated 110 000 chicks and 2000 adults - to the tsunami that over-washed portions of the Refuge, biologists are thrilled to discover that Wisdom survived, said Barry Stieglitz, Project Leader for the Hawaiian and Pacific Islands National Wildlife Refuge Complex.

"Although wildlife biologists generally manage at the level of populations," Stieglitz said, "we, too, become entwined in the fates of individual animals.  Wisdom is one such special creature.  She has also provided us valuable information about the longevity of these beautiful birds - in her case over 60 years - and reinforces the importance of breeding adults in the population. It's also very humbling to know this bird has been producing chicks longer than I have been alive."

The Refuge's other "celebrity" albatross' fate remains uncertain.  The parents of the Short-tailed Albatross P. albatrus chick hatched on Midway's Eastern Island in January have yet to be seen.  The chick - the first of its species hatched at Midway - was washed approximately 100 feet from its nest by the tsunami, but was later safely returned by Refuge biologists.  Since the chick is incapable of fending for itself, the Service will carefully consider whether hand-rearing this bird is appropriate if it is determined that it is not being fed by its parents.  It is believed these parents are at sea, gathering food for their chick like Wisdom was, and will be seen again. 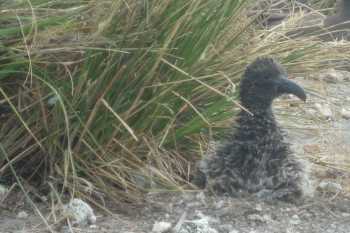 The above news has been taken, slightly adapted, from http://www.flickr.com/photos/usfwspacific/5546703373/ with thanks.  Visit this site to see a picture of Wisdom with her chick after the tsunami.