With parlous news this month about North Pacific albatrosses dying in their tens of thousands from the effects of the tsunami and for South Atlantic seabirds from a ship running aground and spilling oil around Nightingale Island, it is pleasing to report instead of a continuing success story that may well be destined to result in the establishment of a new breeding colony of Short-tailed Albatrosses Phoebastria albatrus on Japan's Mukojima Island.

Followers of this web site's news will know that each year since 2008 STAL chicks have been taken from Torishima and hand-reared until fledging on Mukojima Island in the Ogasawara (Bonin) Islands.

This year for the first time colour-banded birds from the first cohort of 10 chicks have started returning to the artificial colony as four-year-olds, interacting with the latest batch of chicks and also engaging in courtship displays with one another (including between females).

In the last few days two more"2008-ers" have arrived on the island and been seen displaying and interacting ashore, bringing the numbers of their cohort that have returned to date to four, a rate of 40%.  Let's hope more will arrive in time. 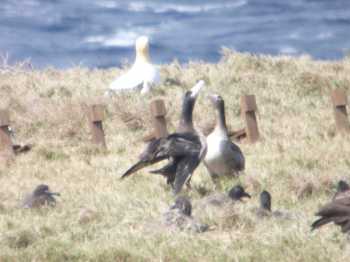