Charles Baudelaire and L'Albatros: a compassionate French poem in the service of conservation

The Albatross and Petrel Agreement has three official languages: English, French and Spanish.  Increasing awareness of the Agreement among the general public requires communicating in all three of these languages.  An occasional series of stories being published in ACAP Latest News covers the usage of albatrosses and petrels in art and literature in the ACAP languages in an endeavour to reach a wider audience.

Pierre Charles Baudelaire (9 April 1821 - 31 August 1867) was a French poet whose most famous work Les Fleurs du mal (The Flowers of Evil), first published in 1857, "expresses the changing nature of beauty in industrializing Paris during the 19th century." 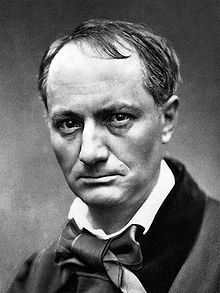 "Known for his highly controversial and often dark poetry, Baudelaire's life was filled with drama and strife, from financial disaster to being prosecuted for obscenity and blasphemy.  Long after his death many look upon his name as representing depravity and vice: others see him as being the poet of modern civilization, seeming to speak directly to the 20th century".

In 1841 his stepfather sent him on a voyage to Calcutta, India "in the hope of ending his dissolute habits".  The voyage took him around the Cape of Good Hope at the southern tip of Africa (where his ship, the Paquebot des Mers du Sud was damaged in a storm) when he would surely have seen albatrosses at sea.  He left the ship in Mauritius and then returned to France:  "the trip provided strong impressions of the sea, sailing, and exotic ports, that he later employed in his poetry" (click here).

Baudelaire's poem L'Albatros appeared in the first edition of Les Fleurs du mal and tells of the plight of an albatross caught and brought aboard a ship, comparing it to the poet "stranded on the earth".  It has been reported that this poem was based on personal experience and his concern for the bird during his journey to and from Mauritius and Reunion in 1841.

Sometimes for sport the men of loafing crews
Snare the great albatrosses of the deep,
The indolent companions of their cruise
As through the bitter vastitudes they sweep.

Scarce have they fished aboard these airy kings
When helpless on such unaccustomed floors,
They piteously droop their huge white wings
And trail them at their sides like drifting oars.

How comical, how ugly, and how meek
Appears this soarer of celestial snows!
One, with his pipe, teases the golden beak,
One, limping, mocks the cripple as he goes.

The Poet, like this monarch of the clouds,
Despising archers, rides the storm elate.
But, stranded on the earth to jeering crowds,
The great wings of the giant baulk his gait.

Click here to view a video clip of an animated Baudelaire reciting his poem.

Click here to read a poem on an albatross with a similar theme by the Mexican poet Eduard Langagne.