With the support of a Captain Simpson Scholarship from the Royal Naval Birdwatching Society I commenced a demographic study of Southern Giant Petrels on Gough Island in the South Atlantic, the species' most northerly breeding population in 2010 (click here).  As part of the study, measurements were taken from paired incubating birds in an endeavour to sex them, the results of which have now bwen published in the Society's annual report Sea Swallow.

Southern Giant Petrels Macronectes giganteus of Gough Island show marked sexual dimorphism in bill measurements with no overlap in culmen.  Recaptured incubating birds assigned as males showed considerable wear to their metal bands within seven years whereas bands worn by assigned females showed no discernible wear over the same time period.  This is thought due to the more terrestrial foraging behaviour of males as against the more at-sea foraging behaviour of females.  Eight birds colour-banded at Gough were seen at sea off Tristan da Cunha, c. 400 km away, while still breeding. 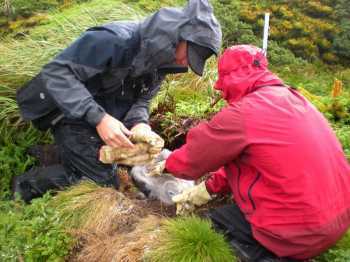