Review of parasites, pathogens and diseases of albatrosses and petrels produced by ACAP

The Albatross and Petrel Agreement has made available on-line a short paper that summarizes 33 published studies of parasites, pathogens and diseases of albatrosses and large petrels and also includes a brief description of on-going work.  The nine-page document (BSWG4/STWG6 Doc 07) was prepared by Dr Flavio Quintana of the National Research Council of Argentina (CONICET) and Wildlife Conservation Society Argentina.  It was considered at the recent Joint Meeting of ACAP's Breeding Sites and Status & Trends Working Groups held last month in Guayaquil, Ecuador.

Although they often breed on remote islands far from continents, albatrosses and large petrels are not beyond the effects of parasites or pathogens.  An infection that is widespread in a population can have major ecological consequences and has the potential to cause rapid population declines.

To date, few outbreaks of infectious diseases have been reported for albatross and large petrel species.  One of the reasons for this could be the isolation, cold climate and reduced numbers of vectors present at breeding colonies. However, recent studies suggest that pathogens causing infectious diseases are present in such colonies and that on-going environmental change could facilitate their increased prevalence and risk of establishment.

The Joint Working Group meeting requested that published and unpublished data on parasites, pathogens and diseases of albatrosses and petrels be sent by members of the new ACAP Population and Conservation Status Working Group (PaCSWG) to Flavio Quintana.

The review will then be updated for presentation at the first meeting of the new working group at the time of the Seventh Meeting of the ACAP Advisory Committee, due to be held in 2013. 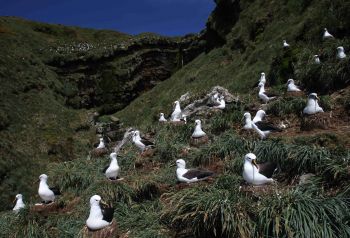