Much like the airplanes that many of us rely on for transport to far and away places, albatrosses also require suitable ‘take off' and ‘landing strips' from which to access their breeding colonies.  As a result, they often choose nesting sites with favourable wind conditions.  For the majority of the world's albatross species, this thankfully occurs on uninhabited islands where competition with human aircraft for these prime locations is scarce.  However, in Hawaii, USA in the North Pacific several growing Laysan Albatross Phoebastria immutabilis populations on the islands of Oahu and Kauai have chosen various airfields as their nesting locations, much to the dismay of those in charge of maintaining aircraft and human safety.  Thankfully, the site with the largest number of nesting albatrosses, the U.S. Navy's Pacific Missile Range Facility (PMRF) on the west coast of Kauai, has come up with an innovative solution to discourage nesting.

The U.S. Navy has a requirement to discourage albatrosses from nesting around airfields in order to reduce the bird strike hazard to aircraft.  Adults that are encountered near the runway at PMRF are captured, driven across the island to the Kilauea Point National Wildlife Refuge and released in the hopes of discouraging them from returning.  Despite this, approximately 75 albatrosses attempt to nest annually at PMRF, and as a result of the conflict this creates with military aircraft, the eggs are removed from the nests.  Previously, these eggs were legally destroyed or donated for research purposes.  However, in 2006 a programme was initiated with biologists from the U.S. Fish and Wildlife Service to help save some of these nests by temporarily incubating the eggs collected at PMRF until suitable ‘foster nests' could be found in the albatross colony on Kauai's north shore.

Once eggs are collected at PMRF, biologists visit every suitable wild albatross nest on-island and candle each egg to determine its viability.  Candling is the procedure of shining a bright light through the shell to illuminate the interior of an egg.  The name is derived from the historic practice of using wax candles to illuminate the egg to determine viability or assess development.  Because candling must be done in the dark, a black hood was used to accomplish this during daylight hours.  A shield was placed between the bird and biologist to remove the egg with minimal disturbance to the incubating adult and prevent the adult from accidentally striking its own egg. 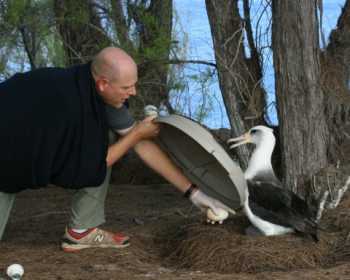 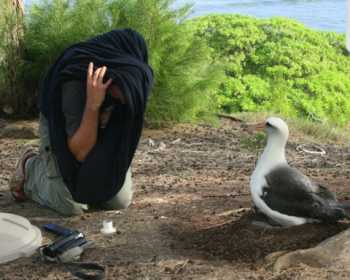 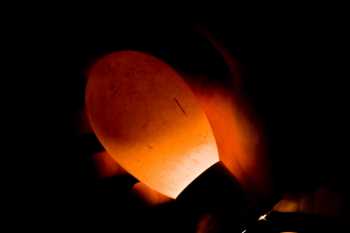 Once suitable foster parent nests are identified (i.e. those with an unviable egg), eggs are transferred from the artificial incubator at PMRF to their new foster nest where their reproductive outcome is tracked until the chicks fledge.

This programme is now in its sixth year and has saved hundreds of Laysan Albatross eggs from being destroyed as well as increasing the species' overall productivity on Kauai.  Although some eggs are still destroyed as there are simply not enough foster parents available, it is hoped that they will be able to be sent to other islands in the future as the albatross egg-swap programme expands.