Efforts by the island-based NGO partner of BirdLife International have been made to eradicate invasive Norway Rats Rattus norvegicus on islands and islets in the Samuel Islands Group, Choiseul Sound, Falkland Islands (Islas Malvinas)* over the last two years. 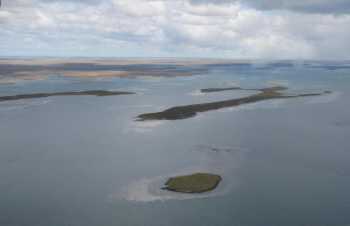 On 16 May 2011 a post-baiting check by Sally Poncet and Ken Passfield of the Beaver Island Landcare Group looked for fresh rat sign and deployed chewsticks on all five islands in the group.  No fresh rat sign was observed although there it was obvious that rats were once abundant on Big Samuel Island.  Old burrows were found in most of the coastal areas searched and shell fragments (mussels and limpets) were still present in some burrows, although no rat droppings were found.

Chewsticks (pine wood sticks soaked in sunflower oil) were positioned at sites where rat sign had been recorded prior to baiting and/or at sites where rats would be likely to be found (e.g. sheltered beaches and near freshwater and food sources).  These chewsticks will serve as additional indicators when carrying out the final check of rodent status (scheduled two to three years after baiting) in order to confirm eradication success.  They will be examined at the final post-baiting check in spring/summer 2011/12.

During the survey approximately 18 old Southern Giant Petrel nests were seen of which at least two appeared to have been in use during the previous 2010/11 season.  Breeding is expected to be confirmed during the planned summer visit.

One year previously Governor Island (270 ha) in the Beaver Island Group (an Important Bird Area in the Falkland Islands/ Islas Malvinas*) was hand-baited with diphacinone in August 2008 by the Beaver Island Landcare Group.  The island was checked in April 2010 and again in May 2011 when no signs of rats were seen.  The island supports a large breeding colony of Southern Giant Petrels, estimated as 300 pairs in 2003.

The Southern Giant Petrel breeding population of the Falkland Islands (Islas Malvinas)* in 2004/05 was estimated to be approximately 19 529 pairs (range 18 420 - 20 377) breeding in 38 locations around the islands, with colony size varying from one to 10 936.  An updated survey is currently being collated.