UPDATED: Standing tall: albatross statues and memorials around the World

The series of occasional articles in ACAP Latest News on albatrosses and petrels in art and culture continues with a look at albatross statues and memorials.  I know of only three such, two of which I have visited.

This statue of a Waved Albatross Phoebastria irrorata stands near the public jetty in the town of Puerto Ayora on Santa Cruz in the Galapagos Islands of Ecuador.   The poem on its plaque reads:

The sea is our life

As fragile as a child, we must be careful of every step
so as not to break that which is beautiful, bountiful
and the soul of our inspiration

I as yourself, magical bird, must live
within the limits of nature because in time
all else weathers.

Thank you for living among you
Islands, fauna, flora of Galapagos. 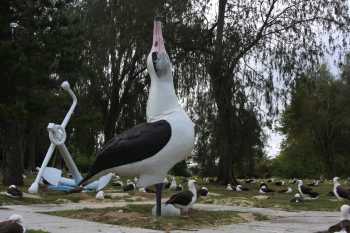 In the North Pacific this wooden statue of a Laysan Albatross or "gooney" P. immutabilis standing over its egg resides alongside Nimitz Avenue near Midway Mall on Sand Island, part of the USA's  Midway Atoll National Wildlife Refuge. 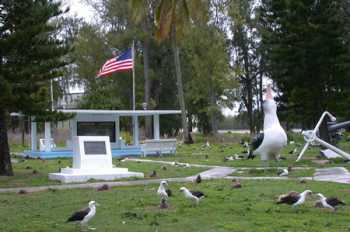 Photograph from U. S. Fish and Wildlife Service

The statue was carved in 1972 from a 30-foot [9-m] mahogany log by a navy dentist, Lieutenant Commander Robert C. Cook, who was stationed on Midway.  The 12-foot [4-m] bird now forms part of the island's Navy Memorial which was erected in 1995 to commemorate the defenders of the island during the WWII Battle of Midway in June 1942.

"The statue succumbed to termites last year and had to be temporarily removed from the site near the Navy Memorial here at Midway.  The Friends of Midway Atoll NWR [FOMA] is hoping to raise money to fabricate a new one." 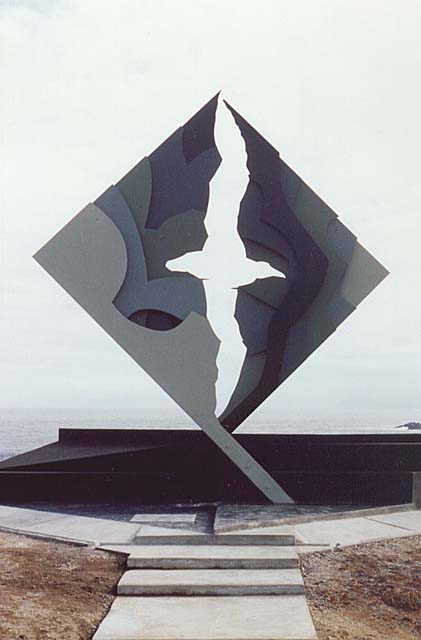 In addition to these two reasonably life-like statues, a more stylistic silhouetted albatross in flight stands seven metres high on a hill top 50 m above sea level on Isla de Hornos near Cape Horn in Chile.  The steel Monumento Cabo de Hornos (Cape Horn Memorial) was made by the sculptor José Balcells and was inaugurated in December 1992.  It was erected through the initiative of the Chilean Section of the Brotherhood of Cape Horners "in memory of the men of the sea from every nation that lost their lives fighting against the merciless forces of nature of the Southern Ocean that prevail in the vicinity of the legendary Cape Horn". 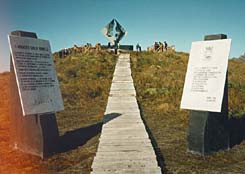 A marble plaque mounted near the statue carries the following poem:

I, the albatross that awaits at the end of the world...
I am the forgotten soul of the sailors lost
rounding Cape Horn from all the seas of the world.
But die they did not in the fierce waves,
for today towards eternity, in my wings they soar,
in the last crevice of the Antarctic winds.

Are there any more albatross statues out there?

With thanks to Andrea Angel for her translation and to Lindsay Young for her photograph of the Midway gooney.