In 2000 I visited Midway Atoll in the North Pacific on an excursion after the Second International Conference on the Biology and Conservation of Albatrosses and other Petrels that had been held in Honolulu, Hawaii in May that year.  While on the island I was appalled by the many corpses of Laysan Albatross Phoebastria immutabilis chicks strewn around with their body cavities crammed with plastic debris fed to them by their parents, including cigarette lighters, bottle tops, toothbrushes and even toy soldiers and action heroes.  This led to my co-authoring a paper on colour selection by North Pacific albatrosses, suggesting that they prefer red, pink and orange cigarette lighters to blue and green ones, presumably mistaking them for edible prey (click here).  It is clear that a decade later the problem has not gone away.

Chris Jordan Photographic Arts of Seattle, USA has published on-line an evocative photo essay called "Midway: Message from the Gyre" that depicts corpses of albatross chicks on Midway with their decaying bodies crammed with plastic debris.  The project is described by the photographer:

"[f]or me, kneeling over their carcasses is like looking into a macabre mirror. These birds reflect back an appallingly emblematic result of the collective trance of our consumerism and runaway industrial growth.  Like the albatross, we first-world humans find ourselves lacking the ability to discern anymore what is nourishing from what is toxic to our lives and our spirits.  Choked to death on our waste, the mythical albatross calls upon us to recognize that our greatest challenge lies not out there, but in here." 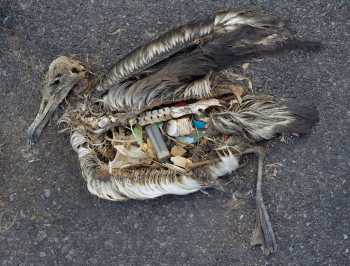 Meanwhile the marine debris from the Japanese tsunami gets ever closer to the albatross islands of the North Pacific (click here) leading US Senator for Hawaii, Daniel Inouye to call for more funding to help clean up the debris (click here).

Photographs by Chris Jordan from his Midway photo-essay are included here by permission granted under a Creative Commons license.  He is also producing and directing a film on Midway and its albatrosses (click here).