The Critically Endangered Tristan Albatross or Gony Diomedea dabbenena is endemic to the Tristan da Cunha island group in the South Atlantic, where it breeds on Gough and Inaccessible Islands, which together form a World Heritage Site.

Practically the whole species' population breeds on Gough, where its chicks are at risk to attacks by the introduced House Mice Mus musculus.  A tiny remnant continues to breed on rodent-free Inaccessible, with just one pair discovered incubating on Gony Ridge on the island's plateau earlier this year (click here).

In September/October a three-week expedition to Inaccessible led by Peter Ryan from the Percy FitzPatrick Institute, University of Cape Town, confirmed that the egg had hatched.  The chick (the first reported since 1999) is expected to fledge in the next month or so.  At the request of Trevor Glass, Tristan Conservation Department, the chick was metal-banded on 3 October. 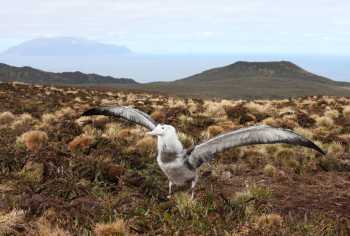 In the 1870s, Inaccessible held a stated 200 annually breeding pairs of Tristan Albatrosses, but the island's population is thought to have been brought to the edge of extinction by feral domestic pigs Sus scrofa, now eradicated.  Whether the population will ever recover is moot, but the successful eradication of Gough's mice might one day lead to sufficient recruitment between the islands to keep the Inaccessible population alive.