Sexual segregation: female albatrosses and petrels in the Southern Ocean feed to the north of males

Richard Phillips (British Antarctic Survey) and colleagues writing in the Journal Marine Biology have looked at differences in diet and distribution of female and male albatrosses and petrels.

"Considerable attention has focused on inter- and intraspecific variation in trophic niches of marine predators.  Although this has revealed evidence for sexual segregation in distribution in some species, few studies have been able to address sex-related dietary specialisation.  Stable isotope analysis of blood cells collected from albatrosses and petrels at South Georgia during chick-rearing indicated a difference in _13C, suggesting that females fed to the north of males, only in two species with male-biased sexual size dimorphism; in no species did sexes differ in trophic level (_15N).  Based on a wider review, significant differences between sexes in isotope signatures were much more common in seabirds during the pre-laying or breeding than the nonbreeding period, presumably reflecting greater between sex partitioning of resources when foraging ranges are more constrained and competition is greater.  Sex differences, or their absence, were usually consistent across successive stages during the pre-laying and breeding periods, but not necessarily year-round nor between populations.  Significant differences in isotope signatures between males and females were extremely rare in monomorphic species, suggesting a link between sexual size dimorphism and segregation in diet or distribution.  Among the Southern Ocean albatrosses, sex differences in _13C suggested the underlying mechanism was related to habitat specialisation, whereas in other size-dimorphic taxa (both male- and female-biased), sex differences were more common in _15N than _13C and therefore more consistent with size-mediated competitive exclusion or dietary specialisation." 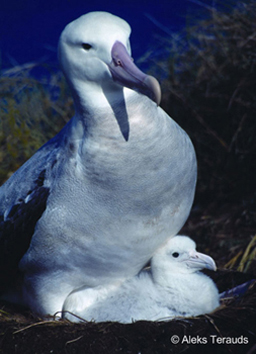