North Pacific albatrosses have been in the news of late, especially the Short-tailed Albatross Phoebastria albatrus, with the first American chick doing well on Midway and the first translocated fledgling returning to Mukojima Island.

The Pacific Seabird Group will hold its 38th Annual Meeting in Honolulu, Oahu, Hawai'i, planned for February 2012.  Attendees at the PSG meeting should have the opportunity to see some North Pacific albatrosses up close for themselves, as Laysan Albatrosses P. immutabilis breed on Oahu in the Ka'ena Point Natural Area Refuge, a site open to the public, and which is currently being protected by a predator-proof fence. 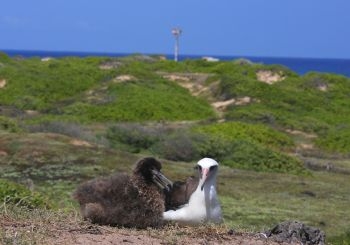 Breeding Laysan Albatrosses can also be viewed at the Kīlauea Point National Wildlife Refuge on the nearby Hawaiian island of Kauai.

The deadline for submitting suggested topics for a special paper session or a symposium (to Kim Rivera at This email address is being protected from spambots. You need JavaScript enabled to view it.) for the 2012 PSG meeting is 15 May 2011 (click here to access the guidelines).