Another ACAP exclusive, and another Short-tailed Albatross nest in Hawaii

It appears that Hawaii is becoming a hot destination for Short-tailed Albatrosses Phoebastria albatrus in 2010.

Despite numerous sightings of this species in the Hawaiian Archipelago over the last several decades, there are no records (either historically, or in the fossil record) of the species breeding in Hawaii.  This changed on 31 October this year when an occupied Short-tailed Albatross (STAL) nest was discovered on Kure Atoll (click here to follow news of the Kure nest on this web site).  However, despite the presence of two birds at the nest, the fact that two eggs were laid strongly suggests a female-female pair - which has a lower likelihood of laying fertile eggs, particularly since a male has not yet been observed on the island.

A nest belonging to an assumed male-female pair of Short-tailed Albatrosses has now been discovered on Midway Atoll, the next closest island to Kure Atoll. 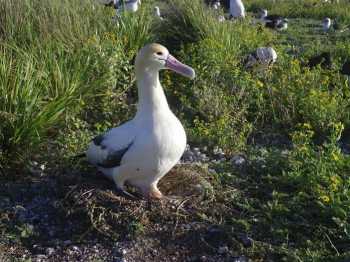 On the afternoon of 16 November 2010, John Klavitter, a U.S. Fish & Wildlife Service (USFWS) staff member, observed an adult-plumaged Short-tailed Albatross incubating a freshly-laid egg on Midway's Eastern Island, the uninhabited portion of the atoll.  The bird was located in the centre of the STAL decoy plot which was initiated in 2000.  A total of 42 lifelike models of STALs, initially boosted with recorded calls, were set up after a single STAL had been regularly returning to the site in the hope they would attract more birds, and it appears that the effort has paid off.

The adult-plumaged bird incubating the egg is a presumed male that has been returning to the site annually since 2000 and was banded (130-01819) as a fledgling on Japan's Torishima Island in 1987.  In 2007 the presumed female of the pair, banded (3B2411) as a fledgling in 2003 on Torishima and still in sub-adult plumage, began returning to Midway and both birds have been observed displaying together and preening each other each year since then.  In 2009 they arrived in October and built a nest cup, but no egg was ever observed.  Although the female of the pair has not yet been observed this season, it is assumed that she is the individual that laid the egg.  The plot was not monitored from 6-15 November this year and it is thought that the female STAL arrived during this period to lay.

Whereas the sexes are not easily distinguishable in this species, refuge staff members are relatively confident in their assignment of sexes of this pair based on the fact that the adult-plumaged bird seems large and has never laid an egg since it was first seen in 2000, and that the sub-adult plumaged bird appears smaller in comparison.  Slight morphological size differences between the sexes have been recorded in this species.

A single female laid and then abandoned infertile eggs close to Frigate Point on Sand Island, Midway Atoll from 1989-2001 (and was last seen there in 2003), but there was no indication of a male ever attending the nest site (click here).  Sightings of Short-tailed Albatrosses on Midway begun as early as 1938 and from 1965-2009 at least 16 different individuals have been recorded ashore.  In recent years, up to four individuals have been seen on the atoll at any given time.  Sporadic sightings of Short-tailed Albatrosses have also been made at Pearl and Hermes Atoll, Laysan Island, French Frigate Shoals and twice on Kauai in recent years, all islands in the Hawaiian Archipelago.

This web site will keep you posted on when the second Midway bird arrives, and on the eventual outcome of this first definite breeding attempt for the Short-tailed Albatross within the Hawaii Archipelago and in the USA.

For information on records of Short-tailed Albatrosses within the Hawaiian Islands visit: