During a two-day stopover at the main island of Tristan da Cunha 413 km from Gough Island from 30 September to 2 October 2010 repeated daytime counts were made of Southern Giant Petrels Macronectes giganteus attracted by recreational fishing activities aboard the m.v. S.A. Agulhas anchored 750 m offshore of the settlement of Edinburgh of the Seven Seas.  All giant petrels observed were visually checked with binoculars for the presence of both metal and colour bands and attempts made to identify and photograph any colour bands seen.

Up to nine Southern Giant Petrels at a time could be checked for the presence of colour bands from the ship lying off Tristan.  Three birds (A20, C80 and D15) colour banded as incubating birds on Gough Island were observed off Tristan.  The elapsed periods were respectively 19, 8 and 3 days after banding.  The first two of these birds were photographed with their bands clearly legible.  In all three cases the three birds were the smaller members of the breeding pair and are thus assumed to be females of this highly dimorphic species.  All the birds observed closely from the ship appeared to be of much the same size as the colour-banded birds when seen next to them, suggesting they too were all females. 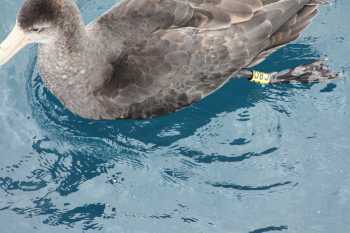 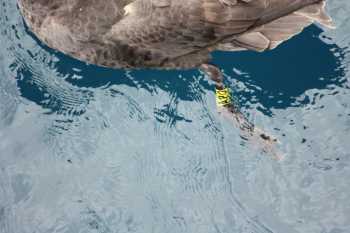 Thanks to Stephen Lucocq and Graham Parker for observations and photographs, and to the Royal Naval Birdwatching Society for the award of a Captain Simpson Scholarship to John Cooper to study the giant petrels of Gough Island.  Logistical support was received from the South African National Antarctic Programme of the Department of Environmental Affairs.