A demographic study of Southern Giant Petrels Macronectes giganteus has been started on Gough Island in the South Atlantic, the species' most northerly breeding locality.

There are three major breeding sites on the island, and the one closest to the South African weather station (but still a four-hour walk away) below Low Hump on the west coast has been chosen for the long-term study.

Over a three-day period this week, 162 nests occupied by incubating birds were staked with numbered poles.   The birds present are being both metal and colour-banded.  In addition all the incubating birds were photographed and their bill measurements taken to aid in sexing (giant petrels exhibit strong sexual dimorphism, with males being markedly larger than females).

Return visits to the colony will be made at three- to four-day intervals to record and band partners over the next few weeks.  Later in the year, the surviving chicks will be banded.

It is hoped the new study will continue for a number of years, to allow information such as age at first breeding and fidelity to mate to be ascertained. 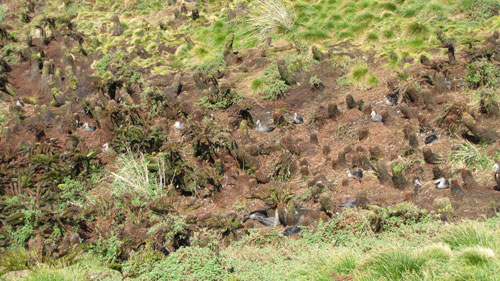 The study has been funded by a Captain Simpson Scholarship awarded to John Cooper by the Royal Naval Birdwatching Society.  The support of the Royal Society for the Protection of Birds, the South African National Antarctic Programme and the Tristan Conservation Department is gratefully acknowledged.