The Macquarie Island Pest Eradication Project is about to get underway after a number of years of planning.  Aerial baiting of the island is scheduled for June this year.  The Aurora Australia is set to travel to the island from Hobart, Australia next month - with 305 tonnes of poison bait and four Squirrel helicopters aboard.

The project aims to eradicate rats, rabbits and mice from the island, although specially trained dogs will be used from later in the year as it is not expected that the poison will kill all the rabbits.  If the eradication exercise is wholly successful, Macquarie will be the largest island by far from which the House Mouse Mus musculus has been eradicated.  Success will help support the planned eradication of mice on Gough Island in the South Atlantic - where they kill large numbers of Tristan Albatross Diomedea dabbenena chicks every year.

Removal of alien mammals from Macquarie will result in vegetation recovery and reduced erosion, indirectly helping conserve ACAP-listed species such as the Grey-headed Thalassarche chrysostoma and Black-browed T. melanophris Albatross; as well as burrow-nesting species at risk to rodent predation, including the ACAP-listed Grey Petrel Procellaria cinerea. 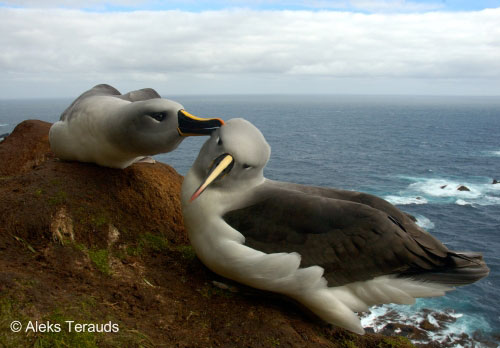 News on the eradication programme can be followed by reading the Macquarie Dispatch, the project's newsletter.  No. 5 of March 2010 (and all earlier issues) is available by e-mail or by visiting http://www.parks.tas.gov.au/index.aspx?base=13001.