Nightingale Island is the smallest and oldest of the three islands in the Tristan da Cunha archipelago in the South Atlantic. It is also the only island in the group to have offshore islands that are significant for seabirds. These islets are seldom visited, and most of what we know of their avifauna dates back to Mike Richardson's observations in 1973 (Richardson 1984). Alex or Middle Island, located less than 200 m north of Nightingale, is especially important for Northern Rockhopper Penguins Eudyptes moseleyi, but Richardson estimated that it supported 100-200 pairs of ACAP-listed Atlantic Yellow-nosed Albatrosses Thalassarche chlororhynchos (Mollies) and tens of thousands of pairs of Great Shearwaters Puffinus gravis. Stoltenhoff Island, 800 m north-west of Alex Island, is a taller island, with 50-m cliffs around much of its coastline. Landing is only possible at the extreme western end of the island, and requires exceptionally calm conditions. It has no penguins, but Richardson estimated it supported 500 pairs of Yellow-nosed Albatrosses, 25-50 pairs of ACAP-listed Sooty Albatrosses Phoebetria fusca as well as tens of thousands of pairs of Great Shearwaters. 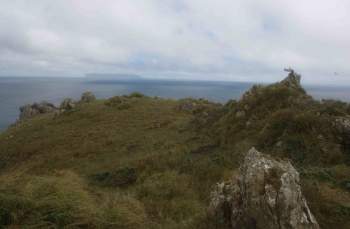 Atlantic Yellow-nosed Albatrosses on Stoltenhoff Islet with Inaccessible Island in the background.  Photograph by Peter Ryan

We visited both islets in early December 2009 (see Ryan et al. 2011). Counting was hampered by the rugged terrain and dense cover of Spartina arundinacea tussock grass. However, we covered both islets quite carefully and although Great Shearwaters remained abundant, we counted only 40 pairs of Atlantic Yellow-nosed Albatrosses on

Alex Island, and 210 on Stoltenhoff. Only six pairs of Sooty Albatrosses were found on Stoltenhoff's cliffs. Assuming Richardson's estimates were accurate, this suggests that the numbers of Mollies have fallen by roughly 60% over the last 36 years, whereas Sooty Albatrosses have fallen by 80-90%. Some of the decrease on Alex Island might be a result of exploitation by Tristan Islanders (Richardson 1984), but birds on Stoltenhoff have seldom been exploited due to the difficulty of landing on the island. Their decreases probably result from increased mortality at sea, presumably linked to fishing activity.