With some exceptions, albatrosses currently face few threats on land, and the widespread population declines in many species have been attributed primarily to incidental mortality in marine fisheries.  Although there is no doubt that many albatrosses are killed behind fishing vessels, there is often a lack of information on which fleets are responsible; how fast birds are being killed; where, when and exactly how the mortality is occurring, and; which age class or status of bird is most vulnerable to capture.  In 2004, comprehensive surveys of all islands of South Georgia (Islas Georgias del Sur) in the south-west Atlantic Ocean revealed that breeding pairs of Wandering Albatrosses Diomedea exulans had declined by an average of 1.8% per year in the previous two decades.  At the main site, Bird Island, annual monitoring indicates a halving of the population since the early 1960s (1% decline per year to the late 1990s, and a 4% decline per year thereafter).

The only two larger breeding populations of this species, at Iles Crozet and the Prince Edward Islands in the south-west Indian Ocean, have, by comparison, shown some recent recovery after earlier declines.

Research being carried out at Bird Island is attempting to understand the underlying causes of decline in the local population.  Land-based threats to Wandering Albatrosses at South Georgia (Islas Georgias del Sur) are negligible, and breeding success is high and on average has increased since the late 1970s.  Detailed demographic monitoring at Bird Island indicates that survival of adults decreased by 1-2%, and of juveniles has approximately halved since the mid to late 1990s.  Tracking data indicate that adults from South Georgia (Islas Georgias del Sur) have probably the widest non-breeding distribution of any albatross, hence greatly overlap with Wandering Albatrosses that breed on islands in the Indian and Pacific Oceans.  Much less is known about the distribution of juveniles, which from the analysis of return rates to the colony are potentially even more vulnerable to bycatch in fisheries. 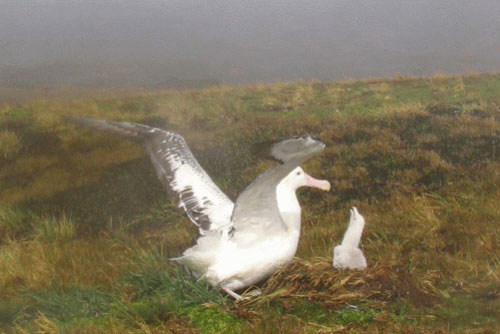 In order to address this lack of knowledge, satellite-transmitters were attached in early December 2009 to 12 Wandering Albatross chicks at Bird Island.  The devices are duty-cycled to transmit for 12 hours on, 36 hours off, in order to preserve battery life in the hope that locations will be available for several months.  The project has started well; all chicks fledged successfully, and although one device has already stopped transmitting, it may have been pulled off by the bird's powerful beak, or that chick may have died.  This would not be unusual, as the risk of mortality is greater during the days immediately after fledging when the bird is learning to fly and feed, than at any other time in an albatross's life.  Only time will tell if the rest of the tracked birds will successfully make it through this critical period.

The project was part-funded by grants from the Antarctic Research Trust and the International Association of Antarctica Tour Operators (IAATO) Protect Our Poles Fund.