The Scientific Committee of the Indian Ocean Tuna Commission (IOTC) has published online (click here) the report of its Twelfth Session, held in Victoria, Seychelles over 30 November to 4 December 2009.

The Scientific Committee's report notes that the northerly range of vulnerable seabirds in the Indian Ocean was greater than previously acknowledged, and as a consequence endorsed the SC's Working Party on Ecosystems and Bycatch (WPEB) recommendations on seabirds listed in the report of its 2009 meeting, particularly highlighting the recommendation to extend the area in which longliners are required to use mitigation measures farther north from latitude 30°S to 25°S.  This recommendation was based on newly provided information on the at-sea distribution of juvenile albatrosses and petrels.

Consequently, the Scientific Committee recommended to the Commission that IOTC Resolution 08/03 "On reducing the incidental bycatch of seabirds in longline fisheries" by slightly amending its Paragraph 3 to include this new latitudinal limit.  The proposed Paragraph 3 will then read:

"CPCs shall ensure that all longline vessels fishing south of 25°S use at least two of the mitigation measures in Table 1 below, including at least one from Column A.  Vessels shall not use the same measure from Column A and Column B." 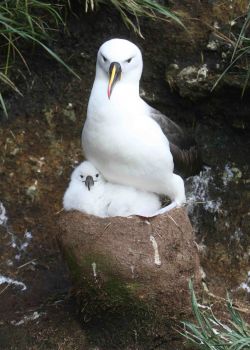 The Scientific Committee regretted that no update on National Plans of Action - Seabirds from IOTC members were presented at the 2009 WPEB meeting.  The SC also noted that few countries had reported on incidental bycatch of seabirds and reminded them that it is mandatory that all members report on non-IOTC species, including seabirds.

An Executive Summary on the Status of Seabirds was adopted by the Scientific Committee for the first time in 2009 (see Appendix VI of the SC's 2009 report, pp. 181-186), outlining the current state of knowledge for seabird distributions, the current understanding of interactions between IOTC fisheries and seabirds, current management concerns, management measures currently in place by the IOTC to enhance the conservation of seabirds, and gaps in our knowledge of fishery impacts with seabirds.