Another island at risk? Mice have commenced to attack albatross chicks on sub-Antarctic Marion Island UPDATED

A paper published on-line in 2009 and in the February 2010 issue of the journal Antarctic Science by researchers at the Percy FitzPatrick Institute, University of Cape Town, South Africa has shown that it is not only Gough Island in the South Atlantic where introduced House Mice are attacking large seabirds (click here).  The problem now seems to be developing at sub-Antarctic Marion in the Southern Ocean, raising a new conservation concern for the island.

The abstract is given in full:

Introduced House Mice Mus musculus have recently been discovered to be significant predators of chicks of Tristan Albatrosses Diomedea dabbenena and several burrowing petrels at Gough Island.  We summarize evidence for mouse attacks on albatross chicks at sub-Antarctic Marion Island, where mice are also the only introduced mammal following the eradication of feral cats Felis catus in the early 1990s.  Wounds consistent with mouse attacks have been found on Wandering Albatrosses D. exulans since 2003 and Sooty Albatrosses Phoebetria fusca in 2009. To date, attacks on Wandering Albatross chicks have been infrequent, affecting <1% of chicks in study colonies, and only about half of the attacks have been fatal.  Small chicks may also die when mouse burrows collapse under chicks, trapping them.  Mouse attacks appear to be a recent phenomenon, supporting the contention that mice pose a significant threat when they are the only introduced mammal species.  Ongoing monitoring is needed to assess whether the impacts of mice increase over time.  Our observations add impetus to calls for the eradication of mice from Marion Island. 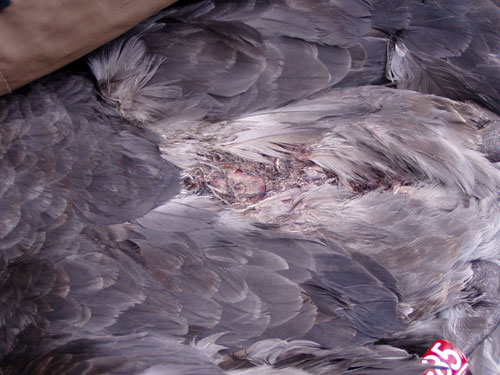 ACAP's Information Officer can tentatively add the Northern Giant Petrel Macronectes giganteus to these two albatross species, based on a characteristically wounded adult he found sitting beside a broken egg within the long-term study colony at Marion Island in September 2003.  The bird's back had a large fresh wound exposing the bone.  The bird and egg had disappeared by the next nest check a few days later.