France has announced the creation of a very large Marine Protected Area (MPA) around its sub-Antarctic islands in the southern Indian Ocean.  The new MPA will give added formal protection to the ACAP-listed albatrosses and petrels that forage within it, especially those that breed on the Crozet, Kerguelen, Saint Paul and Amsterdam Islands that the MPA surrounds. At over 1.66 million km² in area, it is larger than the 1.55 million-km² Ross Sea MPA, due to come into force in December this year, and is now the World’s largest MPA.

Following on from existing MPAs around Australia’s Heard and McDonald Islands and South Africa’s Prince Edward Islands, all the sub-Antarctic island groups in the southern Indian Ocean are now surrounded by MPAs, totalling over 1.81 million km². 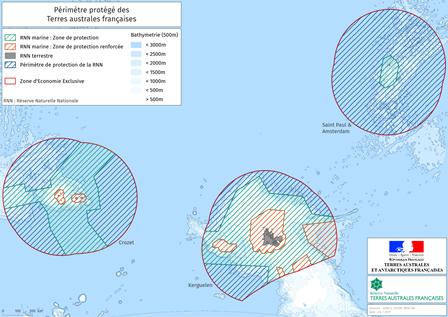 The new French Marine Protected Area around its sub-Antarctic islands

A translation of the original press announcement follows:

At [a meeting of] the Consultative Committee for the French Southern Territories National Nature Reserve on 15 December 2016, which enabled the nature reserve to be set up with its new perimeter [with an area] of more than 672 000 km², the Minister of the l’Environnement, de l’Energie et de la Mer, Mme Segolene Royal, asked the Prefect, a TAAF Senior Administrator, to consider ways of creating a protection perimeter around the nature reserve.

In response to this request and following various consultations from 24 February to 24 March 2017, Prefect Pozzo di Borgo adopted on 31 March Decree 2017-28 establishing a protection perimeter around the nature reserve (click here).

This perimeter is established beyond the limits of the marine part of the French Southern Territories National Nature Reserve, to the outer limits of the Exclusive Economic Zones (EEZs) of the Crozet, Kerguelen, Saint Paul and Amsterdam Islands. The total protected area, which includes the area of the nature reserve and that of the protection perimeter, covers an area of 1 662 766 km², or nearly 15% of the French EEZ.

The order instituting the protection perimeter provides that the provisions of Decree No. 2006-1211, as amended, establishing and extending the French Southern Territories National Nature Reserve relating to reserve management bodies and those relating to environmental regulations and the management of fisheries within the marine part of the reserve, apply to the outer limits of the Southern French EEZs.

It also encourages the development of programmes to improve knowledge of the marine environment, and positions France as a key player in the development and implementation of a concerted strategy for the creation and establishment of a network of MPAs in the international waters of the Commission for the Conservation of Antarctic Marine Living Resources (CCAMLR).

The signing of this decree gives rise to the largest marine Protected Area in the World, a national ambition formulated more than a year ago by Minister Segolene Royal in the sidelines of COP21 [2015 Paris Climate Conference] and reaffirmed on numerous occasions since then.”