Greg McClelland (RSPB Centre for Conservation Science, Royal Society for the Protection of Birds, The Lodge, Sandy, United Kingdom) and colleagues have published early online in the open-access journal Marine Ornithology on using a drone to survey ACAP-listed and Critically Endangered Tristan Albatrosses Diomedea dabbenena present on Inaccessible Island in the South Atlantic.

“Unmanned aerial vehicles (UAVs) offer a number of potential applications in wildlife monitoring, including the aerial surveying of seabird populations on remote islands. While UAVs may represent considerable improvements and/or cost savings over other survey techniques, such as ground searches or surveys via fixed-wing aircraft or helicopter, their use to date has been rare. The few studies that have used UAVs have employed systems that are either custom-made or beyond the budget of many small conservation programs. In this study we tested a low-budget (US$2600), off-the-shelf UAV (DJI Phantom 2) equipped with an on-board camera (GoPro Hero4) as a tool for rapidly assessing the population status of the endangered Tristan Albatross Diomedea dabbenena on Inaccessible Island, South Atlantic Ocean. The Tristan Albatross population on Inaccessible Island was estimated as one breeding pair and four additional non-breeding birds in February 2015. The UAV successfully surveyed 3.28 km2 of the island in 32.1 min flight time. While the survey was successful, future surveys would be greatly improved by some form of pre-programmed navigation capability.” 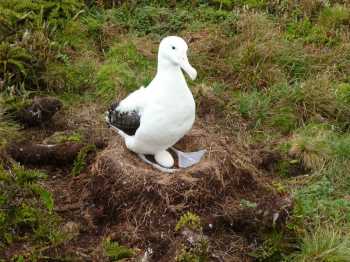