Start of a new colony? The Short-tailed Albatrosses of Midway Atoll are up to five this season 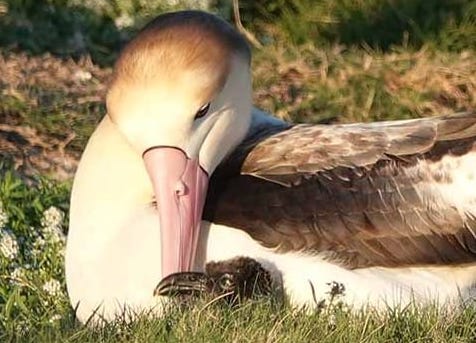 Geraldine with her 2023 chick, photograph by Caren Loebel-Fried

George and Geraldine, the sole pair of Vulnerable Short-tailed Albatrosses Phoebastria albatrus breeding on Midway Atoll, have hatched their latest egg that was laid back in October last year.  The chick was first sighted on 27 December being brooding by George, the male bird, but it may have hatched one or two days previously.  . Watch a one-minute video by U.S. Fish and Wildlife Service volunteer Catie Mahon of George and Geraldine on 10 January shortly after a nest change, with the chick being fed by the returning female, after which the male departed.  The chick is their fourth since their first known meeting in 2016; no chick was produced last year as their egg did not hatch in the 2021/22 breeding season. 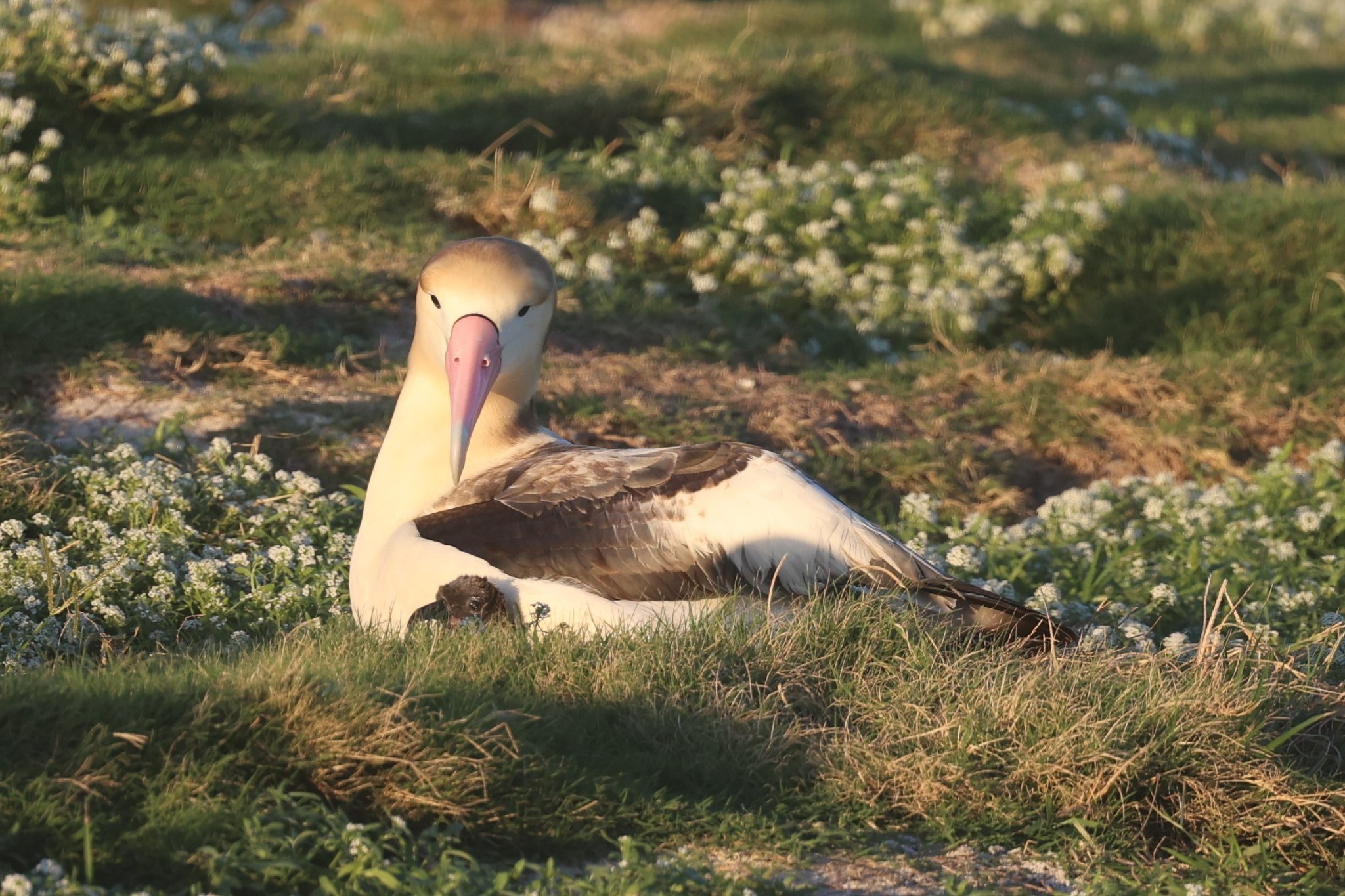 Geraldine with the 2023 hatchling, photograph by Jon Plissner, USFWS

“What's particularly exciting as well is the steady appearance of the couple's [first 2018/19, banded red AA08] chick near the nest that was present for its sibling’s hatching!  A wildlife camera funded by the Friends of Midway Atoll is focused on the nest 24/7 that gives biologists the chance to observe the chick and its parental care and feeding while also being able to document the comings and goings of the chick’s 4-year-old sibling.  It is not unusual for albatross juveniles to return to their natal island before they are sexually mature.  This week the juvenile was captured trying out his dance moves with a neighbouring Black-footed Albatross!” 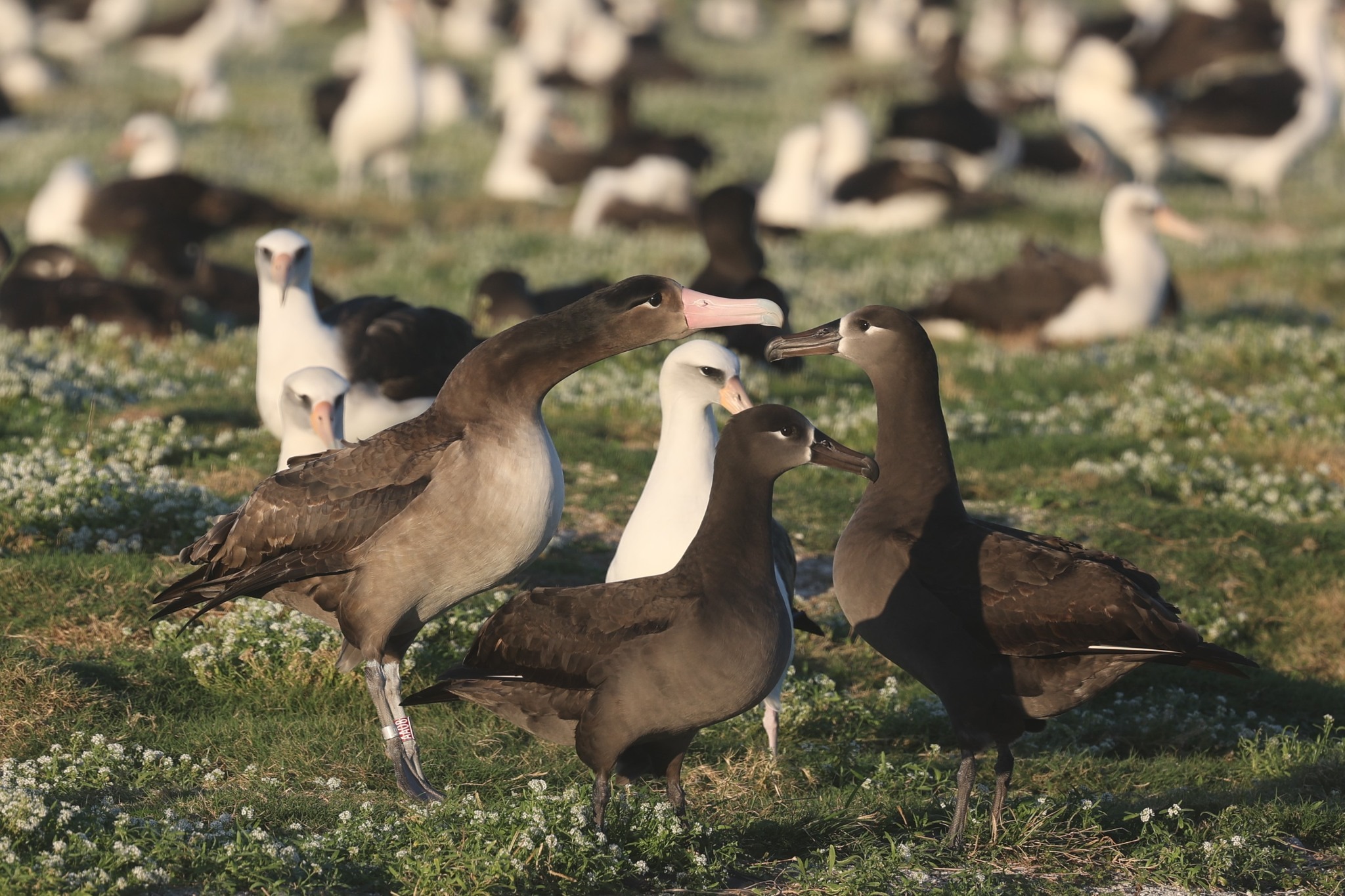 The juvenile Short-tailed Albatross up on its toes displaying to a much smaller Black-footed Albatross P. nigripes on Midway, 27 December 2022, photograph by Jon Plissner, USFWS

If the juvenile is able to find a conspecific to engage in mutual display on Midway (click here), then breeding might follow, resulting in two pairs of Short-tailed Albatrosses on the atoll.  And the most recent news of only two days ago is of another of George and Geraldine's fledglings (their second, the  2019/20 chick) has been seen back on Midway, also near its parents.  Along with a subadult banded on Torishima that has been seen elsewhere on the atoll, there are five Short-tailed Albatrosses present on Midway this season (not countiing the current chick). Start of a new colony?  Let's hope so!

Access earlier posts to ACAP Latest News on the fortunes of George and Geraldine here.

Meanwhile, to the west on Kure Attoll the field team has observed several Short-tailed Albatrosses this season but no nests according to the Kure Atoll Conservancy Facebook page. What happened to the female-female pair that laid infertile eggs on Kure some years back?