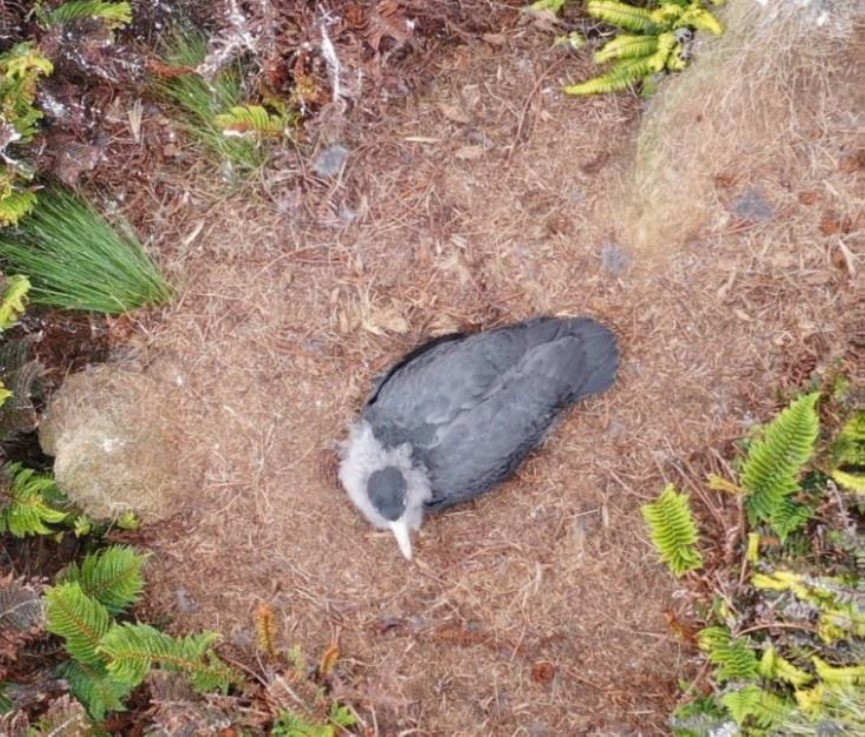 A Northern Giant Petrel chick taking no notice of the drone 5 m above its head.  The silvery grey colour of the chick’s down, plus the characteristically large cleared area the chick has created round its nest mound makes nests easy to spot from the air (from the report)

In a final report to New Zealand’s Department of Conservation via its Conservation Services Programme (CSP), Graeme Elliot and Kath Walker (Albatross Research) describe the use of both foot searches and a drone to count the numbers of Northern Giant Petrel Macronectes halli chicks on Antipodes Island over two breeding seasons.  “The drone was usually flown high and fast towards suitable habitat, then it was dropped to about 20-30 m above the ground for slower scouting for nesting giant petrels. When a nest was spotted, the drone descended lower and a photo was taken of the nest from directly above it, which automatically recorded that nest’s grid reference.”

“The number[s] of northern giant petrel chicks on Antipodes Island were counted just before they fledged during the summers of 2020-21 and 2021-22.  Counts were made on foot and through use of a drone.  The number of chicks in the two years was similar (194, 188) and using nesting success measures from Macquarie Island, estimates of the number of breeding pairs of 304 and 295 were made.  The number of northern giant petrels nesting on the island seems to have decreased and then increased since 1969 when they were first counted and this may be due to declines in the number of eastern rockhopper and erect-crested penguins nesting on the island, and an increase in the abundance of New Zealand fur seals.”