Featuring ACAP-listed species and their photographers: the Salvin’s Albatross by Graham Parker, with Matt Charteris 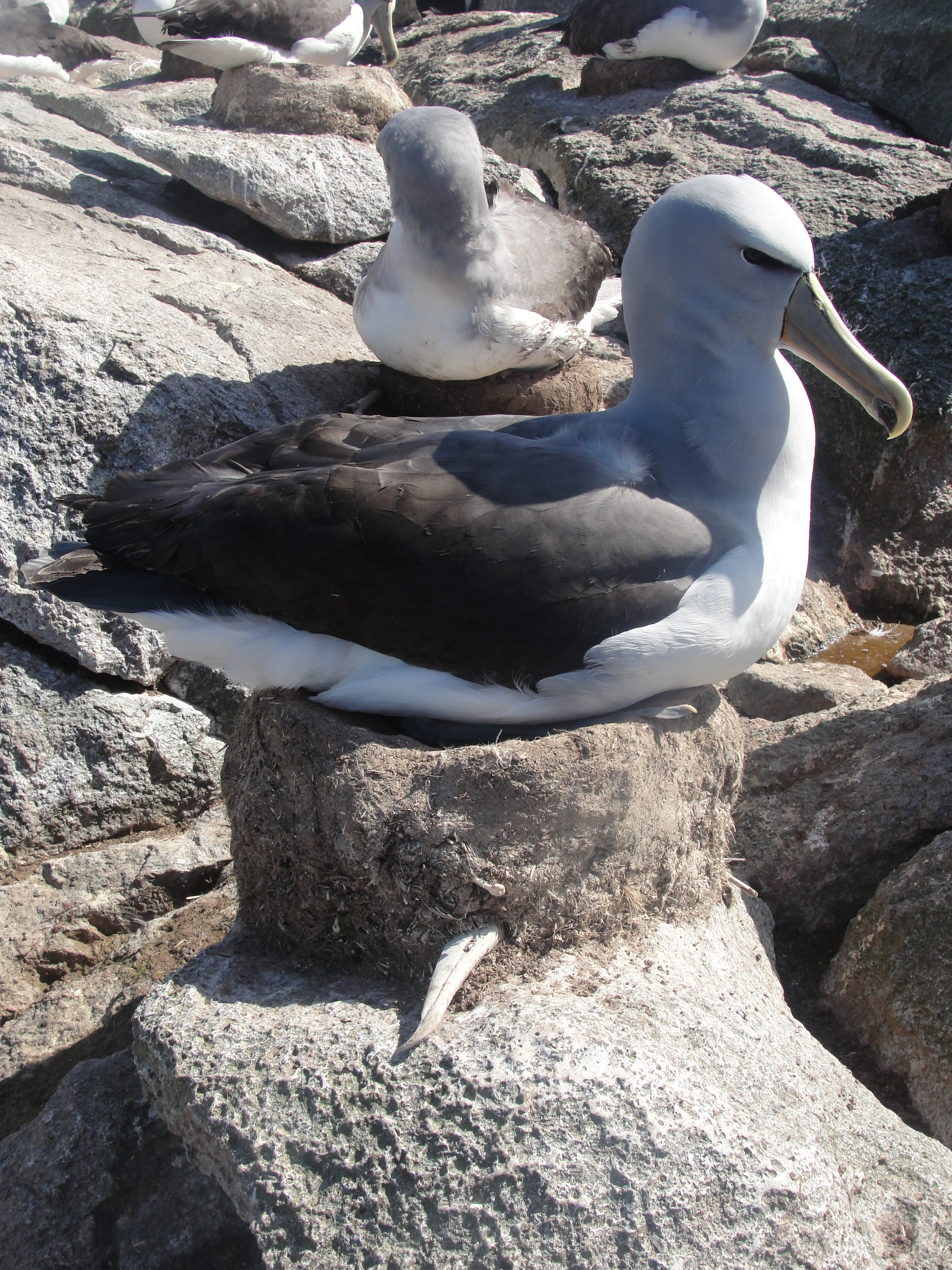 A Salvin’s Albatross perches on its pedestal nest, from which the protruding upper bill of a conspecific can be seen

NOTE:  This post completes a series that features photographs of the 31 ACAP-listed species, along with information from and about their photographers.  In this last photo essay, Graham Parker of Parker Conservation, supported by photographs taken by colleague Matt Charteris, writes about his experiences visiting and conducting research on the breeding sites of the New Zealand endemic and globally Vulnerable Salvin’s Albatross Thalassarche salvini.

It has taken a village of 31 albatross researcher/photographers around the globe and nine months of gentle cajoling to complete this series covering 31 ACAP-listed species.  Graham and Matt’s essay has been posted on the first day of a week of marking and raising awareness of World Albatross Day 2022 on 19 June.  It is hoped the varied writing styles of the authors, along with at times their stunning photographs, will offer both interesting reading and insights into what it is really like to live with albatrosses.  Thanks to you all! 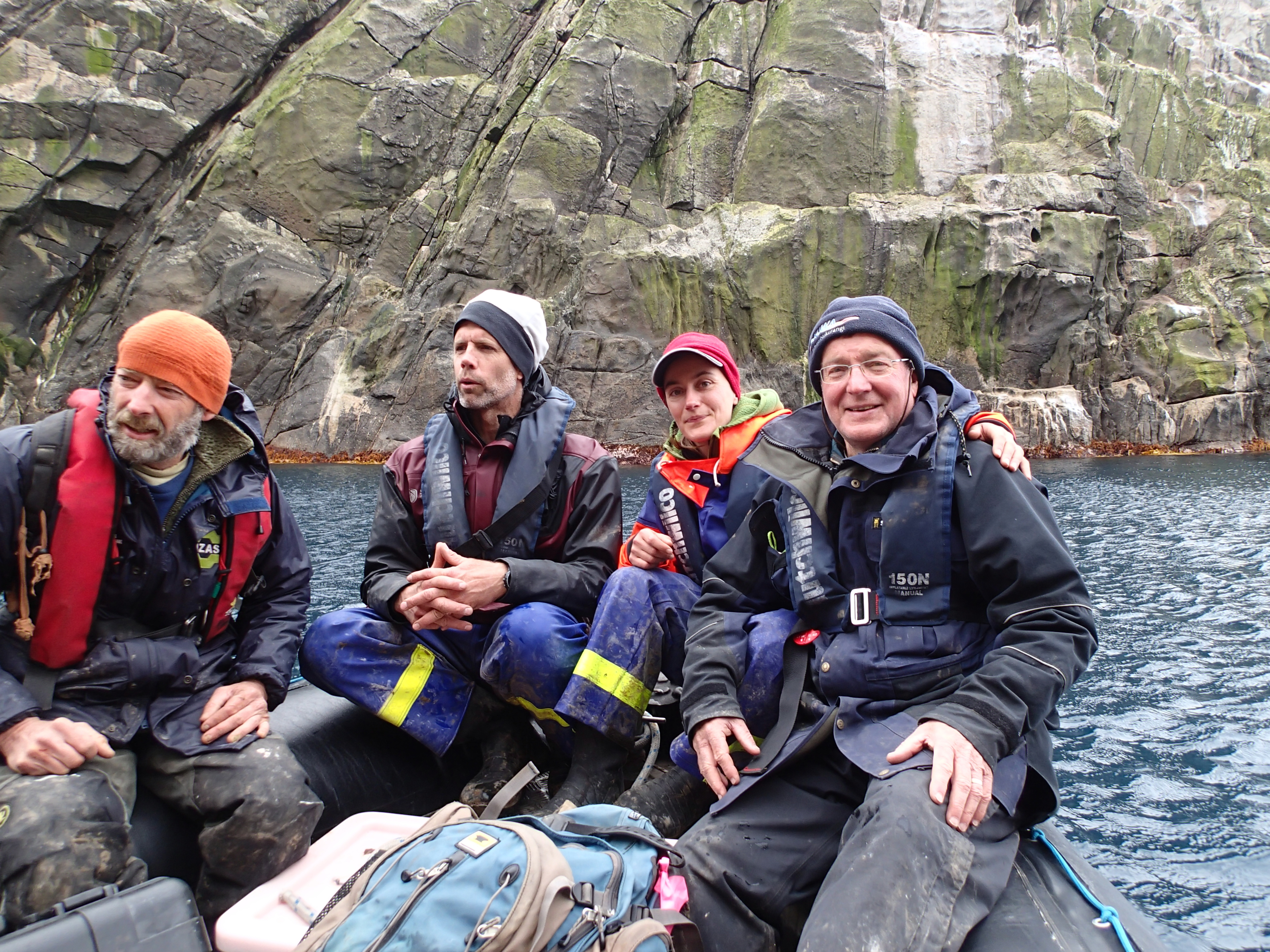 Preparing for our first trip to the Bounty Islands was different to any other island trip we’d prepared for.  The destination is particularly intimidating.  Lying some 670 km off the east coast of New Zealand’s South Island, the 13 unvegetated granite islands that make up the group comprise just 135 ha in total land area.  Sitting on the Bounty Plateau, the islands are surrounded by the Southern Ocean.  There is no safe haven once a vessel arrives at the Bounty Islands.  No sheltered anchorage where the yacht Evohe that was taking us there could hide away.  This is a crucial factor for workers wanting access to the islands to conduct research work on the Nationally Critical Salvin’s Albatross.

Proclamation Island in 2017, with Erect-crested Penguins and Salvin’s Albatrosses breeding on bare rock

The Bounty Islands are home to perhaps 30 000 - 40 000 breeding pairs of Salvin’s Albatrosses. That is by far the majority of the breeding population for the species, with just 1100-1200 pairs on the other breeding site, the Western Chain of the Snares Islands.  Salvin’s Albatrosses are frequently incidentally caught in New Zealand commercial fisheries, in other nations’ waters, and on the high seas.  Estimates are imprecise, but pretty scary: between 2002 and 2020 an estimated 4373 –-11 361 Salvin’s Albatrosses were killed in commercial trawl, and demersal and pelagic longline fisheries.  Most captures are in trawl, follow by demersal longline and then pelagic longline.  And that’s just the captures in New Zealand waters.

Fortunately for our first trip to the Bounty Islands we had the vastly experienced Paul Sagar with us.  We also had Matt Charteris on the team, another veteran of Southern Ocean albatross work.  Paul and Matt had both visited the islands previously and so their combined experience and knowledge were key to the success of our trip.  It takes two and a half to three days to reach the Bounty Islands by yacht.  To coincide with the incubation phase of the Salvin’s breeding cycle, our first trip was in October.  The austral spring is a time of swiftly changing weather in southern New Zealand, and frequent strong winds.  We knew we’d be in for some wild conditions, but we hoped to have enough weather windows to land on Proclamation Island and deploy satellite transmitter tags on breeding Salvin’s Albatrosses to better understand the birds’ movements relative to commercial fishing vessels in New Zealand’s Exclusive Economic Zone. We also planned to deploy GLS tracking tags and install cameras programmed to take hourly images, to better inform phenology for the species and provide some nest survival data.  Both GLS and cameras were retrieved in a follow up trip a year later. 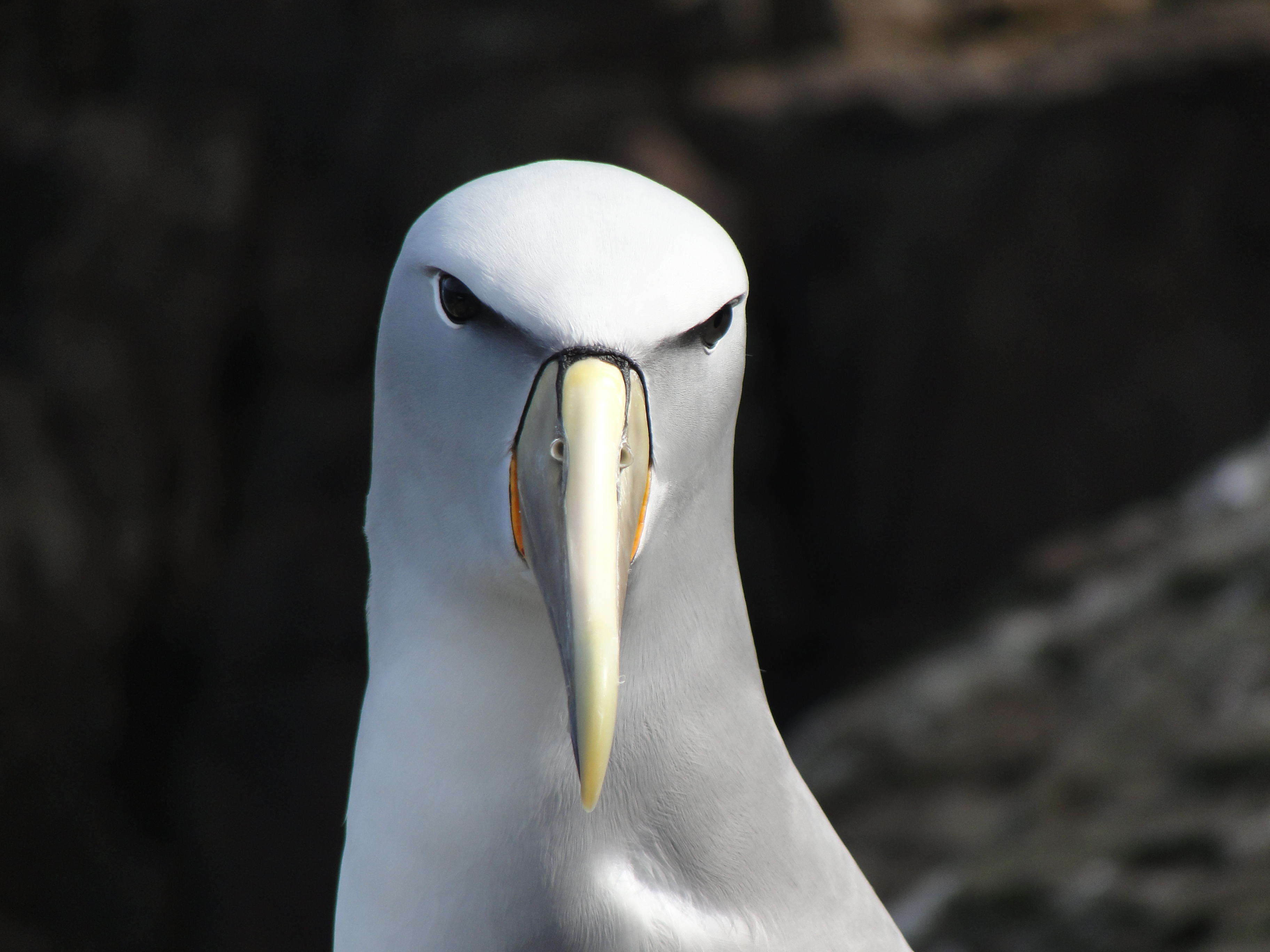 The Bounty Islands sit low in the ocean. The highest point of the highest island is just 73 metres above sea level.  Approaching on a yacht rolling in the ocean swells, a sensory welcome awaits.  Eager to see the specks of land, our vision is clouded with gliding Salvin’s Albatrosses in their thousands circling the granite rocks.  A cacophony of noise follows as the sound of albatrosses, Erect-crested Penguins Eudyptes sclateri and New Zealand Fur Seals Arctocephalus forsteri, and a few less-abundant bird species, noisily go about their day.  Once close enough, our air intakes are filled with the intense smell of jam-packed breeding colonies. The roar of oceanic swells crashing into the rocky islands dominates noisily as we get close enough to inspect the landing site and gauge if we can get ashore. 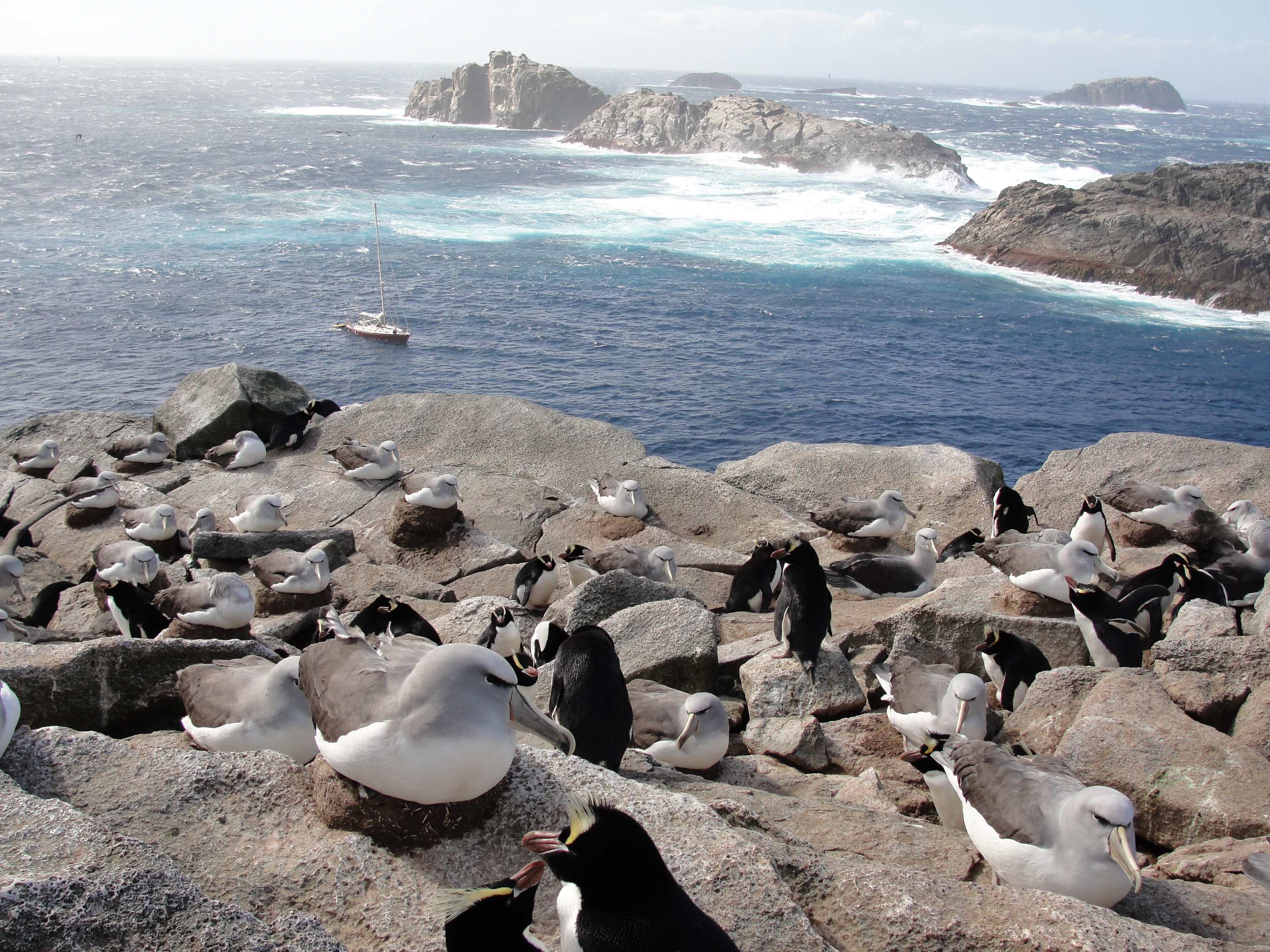 Albatrosses and penguins on Proclamation Island, with yacht Tiama keeping close by in 2015

Surging swells mean that the tricky part is getting from the yacht into a tender, and from the tender onto the kelp-covered rocks.  Once that is achieved, a welcoming party of fur seals awaits.  One of us must lead the group to gently persuade the fur seals out of our way, and to avoid causing a stampede of ‘furries’ madly colliding with the tightly packed Salvin’s Albatrosses and Erect-crested Penguins and crushing their eggs.  Matt embraced the role on our first trip, and we proceeded up the slippery rocks and a few tricky bits to climb with rope assist.  We felt like clumsy intruders, disturbing the established but delicate hierarchies of the island’s inhabitants.  Fur seal teeth and clappy-snappy bills are focused in our direction, but a corridor is allowed for us to access the top of Proclamation Island with minimal disturbance to the locals.  The cries of the breeding penguins are literally painful, and I prefer to use earplugs to ease the effect of their high pitched calls on my ears.  Normally a 360° view on an island is a hard-earned thing.  Not so on the Bounties, where ocean and sky are visible all around, enforcing the sense of isolation.

During the day a constant watch of the ocean conditions is maintained, and VHF radios are kept close to hear a ‘return to boat’ call from the vessel crew.  We land all the gear we need to camp on the island if we need to, but we really don’t want to have to resort to that.  Real estate is at a premium so any pitching of tents will involve shifting some unlucky residents.  The hard granite does not look a comfortable bed either, despite being more stable than our bunks back on the yacht. To minimise disturbance to the island we plan to return to the  Evohe after each workday.  On the days that there is too much swell to get on and off the island, we haul anchor, motor away to deeper water and sit with the vessel’s bow into the swell, waiting until the seas drop enough to return to the island. 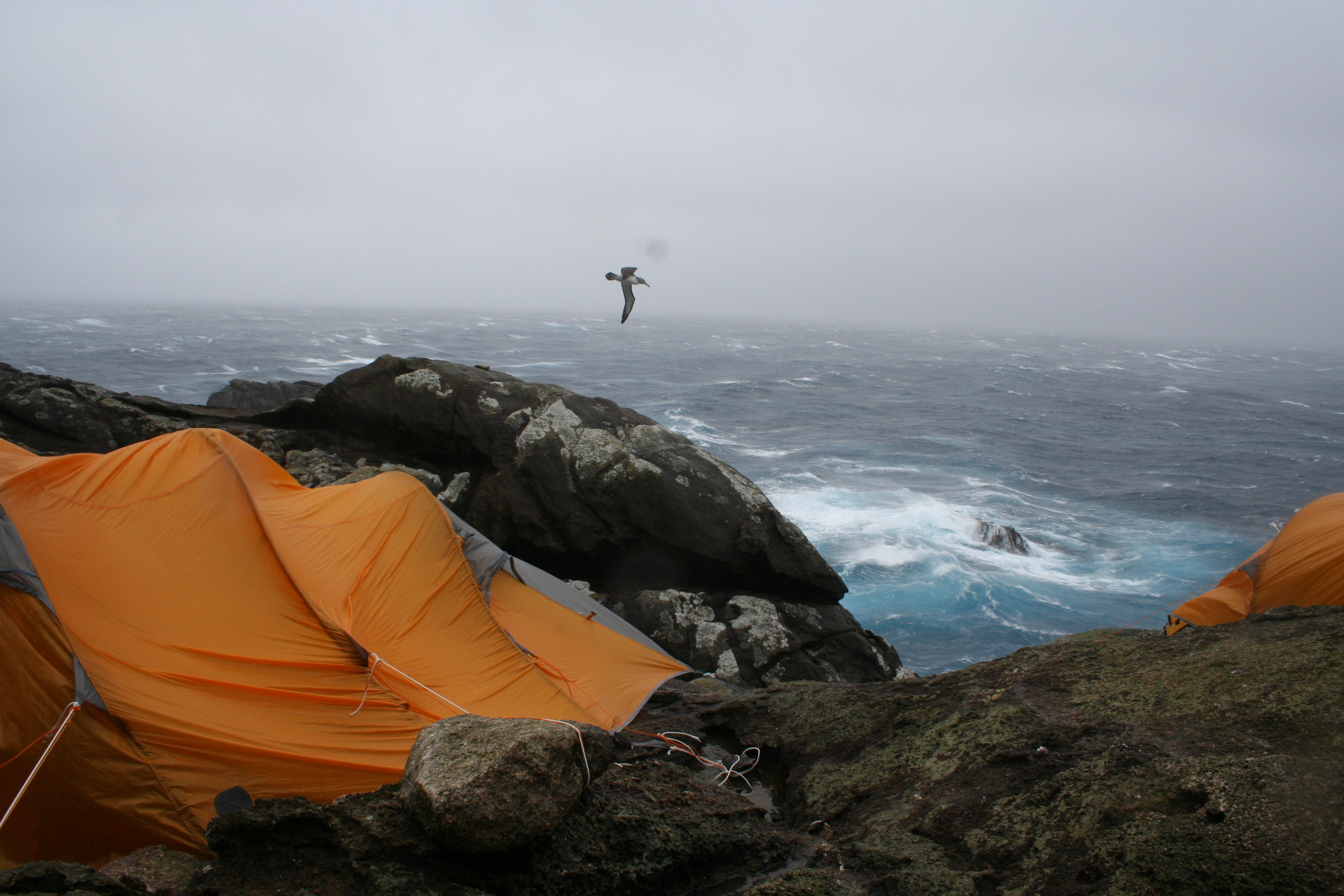 Rough seas, strong winds: camping on The Snares' Toru Islet is no picnic

On the first trip with Paul Sagar and Matt Charteris we successfully deployed GPS and GLS tags.  We returned a year later to recover the GLS and cameras and deploy further satellite tags.  In both years we conducted nest-inspection transects to confirm the proportion of apparent breeders that had eggs. These data can then be used to calibrate breeding population estimates derived from aerial images (by satellite, fixed wing plane or drone).

The Bounty Islands are a vitally important breeding site for Salvin’s Albatrosses. Visiting the islands is a massive privilege, and reinforces just how little we know about this species.  The scientific research that our trips conducted justifies disturbing the wildlife on those stunning islands, and future visits must be similarly justified. 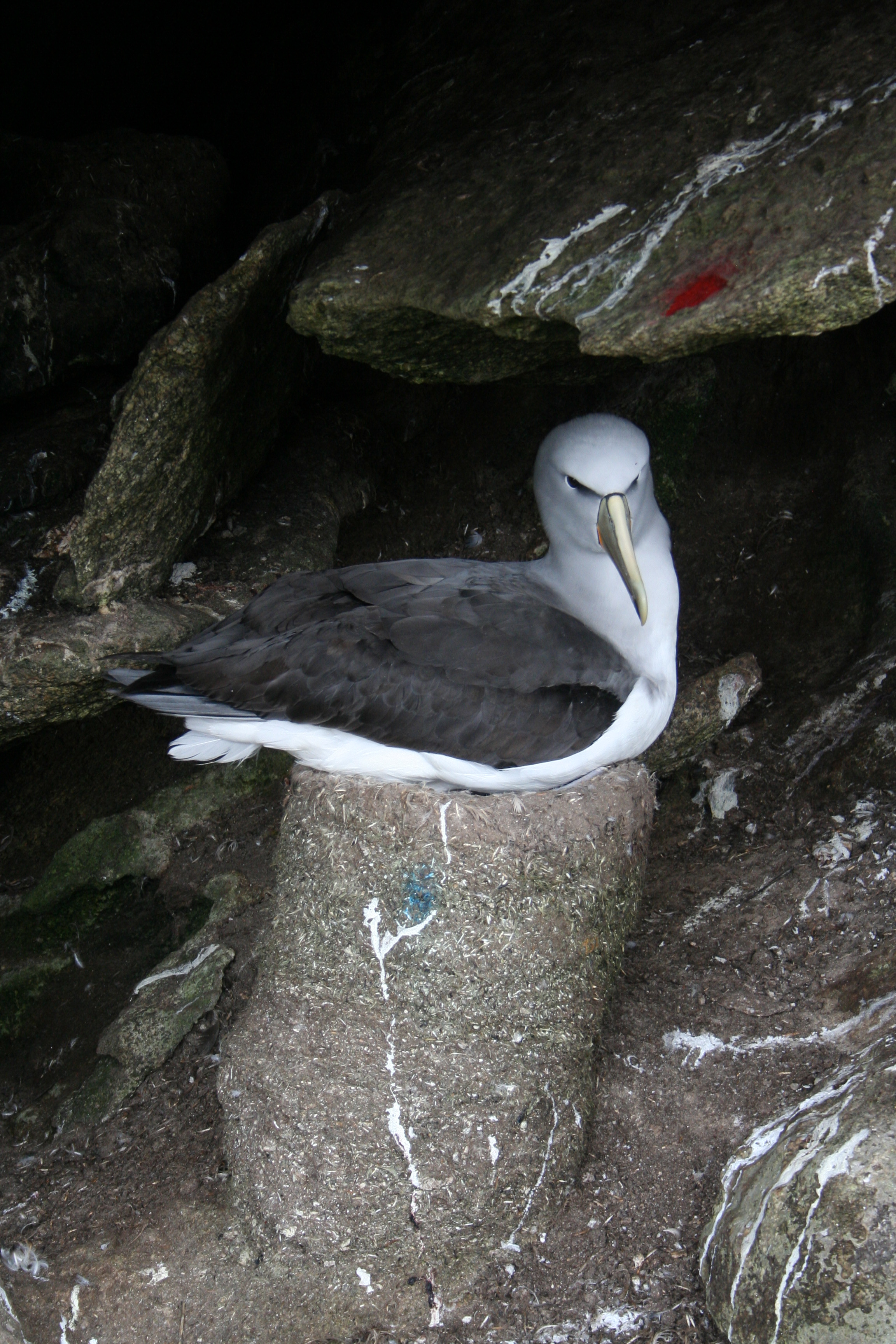 Protected in a cave on the Snares’ Western Chain, nests used for repeated seasons can grow exceptionally tall; all photographs by Matt Charteris

“I worked with Salvin’s Albatrosses on Toru and Rima Islets in the Western Chain of the Snares Islands and on Proclamation Island in the Bounty Islands over the period 2008 to 2018.  In 2018, Graham Parker and Kalinka Rexer-Huber of Parker Conservation joined the team and have continued the fieldwork programme.  It is a team that makes this work successful and safe.  Landings are difficult and opportunistic. Camping is awkward.  Support of the yachts and their skippers, the weather reader at the Roaring Forties Meteorological Service and Maritime Radio allowed the data gathering to happen.  Great to be involved!”