Featuring ACAP-listed species and their photographers: the Amsterdam Albatross by Jean-Paul Roux with Jérémy Dechartre 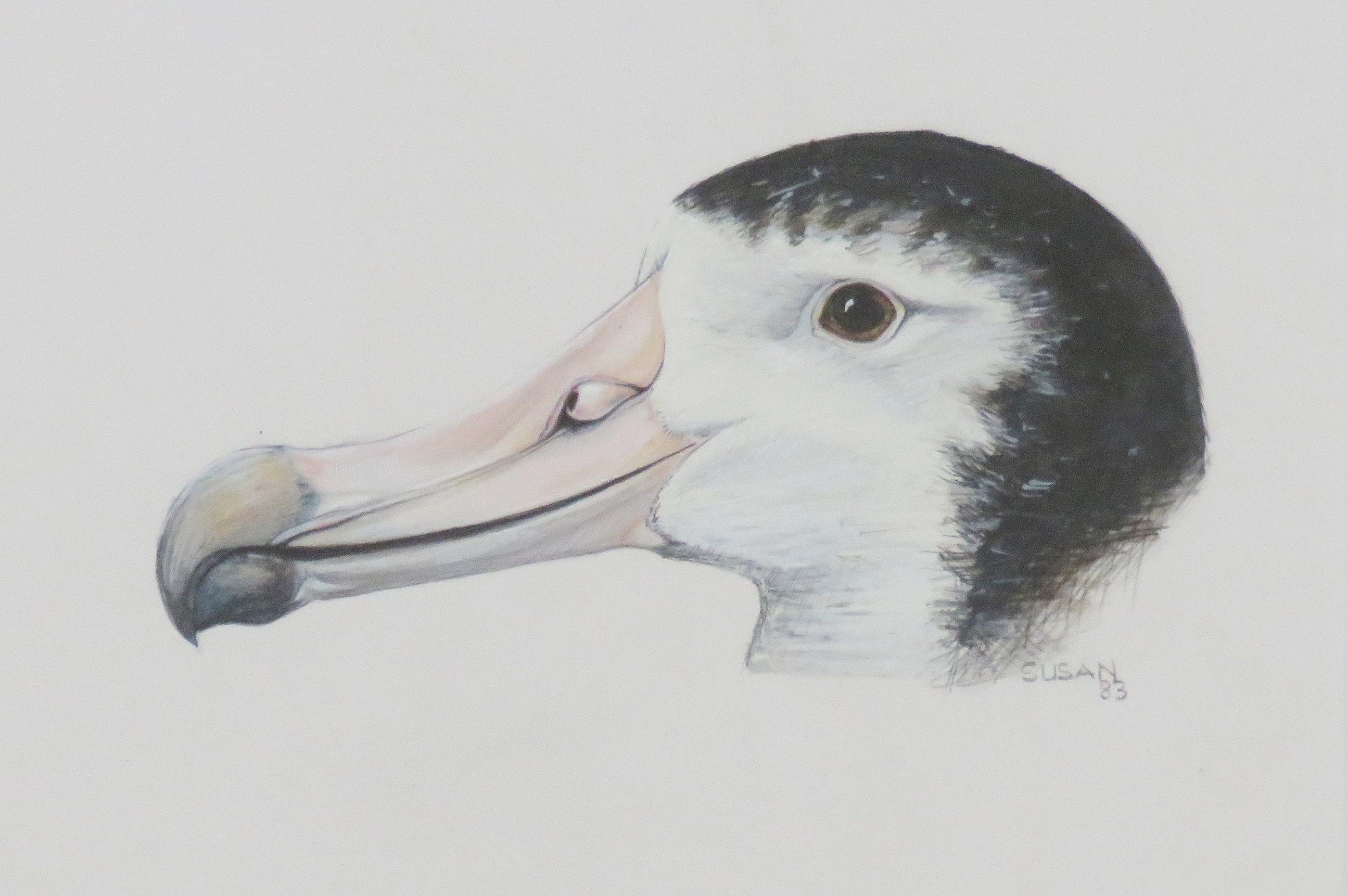 Painting of the first Amsterdam Albatross photographed by the author, by Susan Roux

NOTE: This post continues an occasional series that features photographs of the 31 ACAP-listed species, along with information from and about their photographers.  Here, Jean-Paul Roux writes about the Endangered Amsterdam Albatross Diomedea amsterdamensis he first identified and described as a new species in the 1980s.  His account is illustrated with photographs taken by Jérémy Dechartre because Jean-Paul no longer has easy access to his own photos stored on another continent.  Jérémy  was the ornithologist and marine mammologist from the Centre d'Etudes Biologiques de Chizé (coordinated and supported by the Institut Polaire Français Paul-Emile Victor) with the 70th Mission to Amsterdam Island in 2019 with the project “Birds and Marine Mammals, Sentinels of Global Changes in the Southern Ocean”. 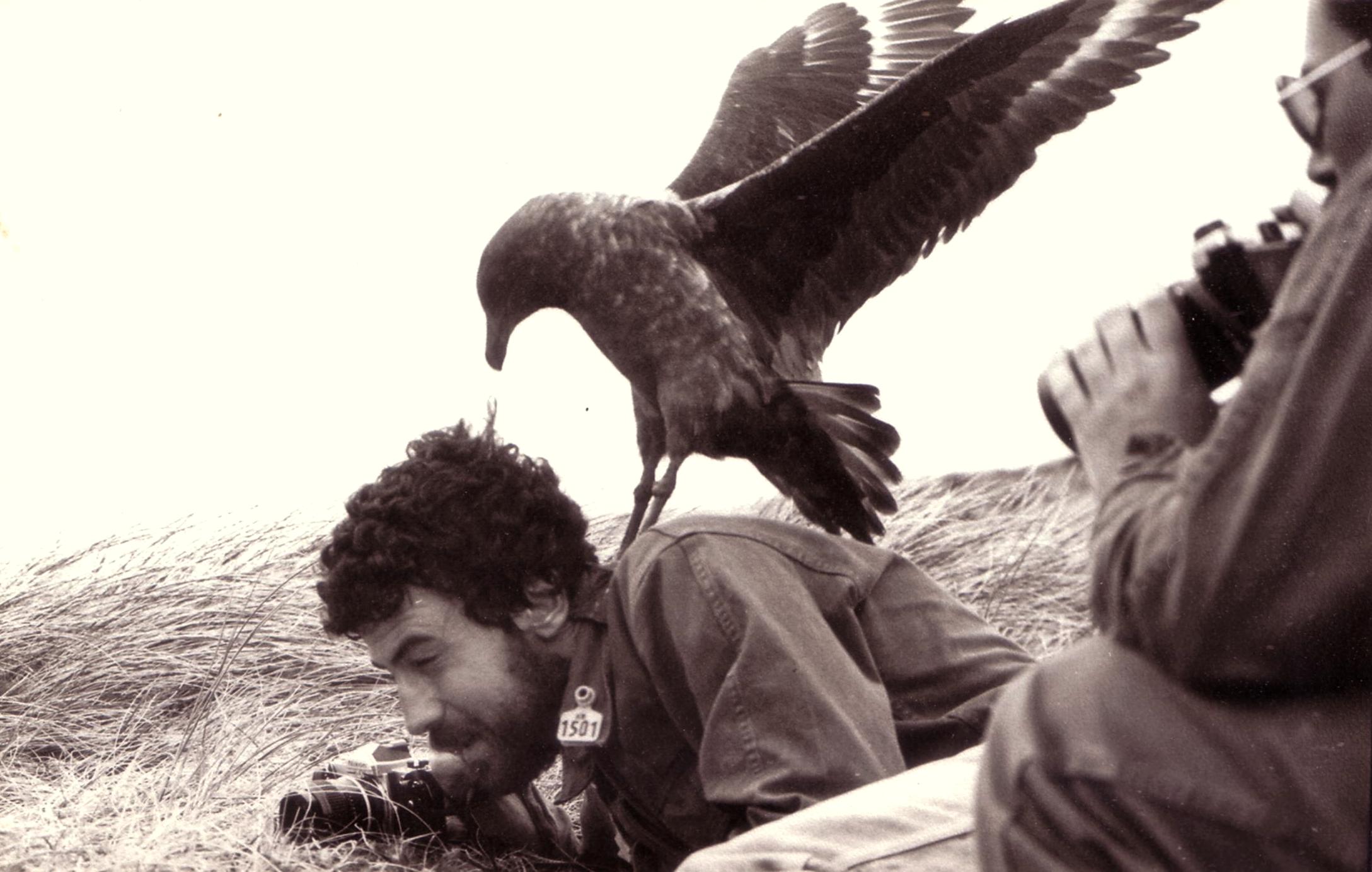 Jean-Paul Roux on Amsterdam Island in 1981 (with a friend)

Amsterdam Island is a small (less than 7 x 10 km) volcanic island situated in the centre of the southern Indian Ocean 4500 km from southern Africa, 3200 km from western Australia and 3200 km from Antarctica; making it one of the most isolated islands in the world.  Despite this remoteness it was discovered extremely early in the age of southern exploration, being sighted by the Spanish Elcano in March 1522 during the first circumnavigation of the world (the Magellan Expedition).  Subsequently the Dutch van Diemen named the island after his ship the Nieuw Amsterdam in 1633; the first recorded landing was made in 1696.  During the 18th and 19th centuries the island was frequently visited by sealers who nearly exterminated the local population of the Sub-Antarctic Fur Seal Arctocephalus tropicalis.  These were followed by regular visits of fishing vessels (particularly from the island of Réunion).  At least seven vessels have been wrecked along the island shore. 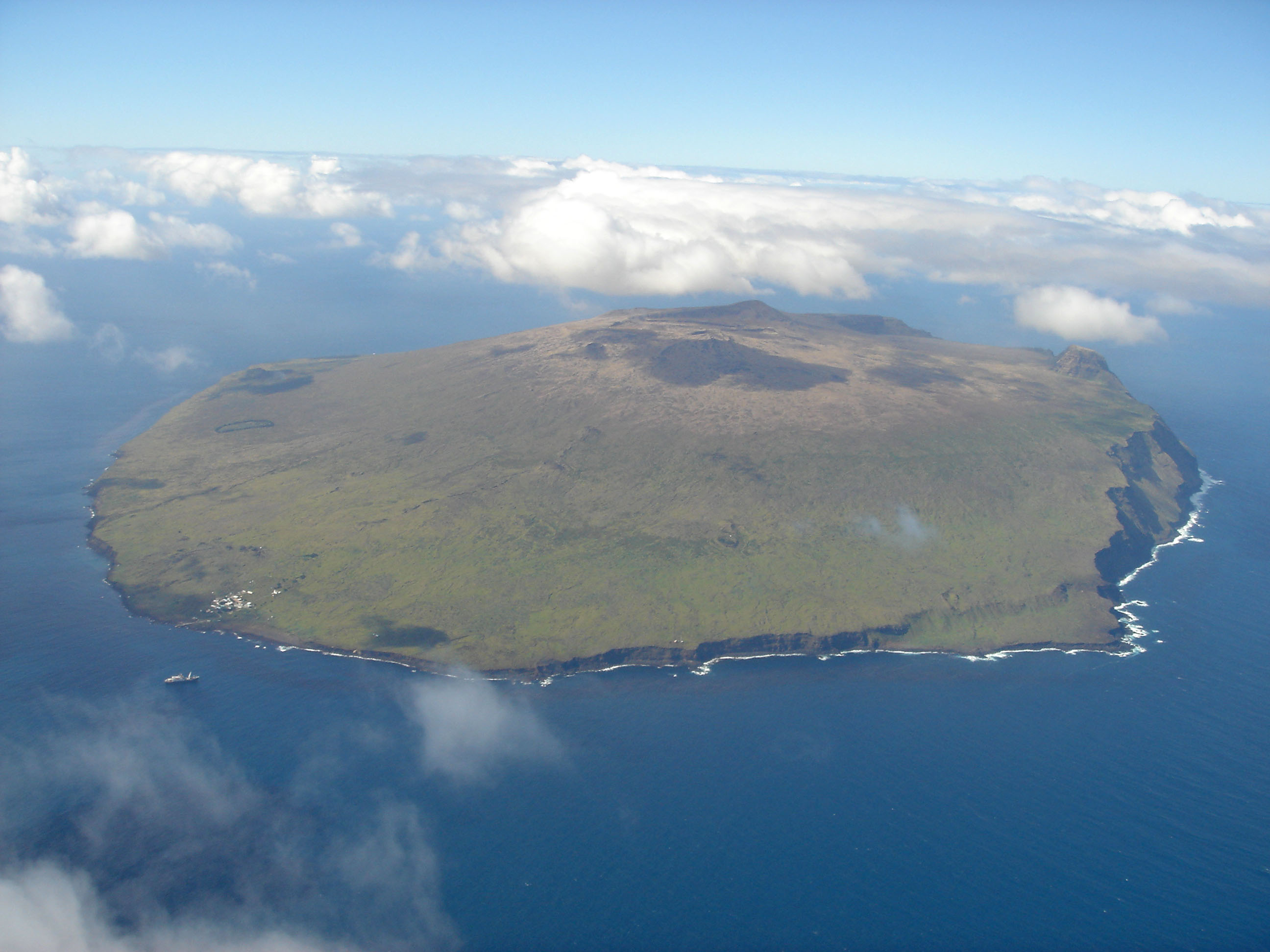 Amsterdam Island from the air, Photograph by Thierry Micol

These early visits had a devastating effect on the fauna and flora of the island through direct depredation by humans, introductions of predators (cats, rats and mice) as well as several large fires which destroyed the original forest of Phylica arborea which covered most of the slopes of the island.  A failed attempt at settlement in 1871 left behind more introduced animals (including cattle) and plants which contributed to the severe environmental degradation of the island and the extinction of several species of seabirds (some probably endemic) and the only known terrestrial bird (an endemic flightless duck).

The island was claimed by France in 1843 and, as a permanent settlement was required by international law to maintain this territorial claim,  a permanent station, Martin-de-Viviès, was built in 1949 for meteorological observations and radio communication in the middle of the Indian Ocean.  When France initiated in the 1950s biological and ecological research programmes in the region the focus and priorities were on higher latitude and less degraded archipelagos (Kerguelen Islands and Crozet Islands). As a result of this neglect the ecology and avifauna of Amsterdam Island remained poorly documented until the 1980s. 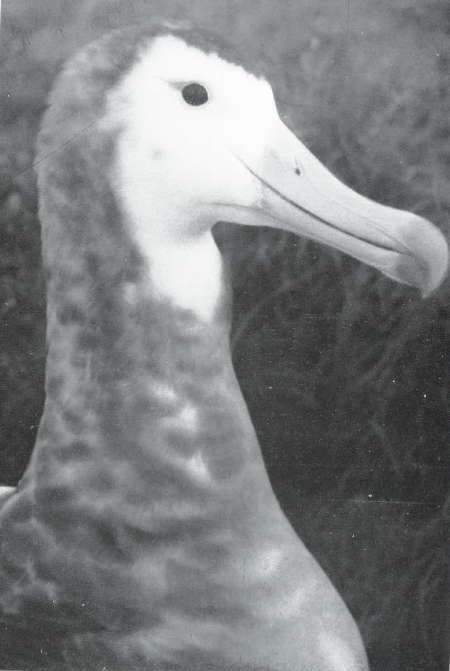 One of the early biologists of that era was Patrice Paulian who, at the end of a research mission on Kerguelen in 1951, had a short stop-over at Amsterdam during which he tried to document the avifauna of the island.  He heard from the station personnel of very few “great albatrosses” nesting on the high Plateau des Tourbières but failed to see them.  The following year he received a black and white photograph of a breeding adult on an egg taken by non-scientific personnel of the station on 6 April 1951 which he published in 1953, with the comment [in translation] “Diomedea exulans ssp? … in the absence of any material… we can only affirm the presence at Amsterdam Island of a brown sub-species clearly different from the birds of Kerguelen”.

Unfortunately, Paulian had only access to this photograph and mistook the dark cutting edge of the bill for a shadow caused by what he thought was possibly a partially open bill.  He later returned to Amsterdam Island for a summer and produced a seminal work on the Sub-Antarctic Fur Seal, but again never managed to see an adult great albatross (because their breeding season is later than for the Kerguelen birds he knew).  As a great naturalist that he proved to be, I am convinced that, if he had had the opportunity to see a breeding adult, he would have recognized the uniqueness of these birds.

During the following two decades, no trained ornithologist had spent more than a couple of days on Amsterdam Island.  After my first sub-Antarctic experience at the Crozets (late 1979 to early 1981), I was given the opportunity to visit Amsterdam Island for a “summer mission” (September 1981-March 1982), focusing on fur seal biology and Indian Yellow-nosed Albatrosses Thalassarche carteri.  During this time, I also documented the avifauna and the ecologically degraded state of the island.  As regularly as possible I visited the site of the Amsterdam Albatross breeding area on the floor of the remnant of an ancient caldera at an altitude between 500 and 600 m.  During those early visits, guided by some island station personnel, we located eight chicks that we banded, but I did not manage to observe an attending adult.  My first impression was that the chicks seemed at least two months behind in terms of development compared with the Wandering Albatrosses D. exulans I had observed on the Crozet Islands in the previous two seasons. These birds fledged in late December and January.  Finally, in early 1982 I had my first sighting of an adult feeding a pre-fledgling chick. The differences in plumage and the bill colouration were immediately strikingly different from the southern great albatrosses I knew.  I intensified the frequency of my visits to this seldom-visited area of the island until I documented photographically a pair displaying with a half-built nest leading, a week later in early March, to a first incubating bird.  The inferred laying date was more than a month later than all the documented laying dates for the Wandering Albatross

A pair of Amsterdam Albatrosses interact

With these preliminary observations, my return to mainland France was met with mixed reactions.  Whereas some colleagues were supportive, others were less so.  After more than a year gathering more information, measurements and observations from previous and current personnel at Amsterdam Island, I had accumulated enough evidence to propose a new species for this extremely rare albatross, with a first estimate being as low as 50 birds!  However, this idea was not accepted at the Museum national d’Histoire Naturelle (MNHN) in Paris on the grounds that it was not possible to describe a new species without at least a specimen (holotype).  After many visits to natural history museums around the world holding albatross specimens collected over the last two centuries from the central Indian Ocean with the help of friends and colleagues we still had no physical specimen.   Someone made the suggestion that to make a species proposal I should “sacrifice” at least one breeding adult, but preferably two (a male and a female) when initial estimates pointed to a population of only 13 breeding pairs between 1978 and 1983.

In March 1982 an adult was found dead on the plateau where the birds were breeding.  Due to the poor state of the remains only the head and one wing could be preserved and shipped back to mainland France, arriving late in the year.  These remains were deemed acceptable as a holotype for the proposal of a new species, resulting in publishing this “description” in a French-language publication (L’Oiseau et R.F.O, now defunct). This had the consequence of limiting the readership and impact of the discovery.  However, despite this the news spread throughout the seabird world.  Peter Harrison included the new species in the first revision of his seminal Seabirds and Identification Guide as early as 1985.

My first proposal was to name the new species as Diomedea pauliani in honour of Patrice Paulian and his early insight and for publishing the first photograph of Amsterdam’s great albatross, but in the end it became Diomedea amsterdamensis.

Subsequently, a long-term monitoring programme was set up for the Endangered Amsterdam Albatross, which then led to the production of a species action plan and efforts to rehabilitate the island’s ecology.  The feral cattle which had contributed to vegetation degradation and soil erosion and were occupying more than 70% of the island area, were eventually limited to a smaller area by fences and then eliminated by 2010 (click here).