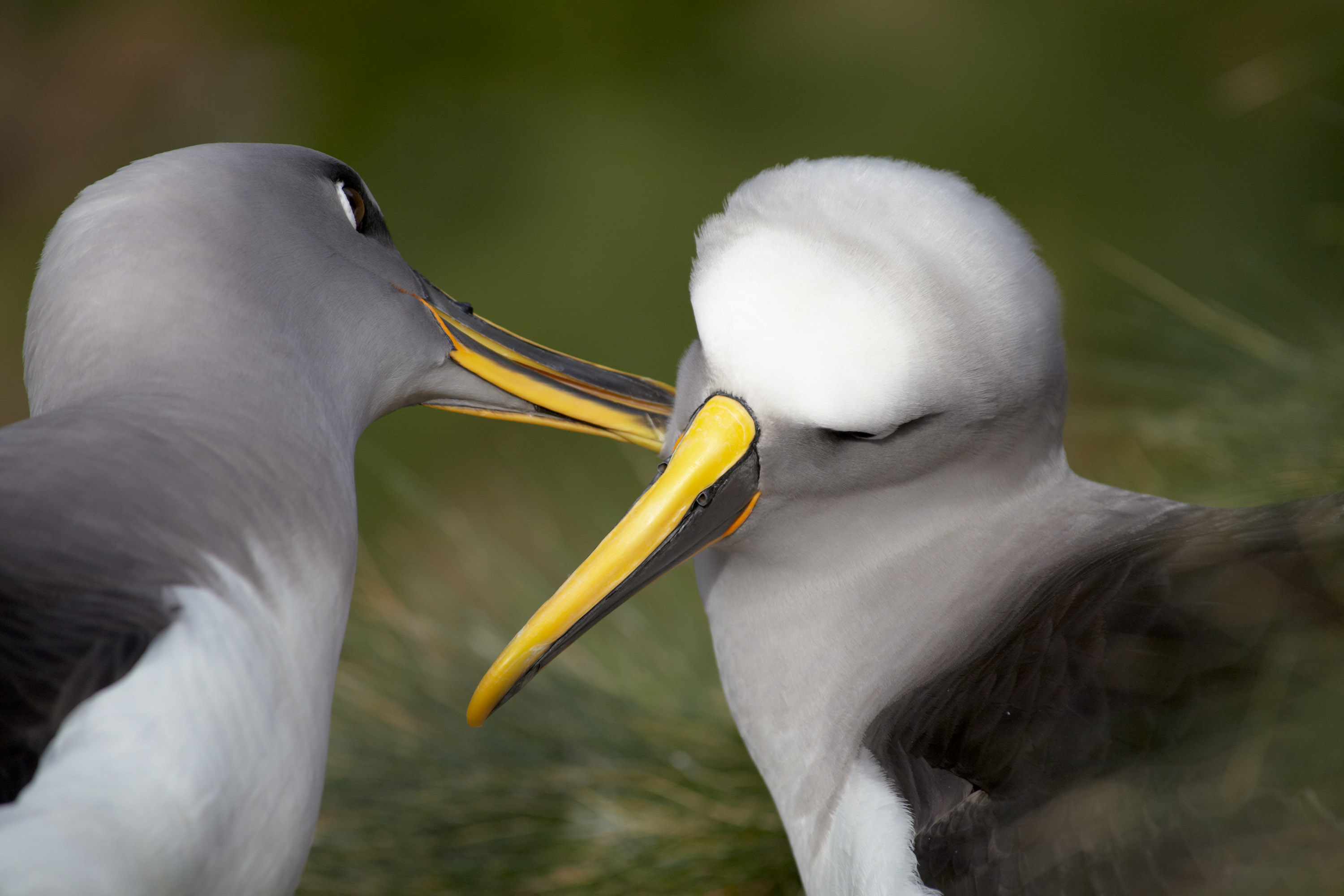 A pair of non-breeding Buller’s Albatrosses preen on Solander Island, the female (left) devoting all her attention to a rather contented-looking male, May 2013

NOTE: This post continues an occasional series that features photographs of the 31 ACAP-listed species, along with information from and about their photographers.  Here, Jean-Claude Stahl writes on the globally Near Threatened Buller’s Albatross Thalassarche bulleri that he has studied and photographed over many years. 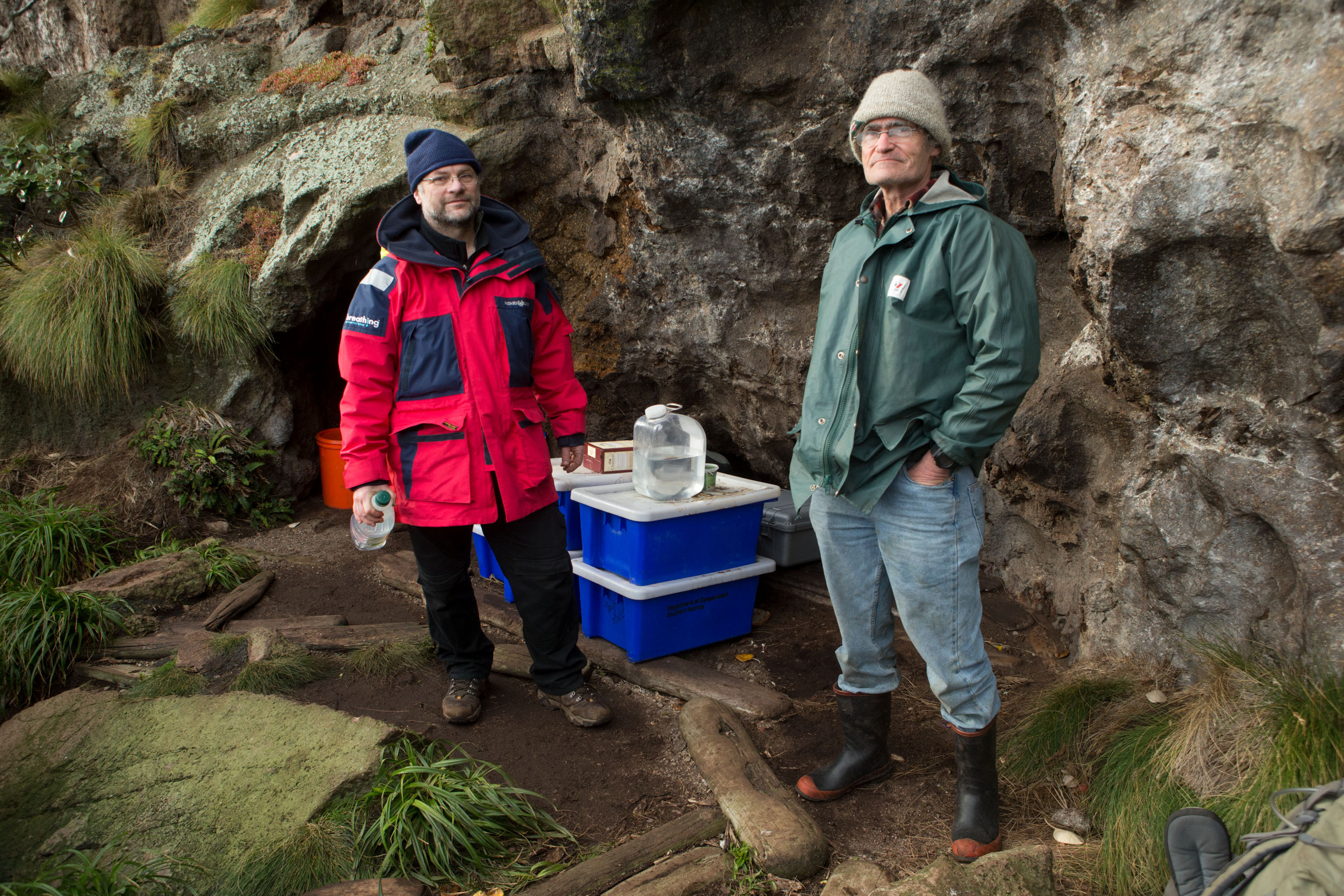 Realistically, I have the French military service to thank for my involvement in albatross research.  My choice back in 1977 was between mud crawling on mock battlefields, or a civilian option to study King Penguins Aptenodytes patagonicus on the sub-Antarctic Crozet Islands.  I chose the latter after a nanosecond hesitation, unaware then that the penguin option would have its fair share of mud crawling.  Begging for more, I returned to the Crozets for two more seasons, with research undertaken on a community of 16 petrel species on East Island with Pierre Jouventin, Jean-Louis Mougin and Henri Weimerskirch.  We also undertook the first surveys of Penguin and Apostle Islands where we discovered new breeding localities of Indian Yellow-nosed Albatrosses T. carteri.

While roaming the penguin beaches on the main Possession Island (Île de la Possession), I got the attention of a rather exotic (to French eyes) visiting bird curator from the Museum of New Zealand, Sandy Bartle.  He invited me to his home country and museum; I went there “for a year” in 1986 and I still live in New Zealand.  I soon got involved in seabird research, briefly on the Auckland Islands with Graham Elliott and Kath Walker and more in-depth on Southern Buller’s Albatrosses T. b. bulleri with programme leader Paul Sagar of the National Institute of Water and Atmospheric Research (NIWA), with whom I have enjoyed working for many years.  The research programme was prompted by worries about interactions with fisheries when little was then known about the bird’s at-sea distribution. 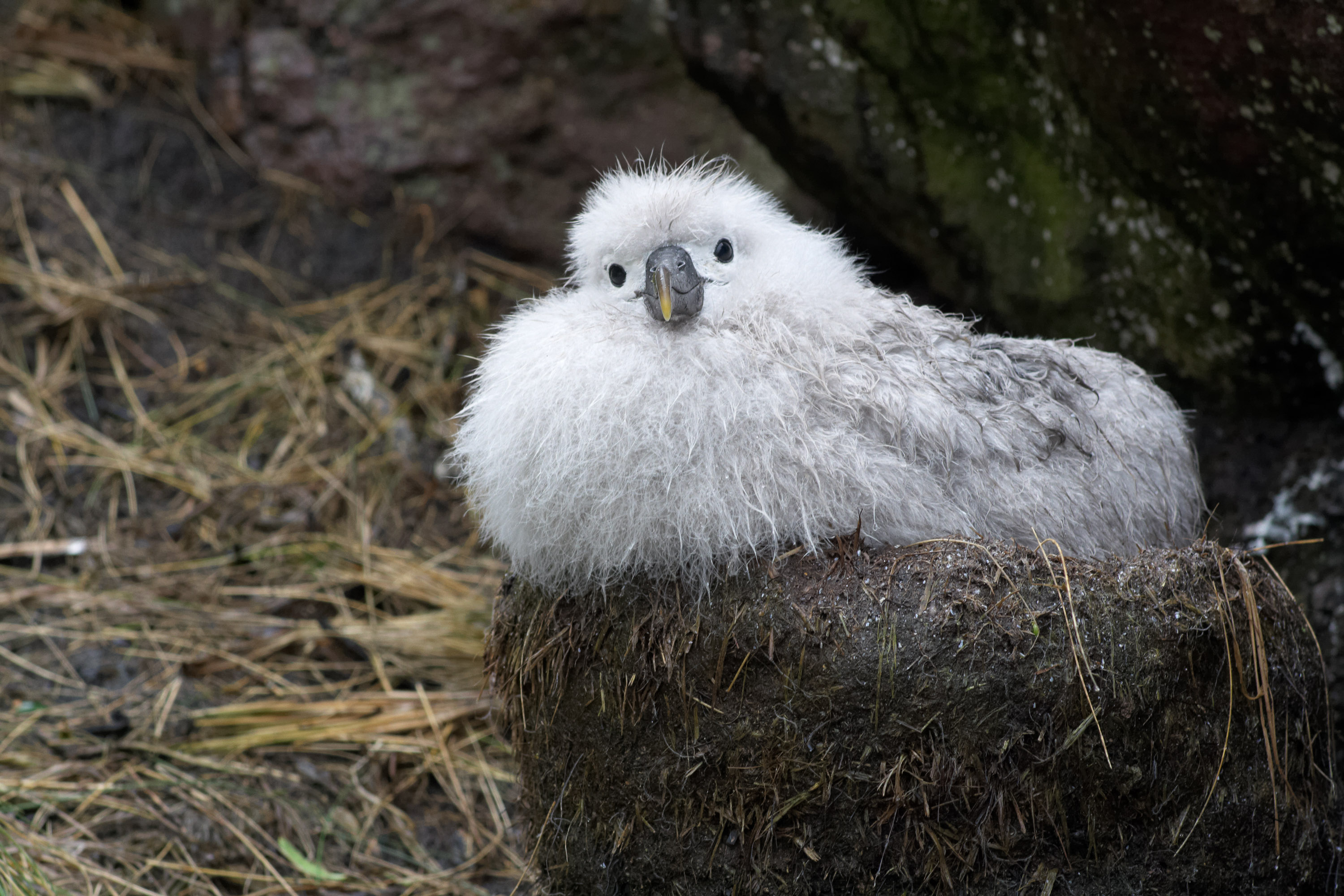 A two and half month-old Buller’s Albatross chick 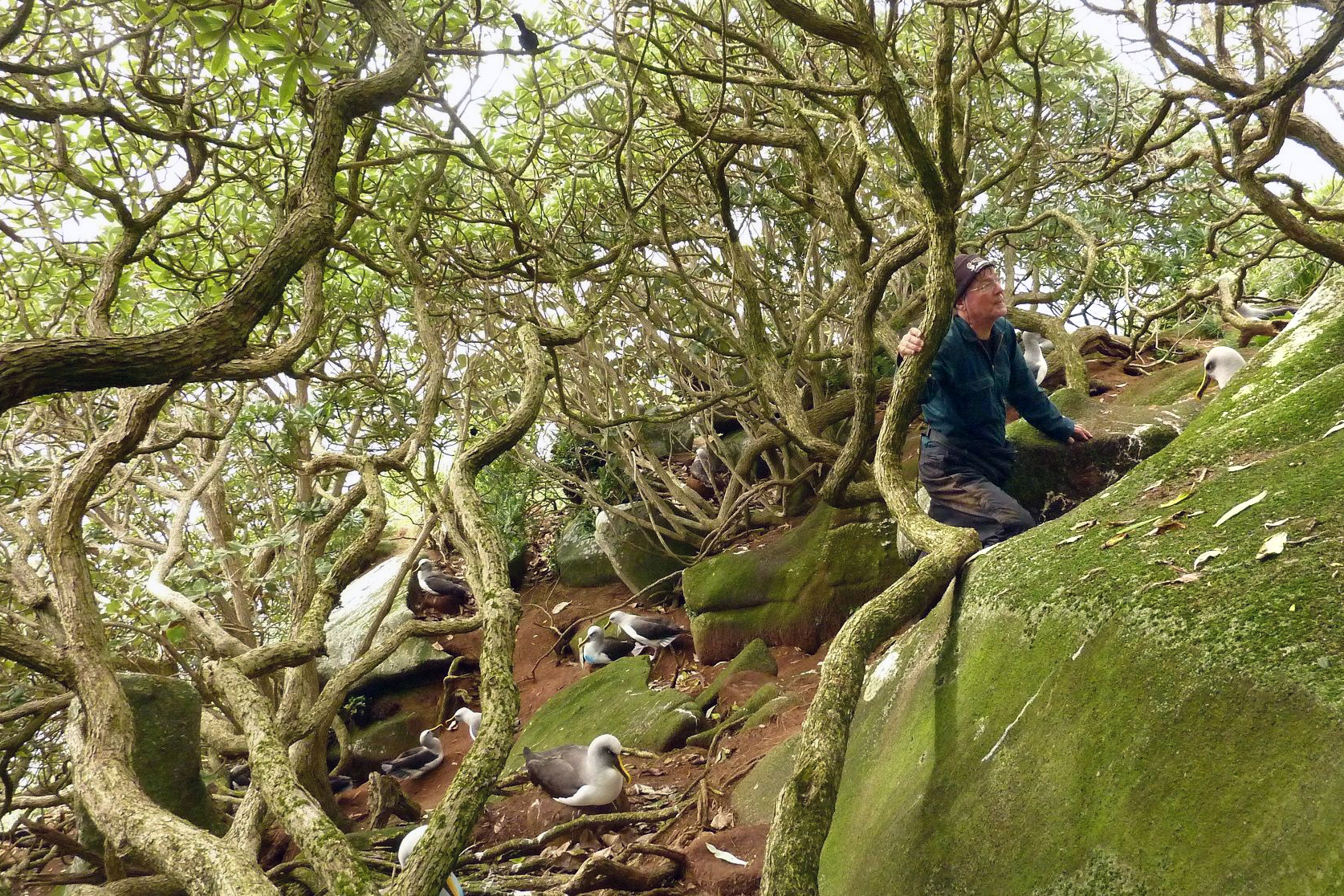 During our shared stint of research, Paul Sagar concentrated on demography and the Snares some 100 km south of Stewart Island, complete with a cosy hut.  My focus was on the telemetry of foraging birds, and on a study colony on the Solander Islands, which the New Zealand Department of Conservation wishes to keep a wilderness (so no hut, although I sympathise with the policy).  Solander (1.6 km long, 33 m high) is the largest eroded remnant of an andesitic volcano, a bleak landmark some 40 km south of the Fiordland coast and 60 west of Stewart Island.  Hautere, the Māori name of the island, means “swift winds”, a rather apt description for an outpost close to the windiest weather station in New Zealand at South-west Cape.  Europeans first sighted the island in 1770, when Captain James Cook named them after Daniel Solander, the Swedish naturalist on Cook’s first voyage.  As did many southern islands, Solander had its share of sealing gangs and castaways, with one gang of five stranded there between 1808 and 1813, presumably plenty of time to hone their Buller’s Albatross recipes.  Solander is partly covered by “muttonbird scrub” Brachyglottis rotundifolia and Veronica elliptica scrub, below or adjacent to wind-blasted slopes of Poa foliosa and P. astonii tussock and a taller forest patch of Subantarctic Tree Daisies Olearia lyallii on the summit plateau and Brachyglottis stewartiae, more widespread and down to sea level on the Snares. 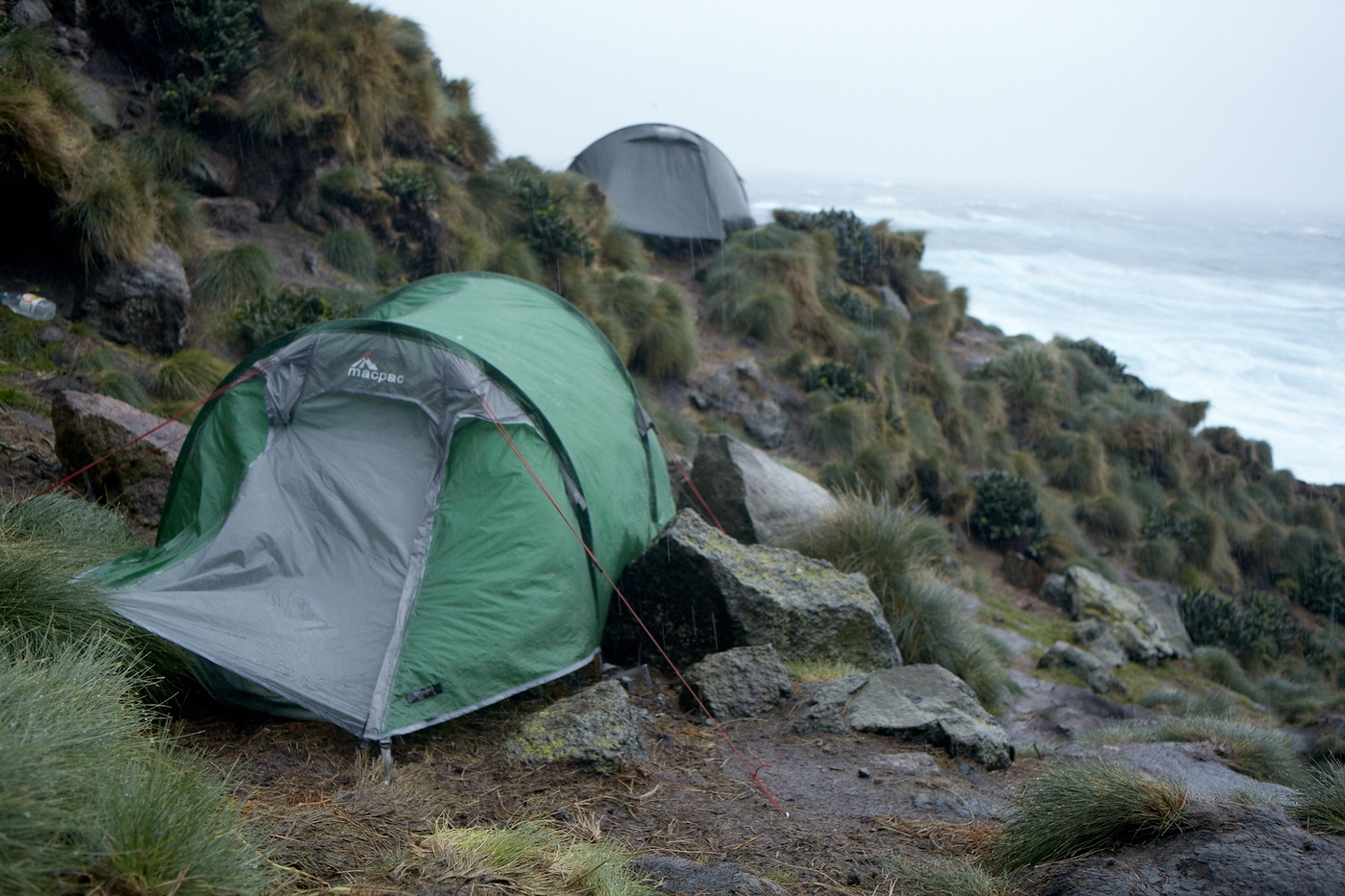 The safest if horizontally challenged camping spot on Solander

Access to Solander is by permit only and after strict quarantine procedures by the Department of Conservation.  A helicopter can only land on the boulder beaches at low tide, and the first time we were left stranded was an eerie experience in misty weather, surrounded by fish bins of food and gear and hundreds of New Zealand Fur Seals Arctocephalus forsteri and desperately looking for a camping spot on the side of a pyramid.  Over time, we sampled various “promising” spots that turned out to be a waterfall base, a gravity-assisted boulder field, a seal haulout and a Weka Gallirallus australis playground, all accompanied by the deafening heavy swell.  Wekas (a flightless rail) were presumably introduced by sealers and have seriously depleted the burrowing petrel populations but seem to have little affected the Buller’s Albatrosses. 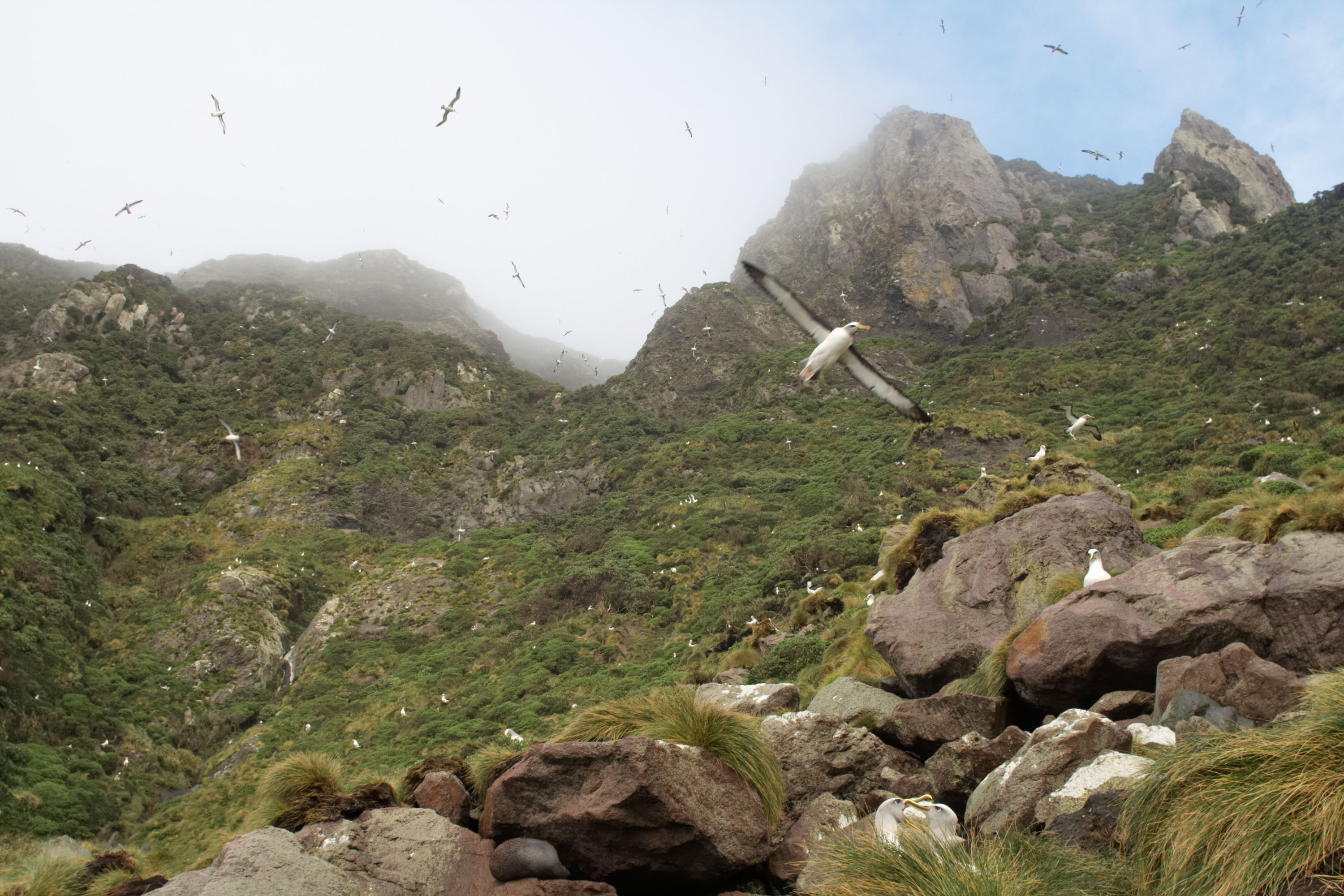 Apart from the storms, the greatest spectacle on the Solander Islands was the synchronised return of non-breeding Buller’s Albatrosses to their prospective colonies - I had become particularly interested in non-breeders, which account for close to half of the birds coming ashore.  This was most spectacular in summer during incubation when flocks of over a thousand birds started wheeling off the cliffs at dawn before returning ashore and literally awakening the place (and us) with their piercing wails.  The by-then presumably exhausted birds trickled out to sea in mid-morning to form large rafts just offshore, with an eerie silence returning to the colonies of snoozing incubators.  In mid-afternoon, whole squadrons of non-breeders returned ashore, and all wailing hell broke loose once again, bodies circling each other, heads bobbing, tails fanning, fights and all, until the final dusk exodus.  Except at full moon, when the racket went on well into the night. 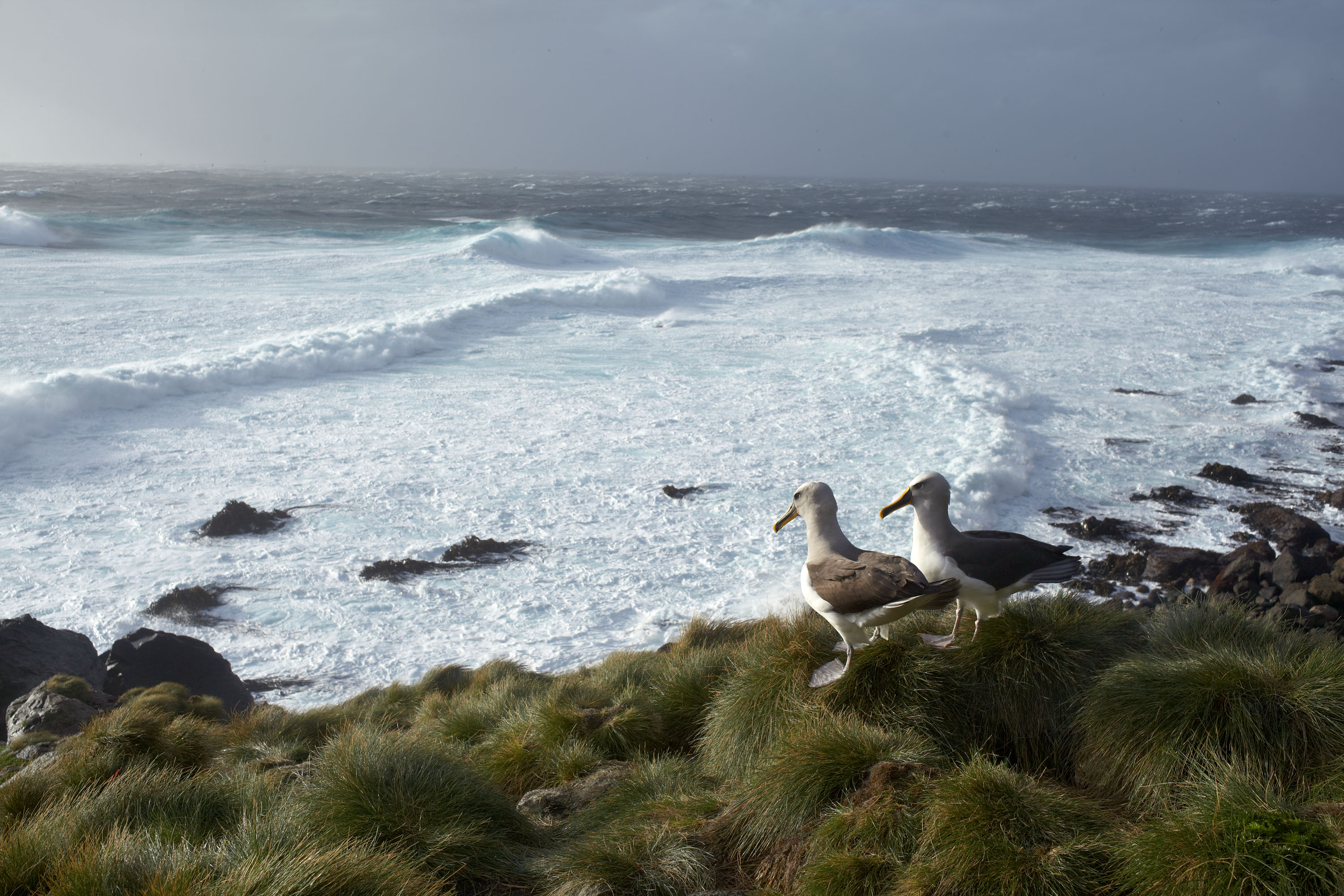 Speaking of storms, one truly epic day was when collecting diet samples from chicks in the teeth of a massive winter storm in July.  In between sheets of sea spray ascending right past the top of the island, we fought our best to “stabilize” the collecting bucket bobbing frantically in the wind. During a relative lull, the knack was to get the near vomiting chick’s bill somehow aligned with the bucket before “release”.  Needless to say a few samples shot past the rim of the bucket on their way to outer space. 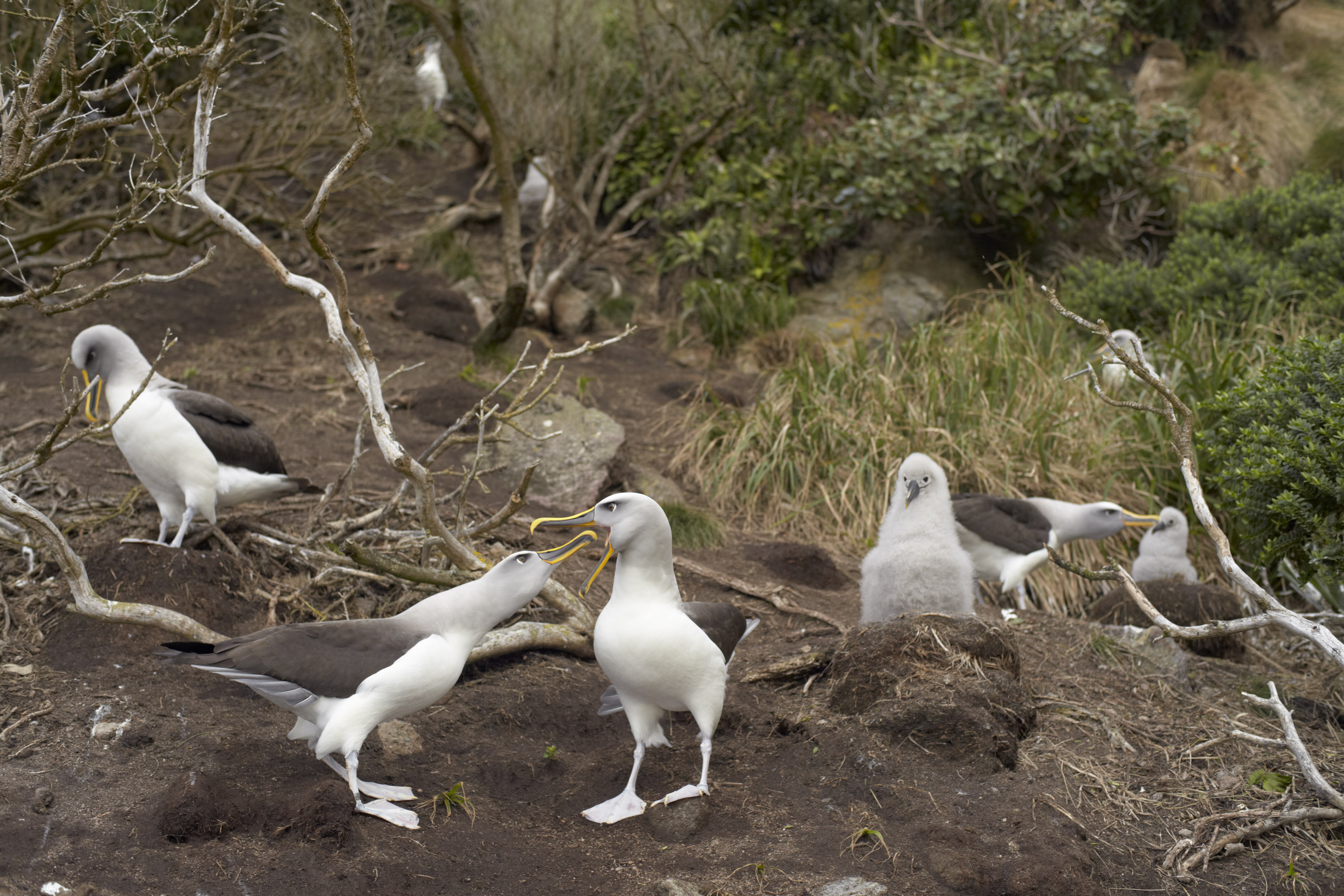 Non-breeding birds displaying, attending nests and preening chicks in a study colony on Solander in May 2013

All in all, I made 11 trips to Solander (three-week trips in February and two-week trips in May and July), as well as eight trips to the Snares.  In the compact Solander study colony, I came to know quite a few birds personally; the placid incubators hardly moving when their bands were checked, the neurotic ones on the verge of nervous breakdowns.  I got particularly fond of a banded non-breeder, although getting close to it would be an overstatement.  From the top of his house-sized rock perch, this particular male kept a near daily watch on my wanderings in the colony - and presumably on passing Buller’s females.  I tried everything: slithering around the rock, whistling in mock disinterest, sprinting to beat the odds.  The cool bird just slid off its perch in a nonchalant glide, returning within sometimes seconds of me giving up the chase (French expletives omitted here).

Telemetry of breeding and non-breeding birds from the Snares and Solanders has revealed a dynamic stage, sex, age and locality dependant pattern which, on present evidence, seems broadly consistent from year to year.  Breeding Southern Buller’s Albatrosses forage up to 1800 km from their colonies, from Tasmania in the west to the Chatham Rise east of New Zealand, and from the Auckland Islands north to the Cook Strait (usually) or top the northern tip of New Zealand (one bird).  Breeders of both sexes undertake mostly long trips during the incubation period, mostly short trips during the brood-guard stage, and a mix of short and long trips during the post-guard stage to mid-June (males, which revert to short trips later in the season) or late July at least (females).  The mid-June change coincides with the dispersal of White-capped Albatrosses T. steadi, although this may not indicate a causal relationship.  Males undertake more short trips than do females, and, during long trips, disperse less far along the New Zealand slope.  When heading into the Tasman Sea they forage over the Tasmanian slope, whereas females stay in the oceanic mid-Tasman.  Females also mostly forage in the mid-Tasman during the pre-laying period, when males undertake mostly short trips. Compared to Snares breeders, Solander breeders, especially females, disperse more frequently to the slope west of New Zealand, both during long and short trips.  Tracked six-to-seven year-old prebreeders dispersed to a staging area off Tasmania after their only documented visit ashore.  Older prebreeders (aged eight to nine years) either made mostly long trips to the same areas as breeders (Tasman Sea and New Zealand slope), or mostly undertook short trips throughout the season. 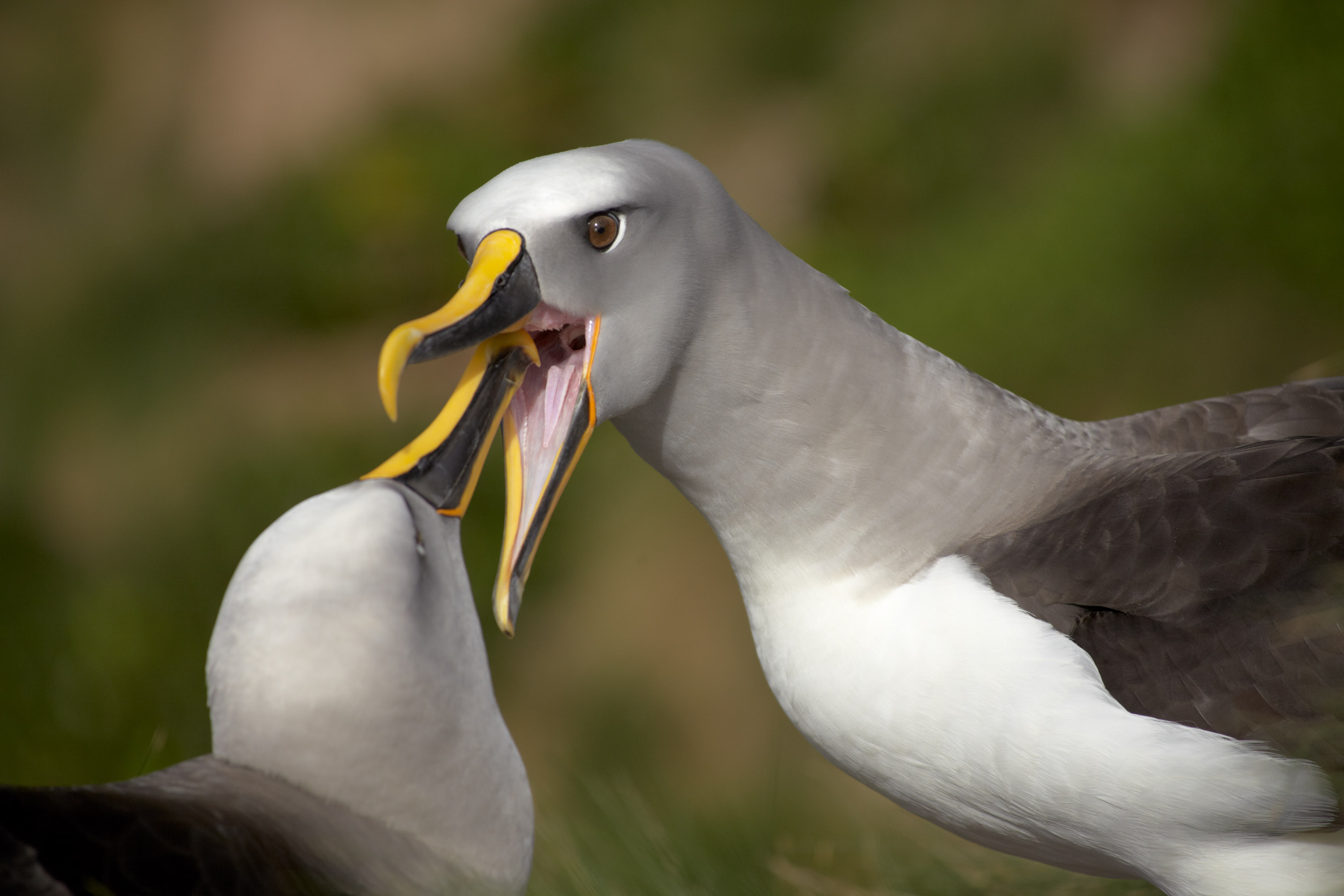 Actively displaying non-breeders; the right-hand bird makes its piercing “wail” call.  Wails echoing in the cliffs are one of the great soundscapes of Buller’s Albatross colonies

Dietary studies (with Gavin James, also from NIWA) have revealed that fisheries discards (mostly of Jack Mackerel, Hoki and macrourids) accounted for two thirds of solid food by weight during the post-guard period at both Solander and the Snares.  The proportion of discards was greater during long trips, that of squid, salps and non-food items (wood and plastic gloves!) greater during short trips, suggesting that the latter are perhaps aimed at filling up the chick with just about anything.  One item that literally stood out from a chick regurgitation was the beak of a cephalopod subsequently identified as that of a giant squid.  An addiction to discards may well have been associated with the population increase observed on the Snares until about 2005, but the recent decline in adult casts some shadows on this sunny picture.  Watch this space.

As well as Sandy Bartle and Paul Sagar, I would like to acknowledge all who have contributed to our research, especially the New Zealand Department of Conservation, Dominique Filippi, Graeme Taylor, Alan Tennyson, Susan Waugh, Bernard West and Chrissie Wickes.  They have all facilitated my trips and made them great memories, despite the sometimes-testing conditions.

Stahl, J.-C. & Sagar, P. 2000.  Foraging strategies and migration of southern Buller’s albatrosses Diomedea b. bulleri breeding on the Solander Is, New Zealand.  Journal of the Royal Society of New Zealand 30: 319-334.

Stahl, J.-C. & Sagar, P.M. 2006.  Behaviour and patterns of attendance of non-breeding birds at the breeding colony in a Buller’s albatross Thalassarche bulleri population at The Snares.  Notornis 53: 327-338.