Featuring ACAP-listed species and their photographers: the Antipodean Albatross by Kath Walker 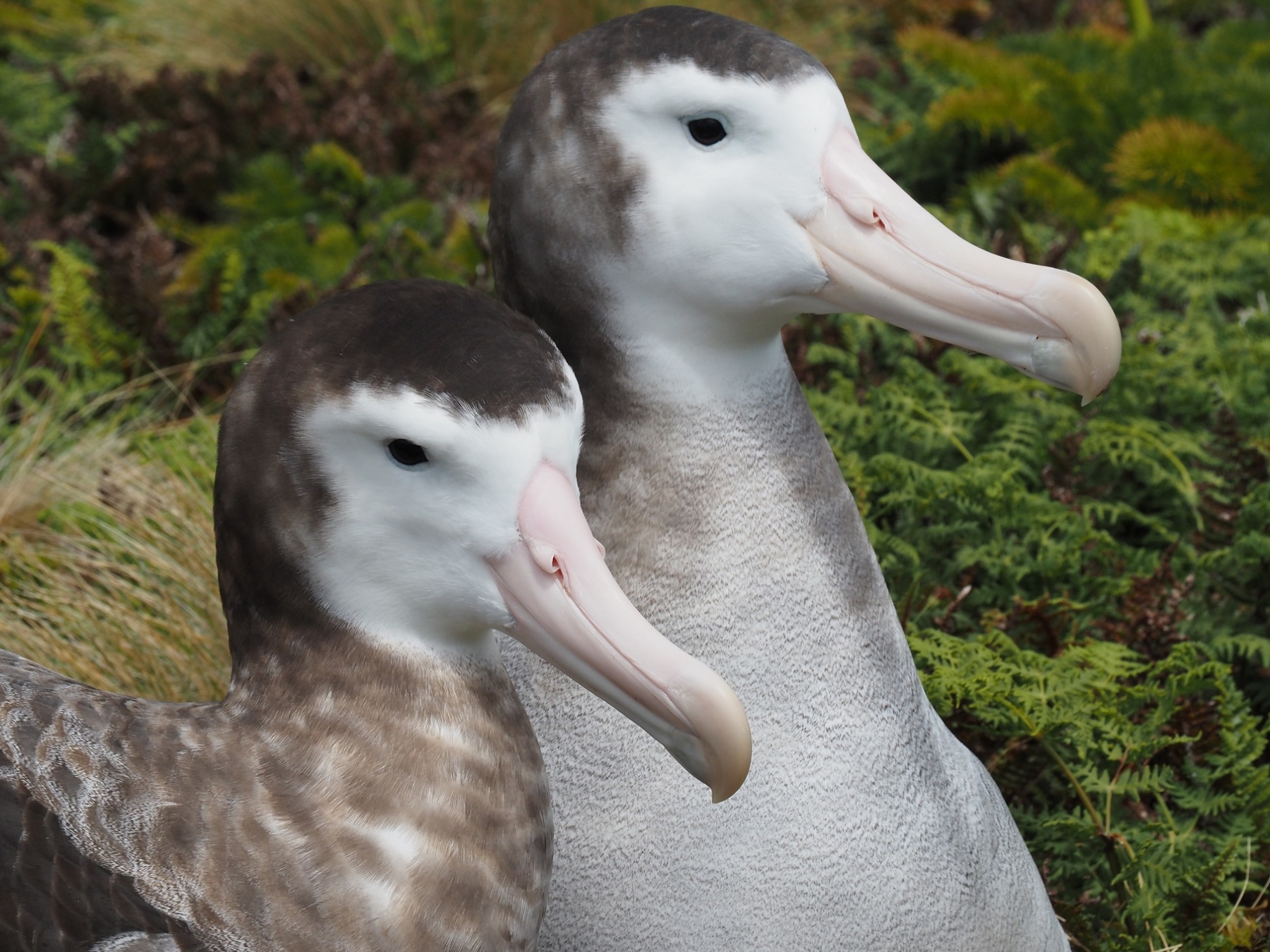 A pair of young adult Antipodean Wandering Albatrosses.  The plumage of the female (on the left) remains dark despite age.  However, by the end of each breeding season the dark tips of the feathers are so worn the white below can show through, giving the bird a “spotty, leopard-like plumage” until she moults.  The dark feathers on the male’s neck will gradually lighten, leaving just faint pencilling, while the well-demarcated black cap remains, although gradually decreased in extent by old age

NOTE:  This post continues an occasional series that features photographs of the 31 ACAP listed species, along with information from and about their photographers.  Here, Kath Walker of New Zealand’s Department of Conservation writes from the field on Antipodes Island of her studies over many years of both the nominate and gibsoni subspecies of the globally Endangered and Nationally Critical Antipodean Albatross Diomedea antipodensis.  In her photo essay Kath refers to these two taxa as Antipodean Wandering and Gibson’s Wandering Albatrosses. 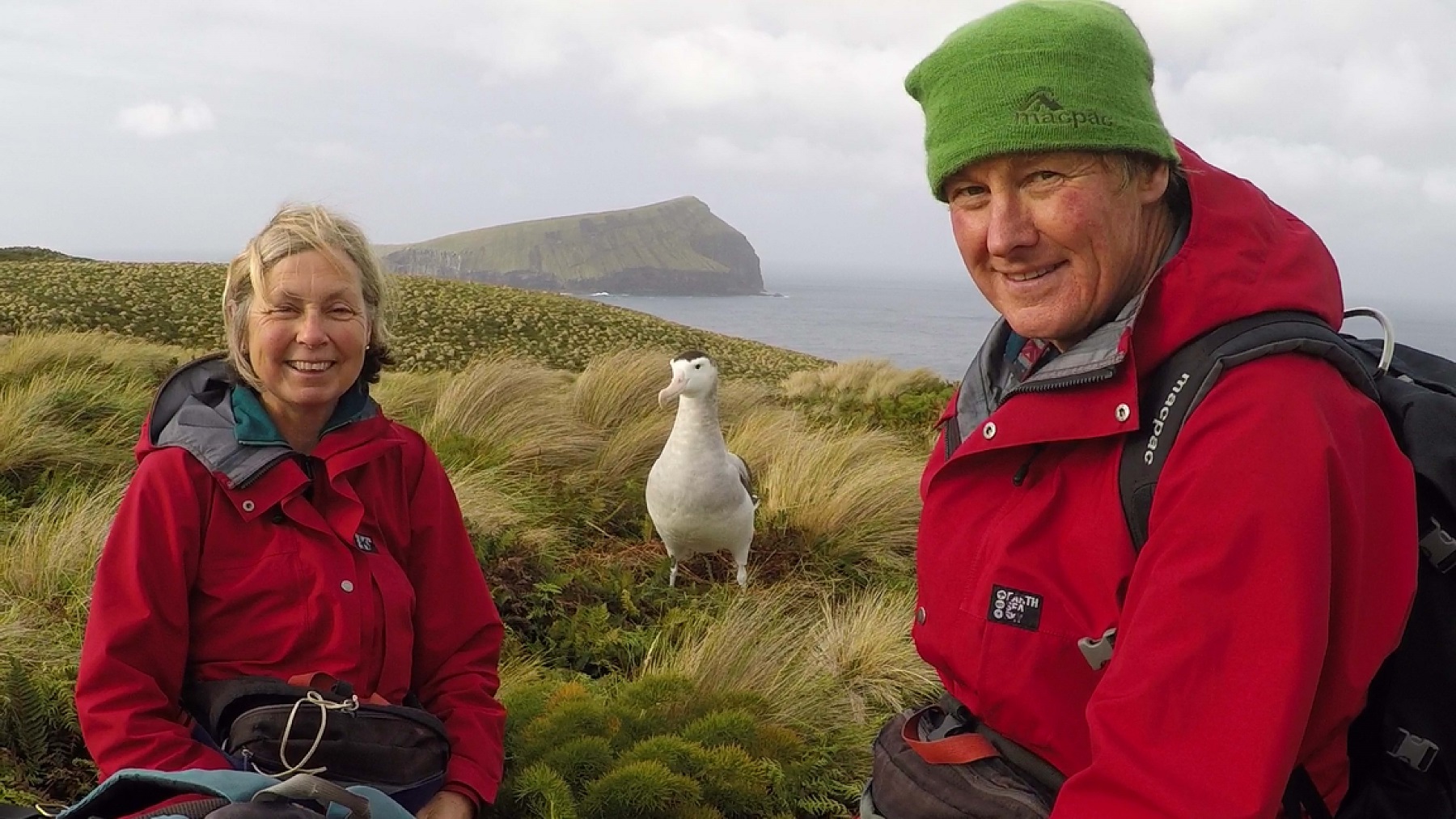 Like some others who’ve written these photo essays, my partner Graeme Elliott and I began working on albatrosses accidentally.  Although we were (and still are) biologists working for the New Zealand Department of Conservation researching ways to recover threatened land birds (Graeme) and large land snails (me), an expedition in 1989 in search of the elusive and Vulnerable Auckland Rail Lewinia muelleri on Adams Island changed the course of our lives.  Whilst on Adams Island, we attempted very rough population estimates of all the other bird species, including the Gibson’s subspecies of the Antipodean Albatross. 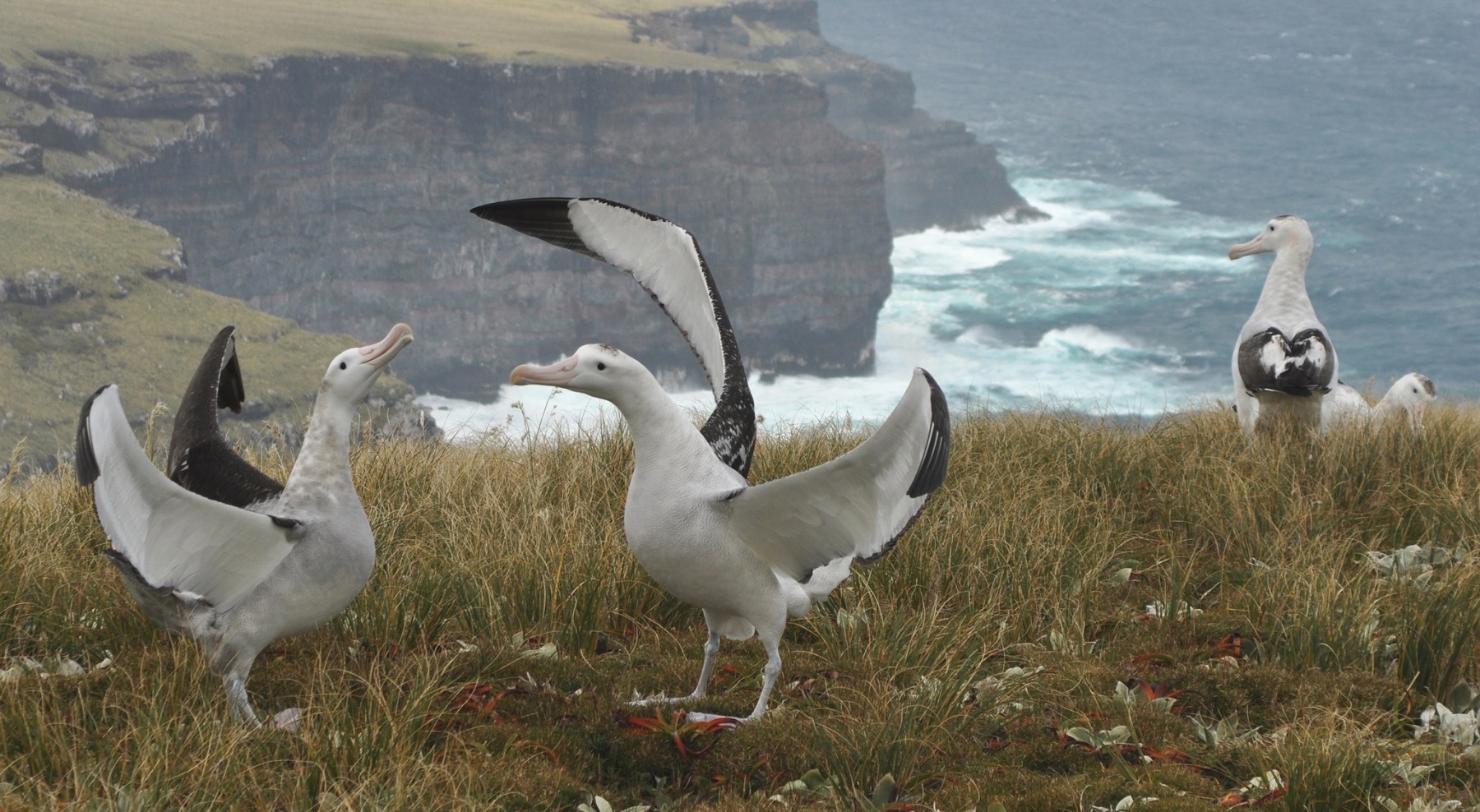 The news that the Wandering Albatross D. exulans population on France’s Possession Island in the southern Indian Ocean had halved in the 1980s made us worry about the trends in the wandering albatross (sensu lato) populations on New Zealand’s sub-Antarctic islands.  While it was then thought the New Zealand birds comprised nearly half the world’s population of wandering albatrosses, their breeding grounds were seldom visited so there was little quantitative knowledge of the sizes, let alone the trends, of the albatross populations there. 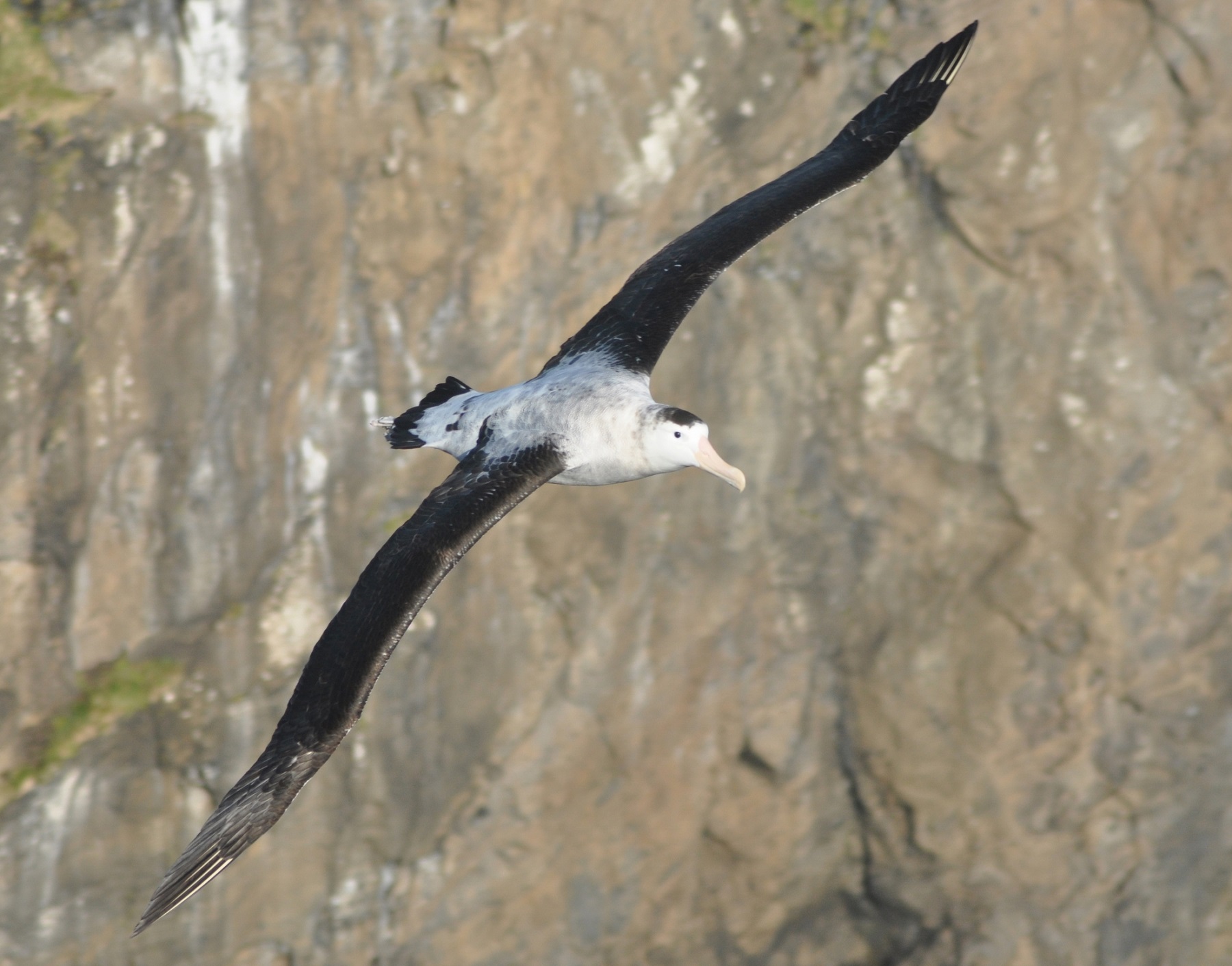 In 1991 on Adams Island with Peter Dilks and Jean-Claude Stahl, and later, on Antipodes Island with the help of Jacinda Amey, Gerry Clark and Gus McAllister, we started trying to count the numbers of pairs of breeding Gibson’s Wandering and Antipodean Wandering Albatrosses, respectively. However, both islands have such extensive albatross habitat and such deep tussock and scrub, it was difficult to obtain enough precision for trend calculations. 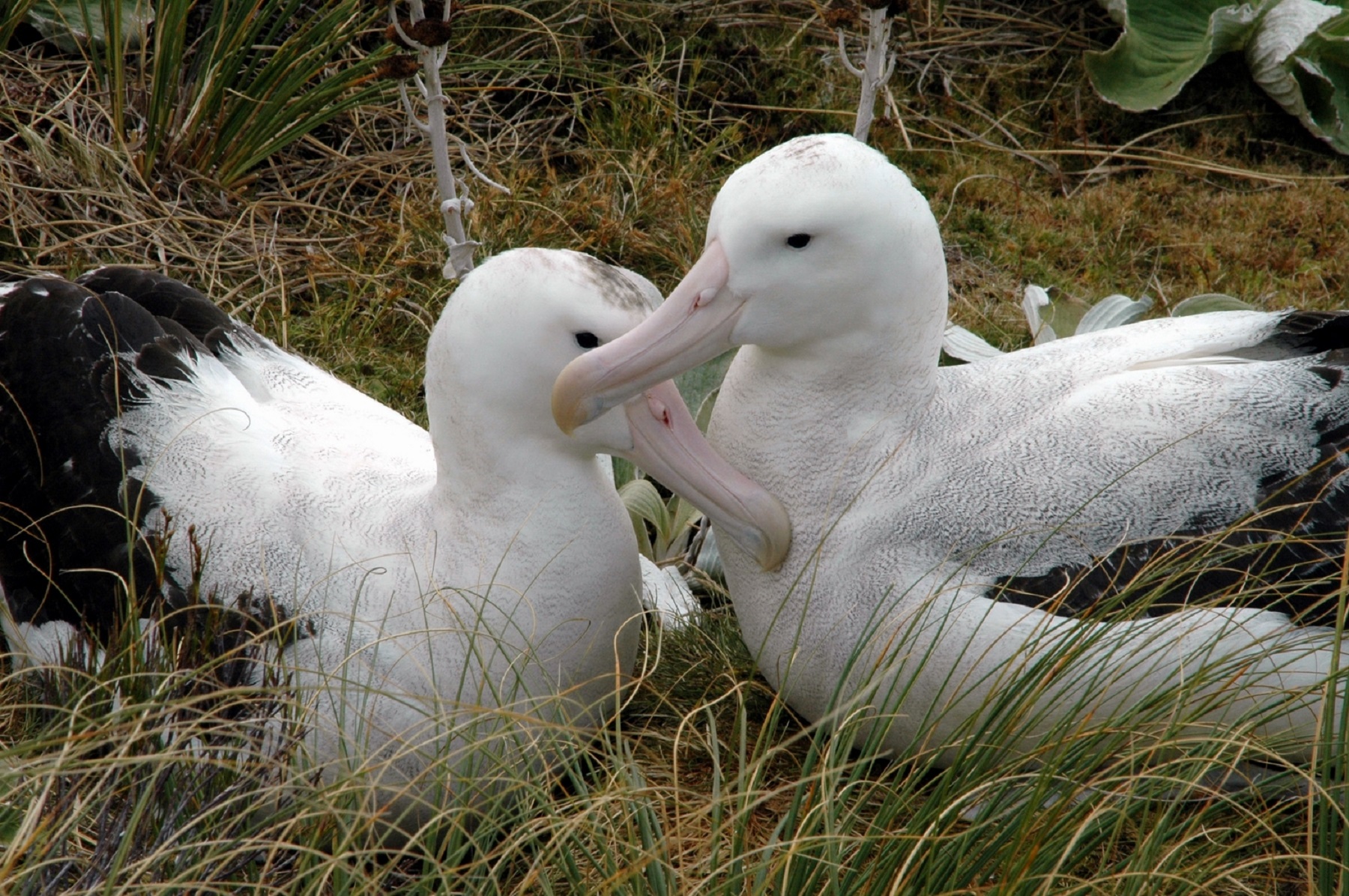 A pair of Gibson’s Wandering Albatrosses, with the female, identified by the scattering of dark feathers on the head, on the left 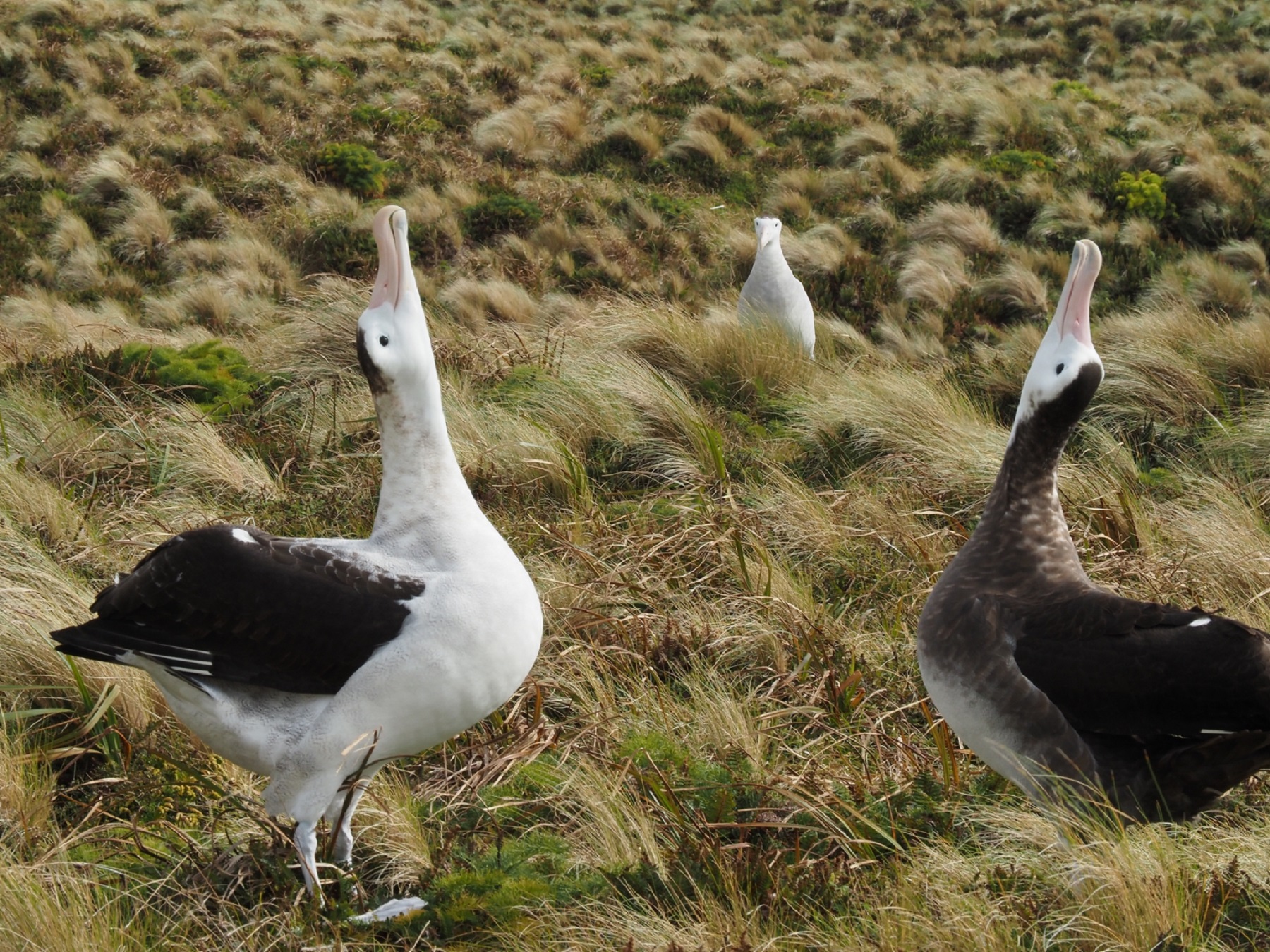 So began the last 30 years of taking leave to organize and participate in annual expeditions to Adams and Antipodes Islands to study key population parameters in smaller better-defined portions of each island, as well as the bird’s at-sea distributions.  Many other colleagues have helped with the work over the years, particularly Peter McClelland, Sheryl Hamilton, Alan Wiltshire, Erica Sommer, Kalinka Rexer-Huber and Graham Parker.  At first both Gibson’s Wandering and Antipodean Wandering Albatross populations seemed to be recovering after declines during the 1980s.  But in 2005 these trajectories suddenly reversed, beginning a steep and long-lasting decline, particularly of the nominate population on Antipodes Island.  Research in recent years has concentrated on identifying the areas of overlap nowadays between longline fisheries and Antipodean Wandering Albatrosses, as changing oceanic conditions, and expanding ranges of both birds and fishers, seem to be increasing fatal bird/longliner interactions, particularly of females who use more northerly waters than do males. 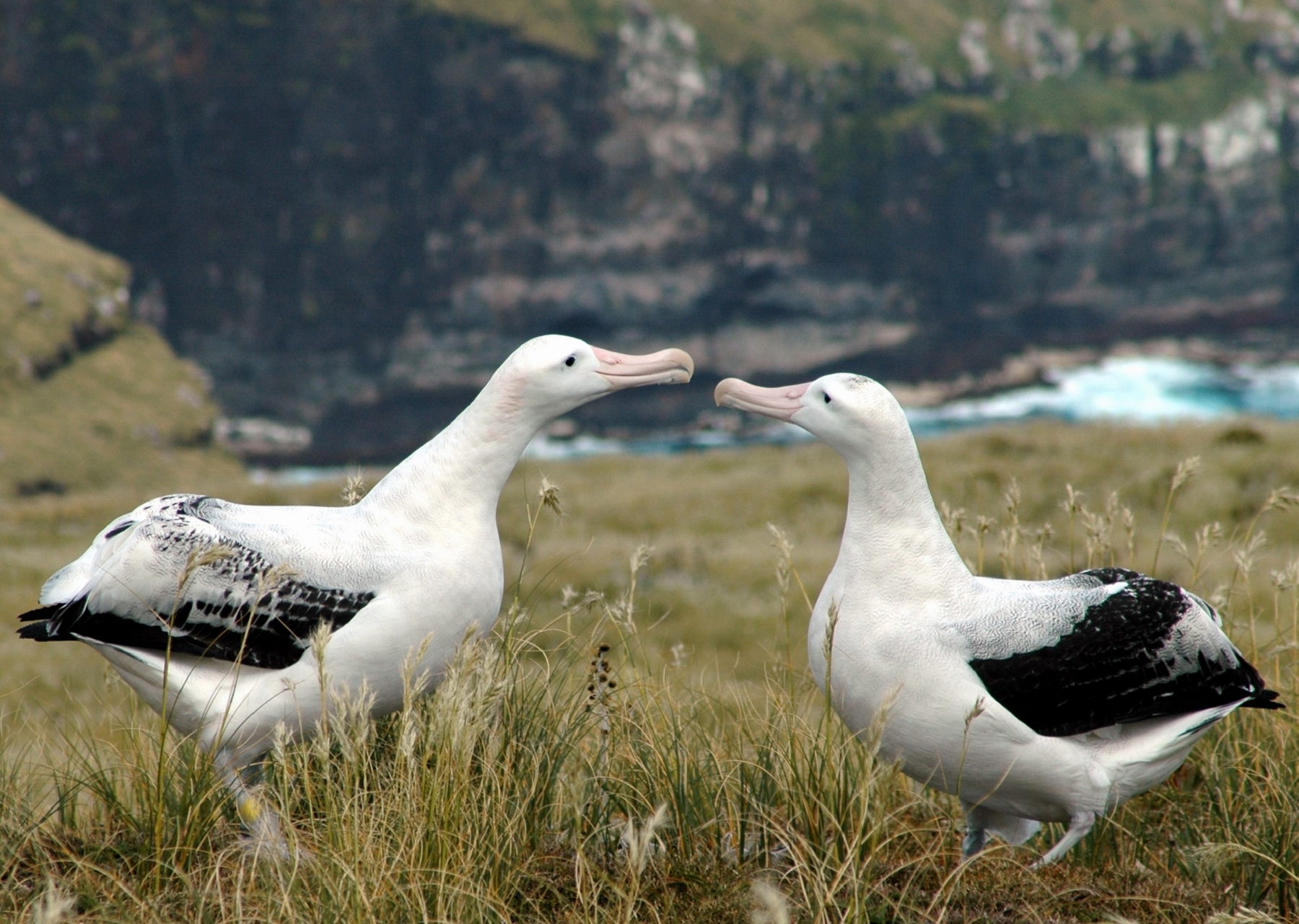 A pair of older adult Gibson’s Wandering Albatrosses (female on the right) courting on the southern slopes of Mount Dick on Adams Island.  Note the characteristically large area of white feathers on both male and female’s “elbows”

Gibson’s Wandering and Antipodean Wandering Albatrosses behave more like separate species than subspecies, with distinctive plumage patterns and foraging distributions (albeit with a little overlap) and separate breeding grounds and timetables (Gibson’s breeding three weeks earlier than Antipodean).  Whereas this complicates description of a generalized “Antipodean” species in guidebooks, studying two discrete taxa at the same time using identical methods has proved helpful in untangling the causes of their differing population trajectories. 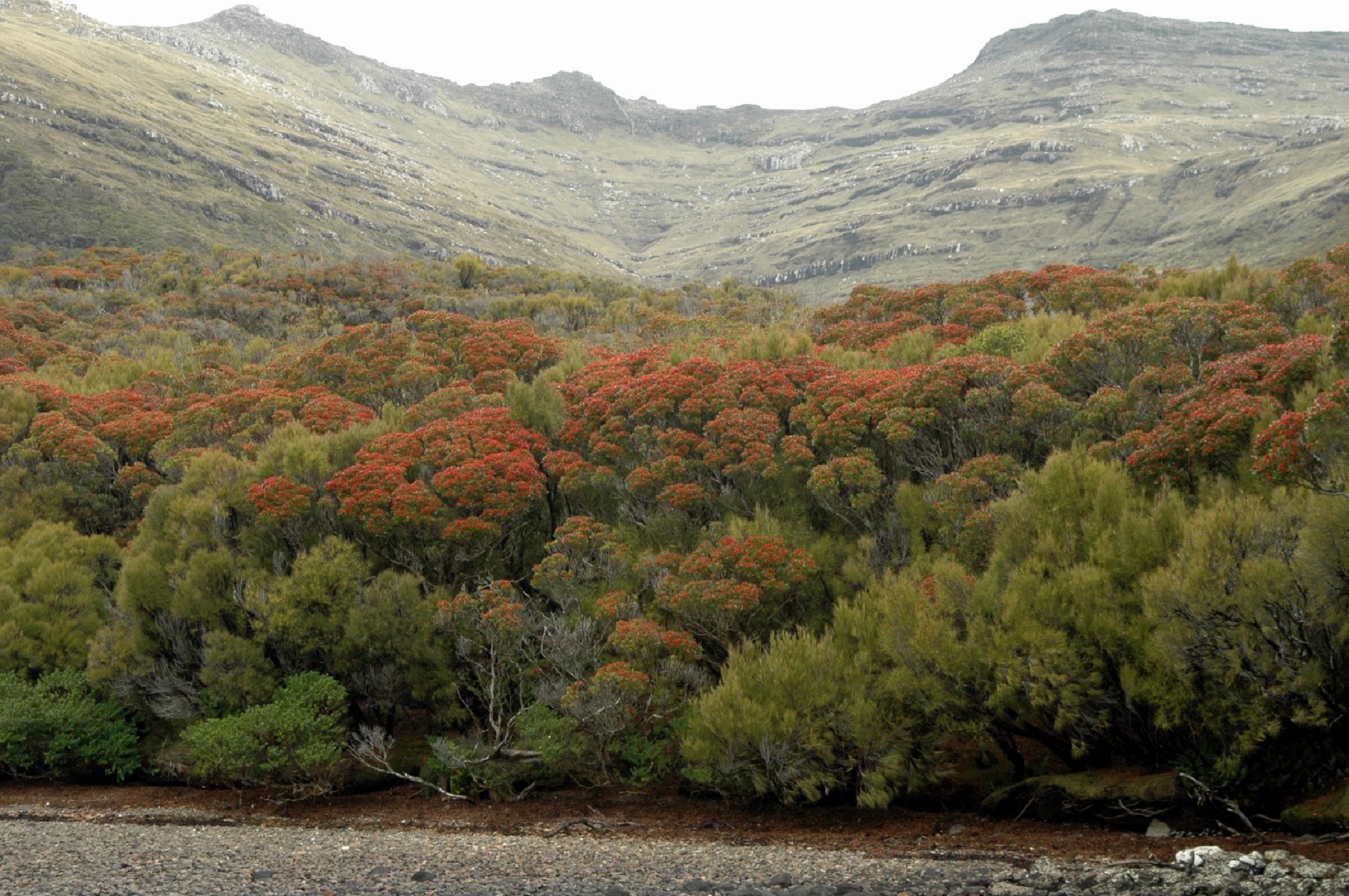 Flowering Southern Rata Metrosideros umbellata and Turpentine Scrub Dracophyllum uniflorum forest on the sheltered northern side of Adams Island, supplanted higher up by tussock and fellfield.  Although a few Gibson’s Wandering Albatrosses nest in the tussock on these northern slopes, most birds nest on the island’s southern slopes, necessitating a long walk for researchers from the boat landing over the summit ridge

For us the expense and difficulty of obtaining a 30-year dataset on a long-lived biennial species which breeds on remote uninhabited islands across angry seas and living for long periods in tents and basic huts are more than compensated for by the sheer joy of living where wild things and the natural world still predominate.  And the happiness is not just that we are lucky enough to be working with seabirds which live their lives on the surface of the land, rather than hidden deep within burrows.  Nor that these birds survive so long they’ve become familiar as individuals, with some observed for over 28 years as they fledged, partied with other teenagers, settled down 10 m from their parents, lost mates, and started again.  Equally it lies in the land itself, with Adams and Antipodes Islands as distinctive and addictive as their albatross inhabitants.  Adams Island at 11 000 ha is much bigger, higher, colder, wetter and grander than the more northerly 2000-ha Antipodes Island.  Although it does have a harsher climate, Adams Island at the southern end of the Auckland Island Group has an enviable sheltered harbour on one side which allows the growth of proper forest whilst Antipodes Island, farther from the New Zealand mainland, has a simpler vegetation of grasses, ferns and some low shrubland, and no safe anchorage.  With the successful removal of introduced House Mice from Antipodes Island in 2016, both islands are now near-pristine, essentially weed-free, full of megaherbs and teeming with birds.  The only way we’ve found to feel nearly comfortable about living in these “Gardens of Eden” continuing to bother the albatrosses with bands, tracking devices, counting, measuring and observing, is to work as hard as we can at ensuring these wonderful birds and wild places survive. 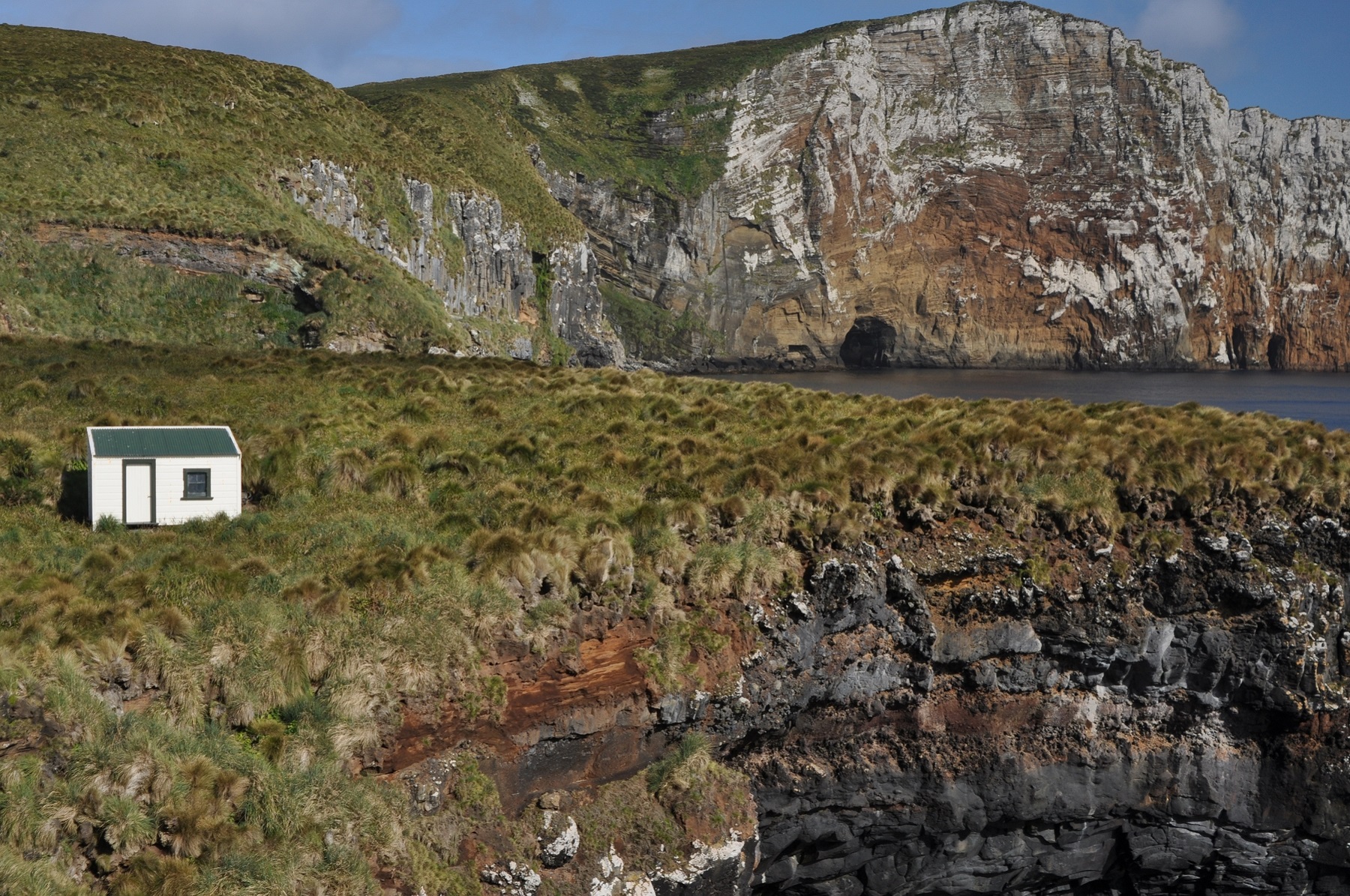 The cliffs of Perpendicular Point and Hut Cove on Antipodes Island, with a depot for castaways in the foreground, first erected in 1894

The great albatrosses of the genus Diomedea comprise two distinct types: the two primarily shelf-feeding royal albatrosses and the more pelagic “wandering” albatrosses, treated as four species by the Albatross and Petrel Agreement.  Given the strong kinship within the wandering-type complex, we prefer to use “wandering” as part of each common name for these four species originally placed within Diomedea exulans, despite it becoming not a group descriptor but the common name for just one in the wandering group - Diomedea exulans.  We’re eternally hopeful that our preference, initially suggested by one of our heroes of albatross conservation, Graham Robertson, will catch on!