Featuring ACAP-listed species and their photographers: the Black-browed Albatross by Richard Phillips 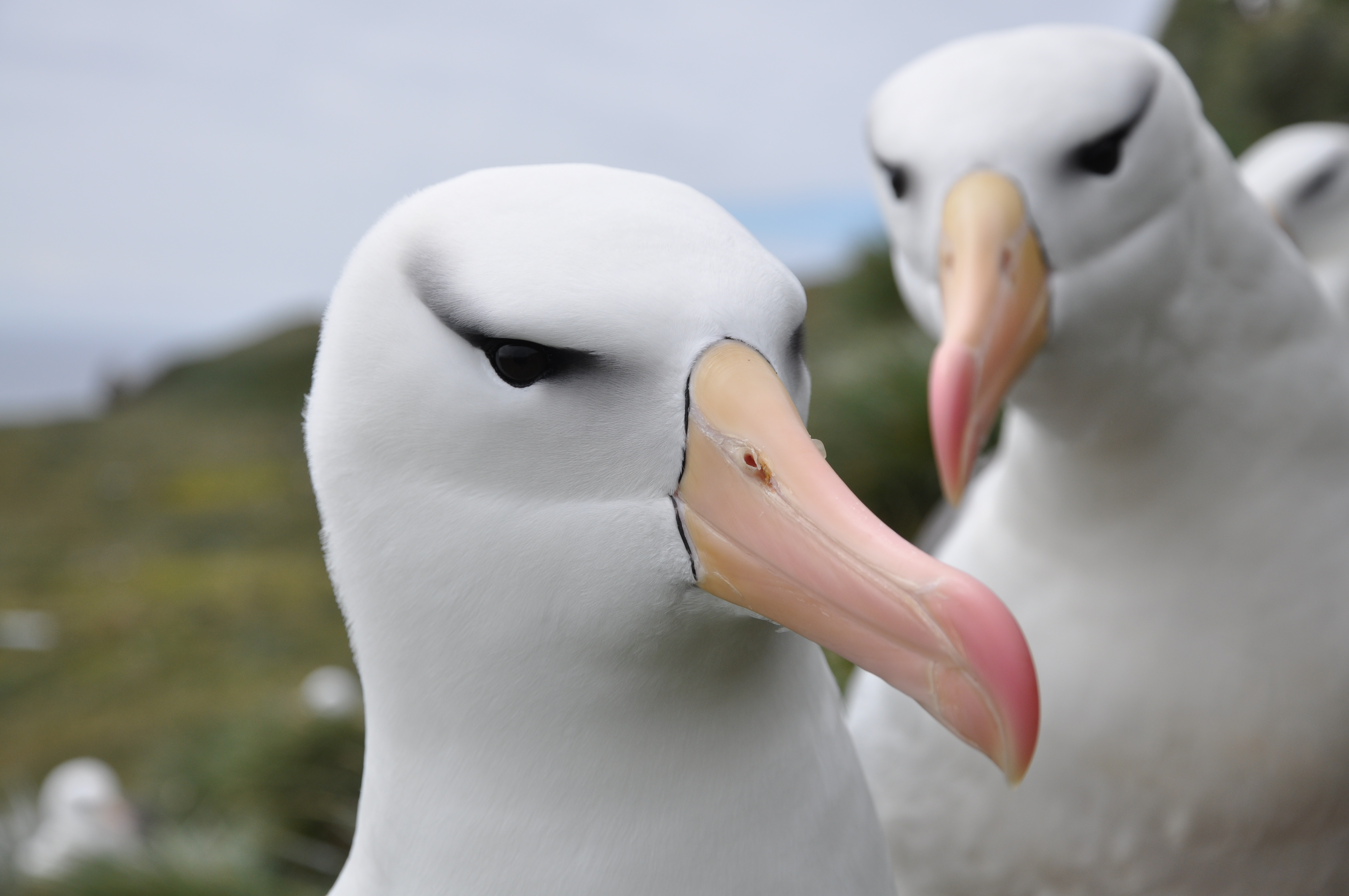 NOTE: This post continues an occasional series that features photographs of the 31 ACAP-listed species, along with information from and about their photographers.  Here Richard Phillips writes about his experiences with Black-browed Albatrosses Thalassarche melanophris.  Although listed as Least Concern globally, the population at South Georgia (Islas Georgias del Sur)*, which is the third largest of any island group, has been in steep decline since the 1970s and is considered to be of high priority for conservation by the Albatross and Petrel Agreement.  Richard started his career working on UK seabirds at Glasgow and Durham Universities, and then joined the British Antarctic Survey (BAS) in 2000, where he is now the Head of the Higher Predators and Conservation Group.  He has been Convenor or Vice-convenor of the ACAP Population and Conservation Status Working Group or of one of its predecessors, the Breeding Sites Working Group, since 2007. 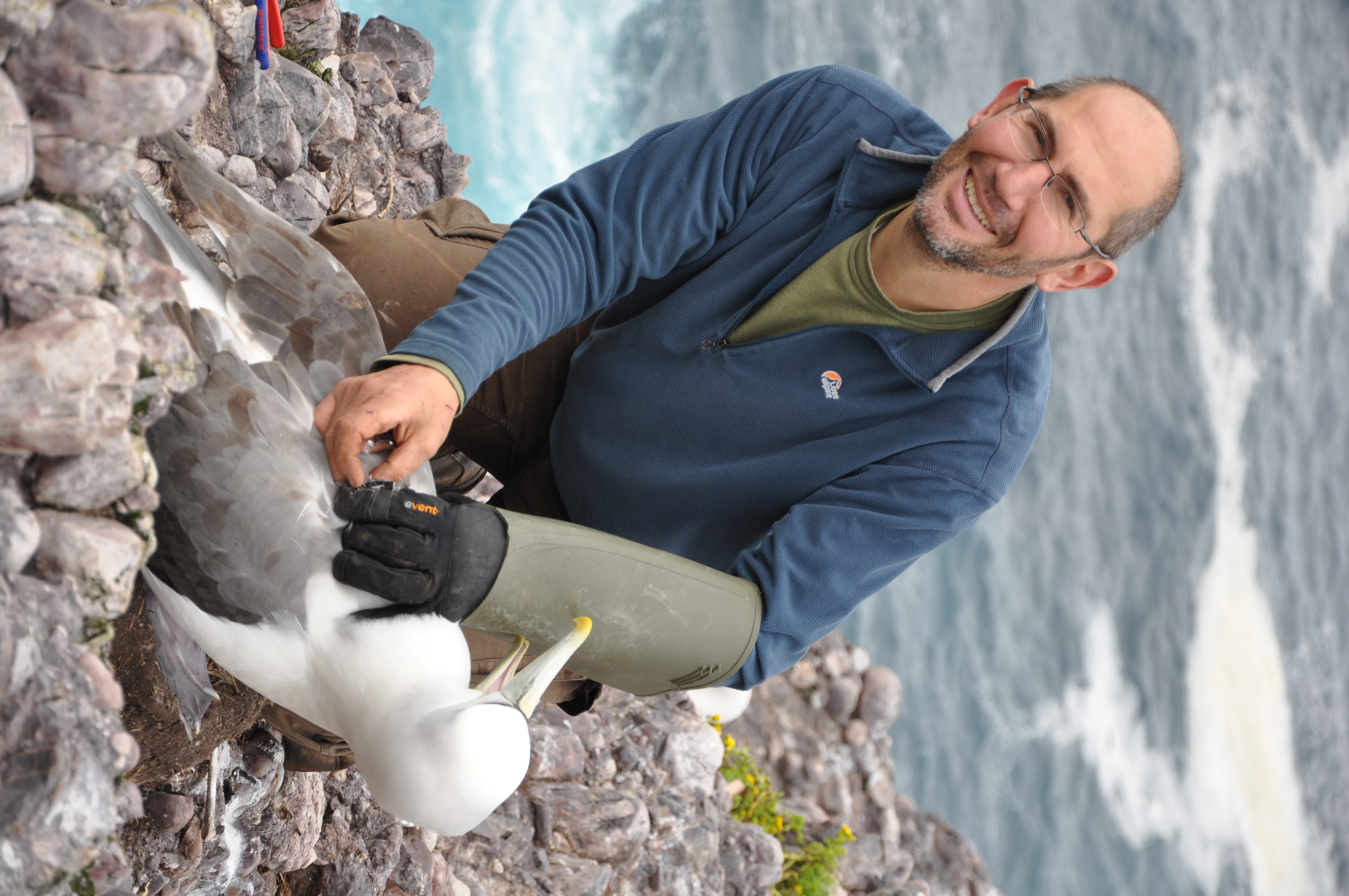 Richard Phillips removes a tracking device from a Shy Albatross T. cauta on its nest on Albatross Island in 2013.  By using the armguard (made out a of rubber boot) and glove, the tape-mounted device can be removed in two minutes without any restraint.  The impacts of tracking are negligible, but provide data on movements and fisheries overlap with direct application to conservation; photograph by Rachael Alderman

The Black-browed Albatross is the most common albatross species, with a global population estimated at roughly 690 000 breeding pairs, and a circumpolar breeding range in the Southern Ocean. Most adults breed annually and, like all ACAP-listed species, lay a single egg. The egg hatches after 80 days of incubation and the chick is reared by both parents for four to five months. Black-browed Albatrosses feed mainly over shelf and shelf-slope waters, and at some sites, including South Georgia (Islas Georgias del Sur)*, as well as over deep water farther offshore. Spatial segregation of birds from different populations (island groups) during the nonbreeding season is high, but not complete. 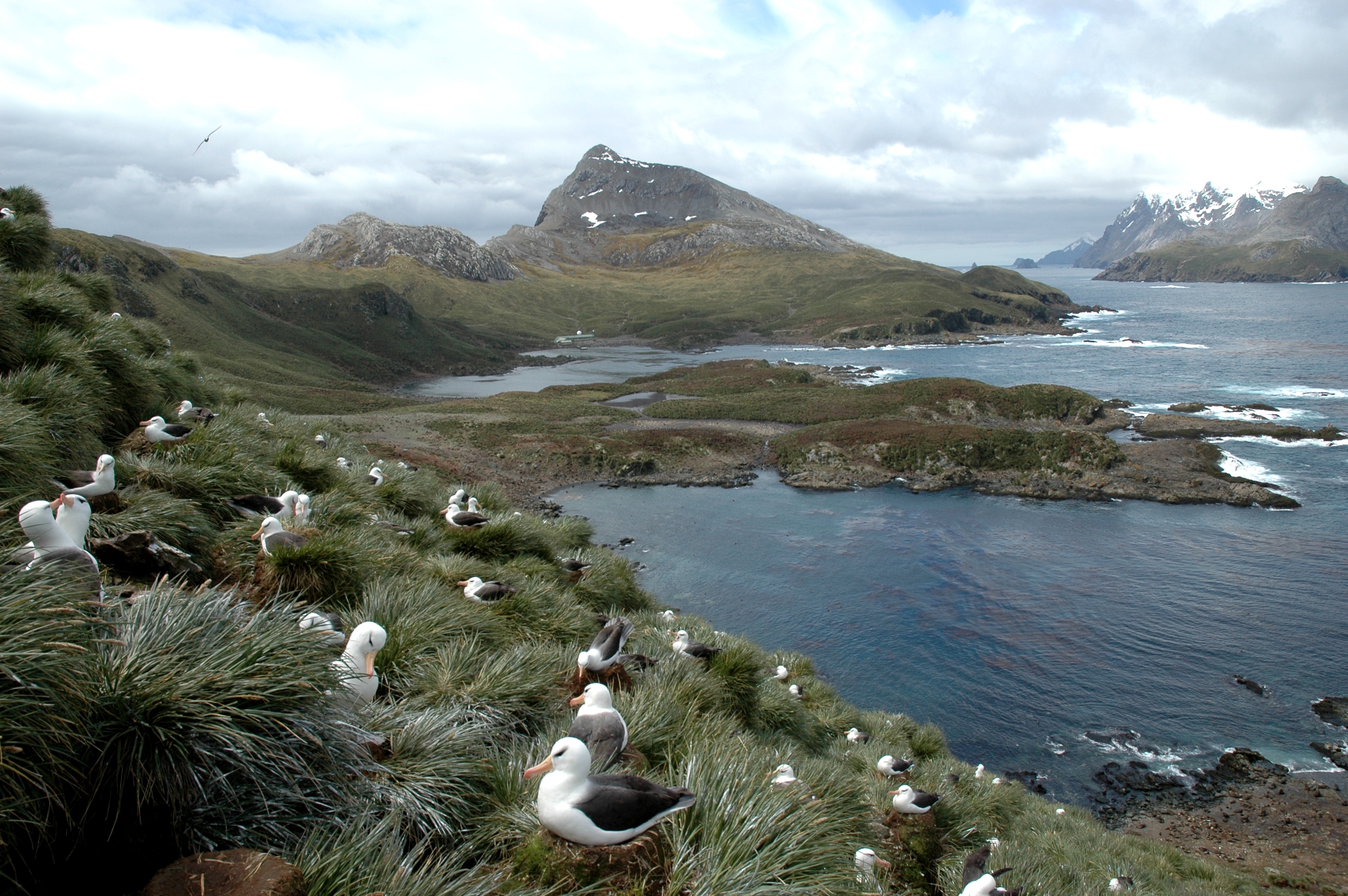 A Black-browed Albatross breeding colony on Bird Island, with the research station and La Roche (the highest peak on the island) in the distance.  The landmass on the right across Bird Sound is the main island of South Georgia (Islas Georgias del Sur)*

By this coming New Year (2022), I will have worked on seabirds for 30 years. The time has flown by and I could not have asked for a better group of field assistants, students, postdocs, other colleagues and collaborators! For around a decade my fieldwork was on skuas, fulmars, gannets and kittiwakes around the United Kingdom, and then from 2000 my attention shifted to the various albatross, petrel and skua species in the Southern Ocean. However, the place where I have spent by far the most time is Bird Island, South Georgia (Islas Georgias del Sur)*, with seven trips so far, and hopefully more to come. 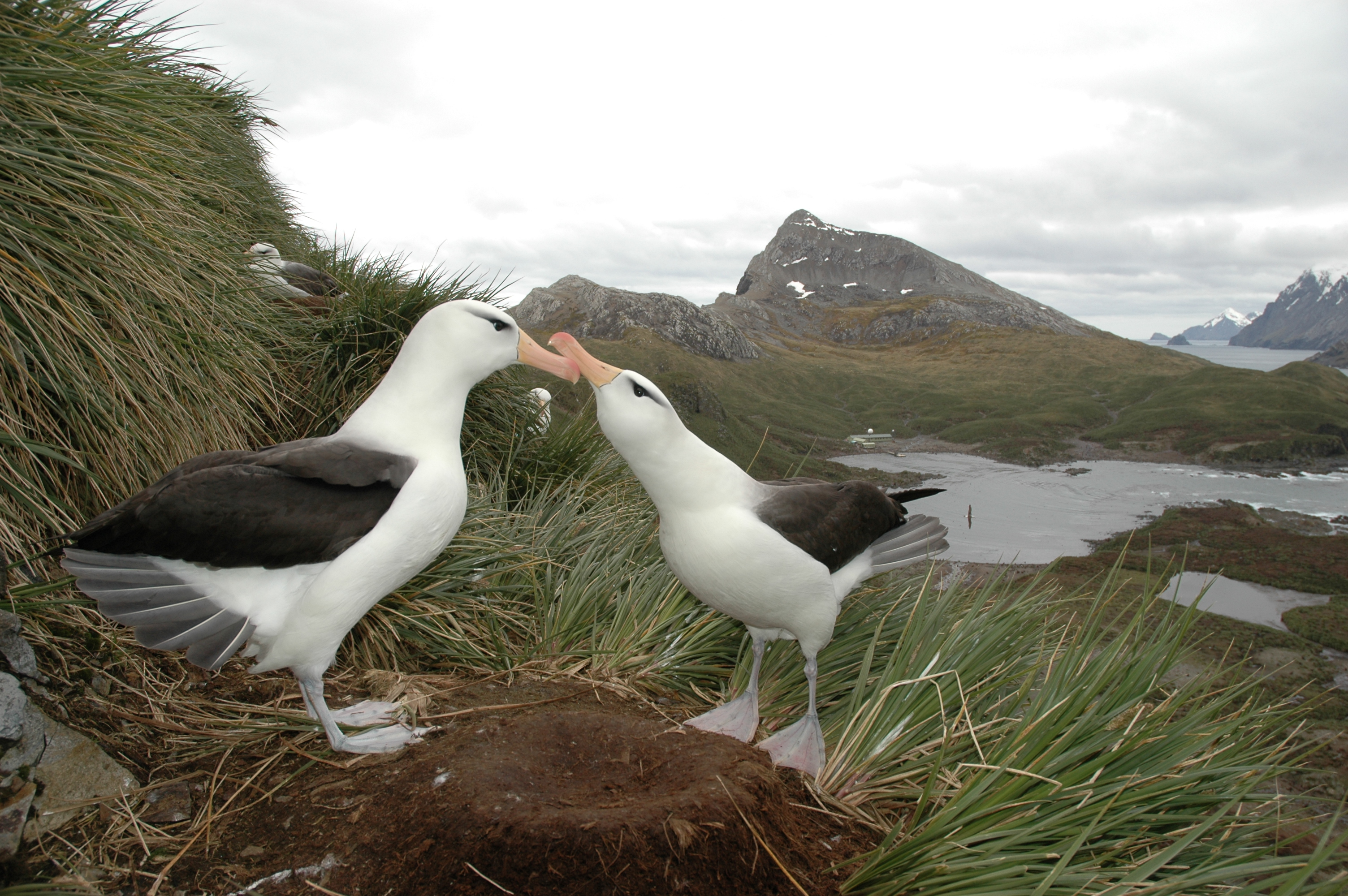 Black-browed Albatrosses display behind an empty nest on Bird Island

As for many sites with breeding seabirds, Bird Island is an incredible place.  The island was discovered in 1775 by Captain James Cook, who came up with the name for good reason.  These days, hundreds of thousands of seabirds, and tens of thousands of seals, share the island with around 10 human inhabitants during the summer, and just four in the winter. The first visits to study albatrosses at Bird Island were in 1958-1964, with pioneering work led by the late Lance Tickell (1930-2014), whose magnum opus, “Albatrosses” was published in 2000.  The island was then visited by field parties in the summer from 1971-1981, and year-round thereafter, with the seabird monitoring and research programmes led by the late Peter Prince (1948-1998) and John Croxall CBE, FRS.  Along with a succession of postdocs and collaborators, they produced a wealth of papers on ecology and population dynamics of the island’s seabirds. 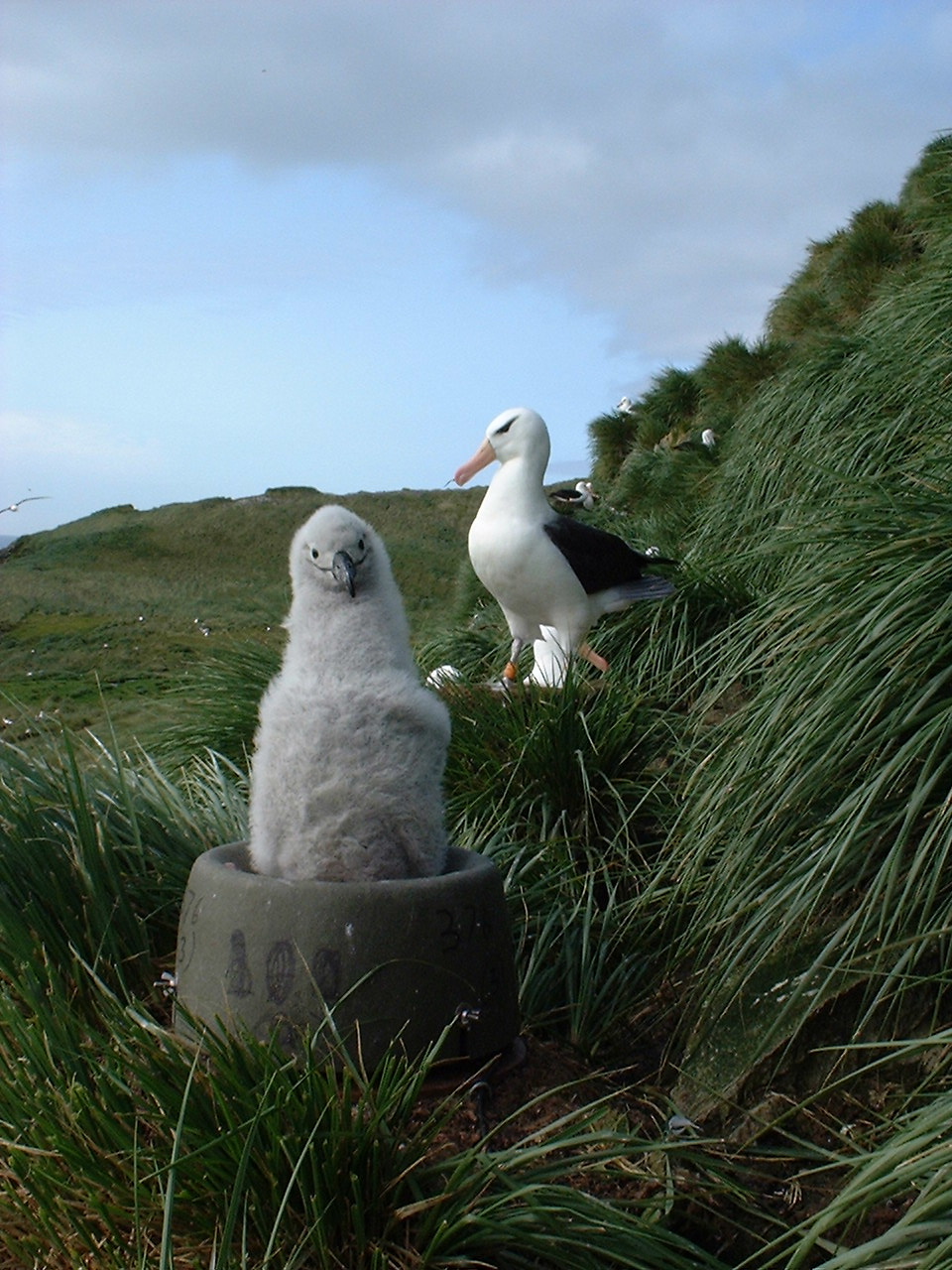 I first visited Bird Island in November 2000, having started at BAS just a few weeks before.  I still remember walking for the first time through (sub) Colony J to identify banded adults and check breeding success of Black-browed Albatrosses with field assistant, Daf Roberts, trying to work out why it was only me that was being pecked repeatedly in the back of the calf.  I’ve since spent many days deploying automatic weighing platforms or tracking devices (geolocator-immersion and GPS loggers, time-depth recorders and satellite transmitters) on several hundred Black-browed Albatrosses.  Fortunately, I now only get pecked occasionally when one of the birds quite reasonably reminds me to pay better attention. 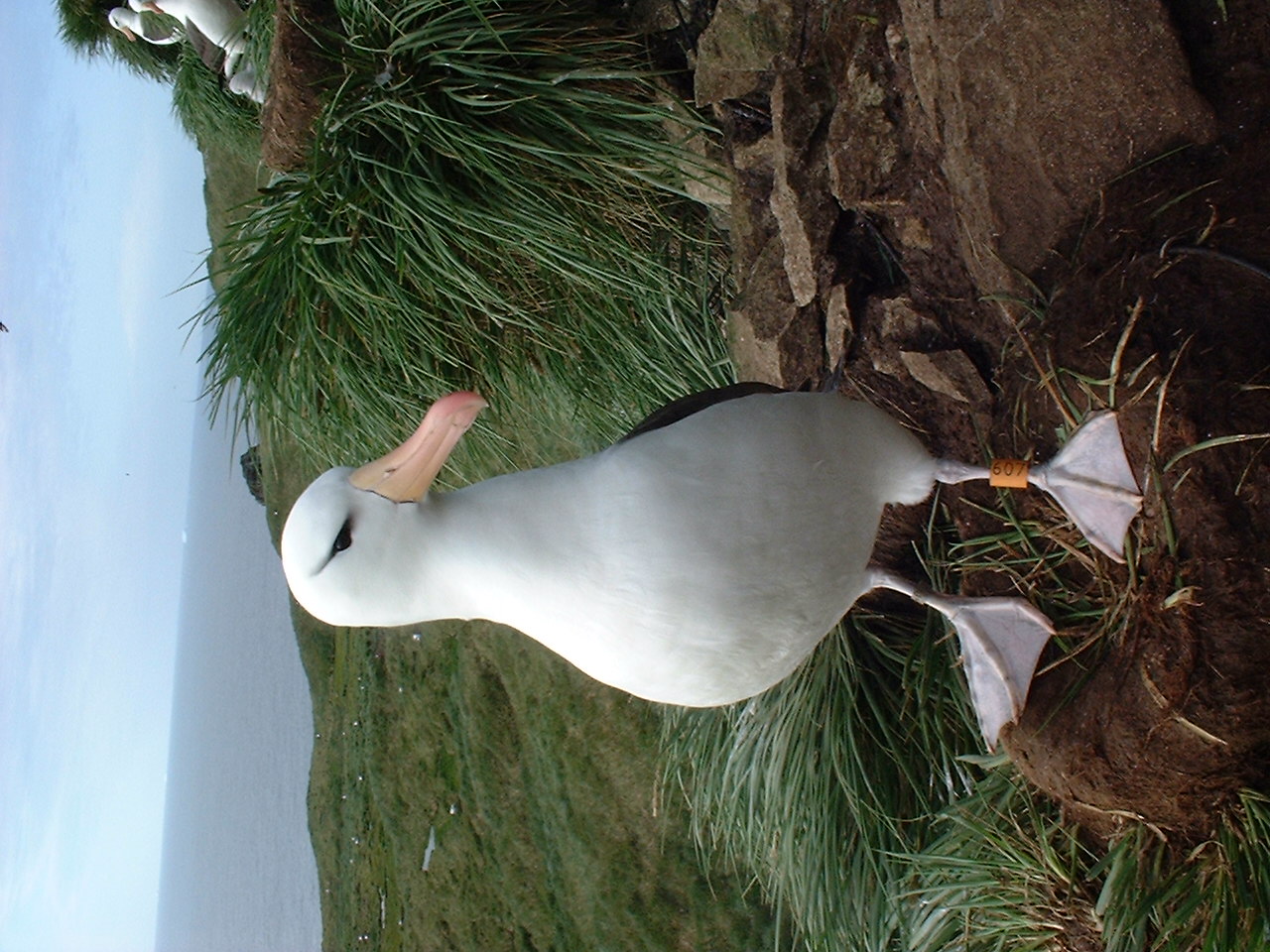 Colour-banded Orange 607 stands on its empty nest made ready for the egg with some green lining,  photographs by Richard Phillips

The research on Black-browed Albatrosses has revealed diverse aspects of their behaviour and ecology, including diet, energetics, regulation of provisioning, diving, activity budgets and other aspects of foraging behaviour at sea, and environmental drivers of marine distribution and population dynamics.  In the 20 years since I was first in Colony J, its number of Black-browed Albatrosses has declined by 50% from 258 to 132 breeding pairs. Black-browed Albatrosses elsewhere on South Georgia (Islas Georgias del Sur)* have declined at least as quickly as those on Bird Island, and over the same period that likely amounts to over 60 000 breeding adults lost without replacement from the island group.  A major focus of the work has therefore been on understanding threats to this species, which are changes in availability of Antarctic Krill Euphausia superba – one of their main prey items – and incidental mortality (bycatch) in longline and trawl fisheries.  We are particularly interested in identifying those fisheries that represent the greatest bycatch risk for Black-browed Albatrosses, accounting for sex, age and season.  This information has been used by ACAP, BirdLife International, other NGOs and governments to press for improvements to fishing practices, better monitoring of bycatch rates and improved compliance with bycatch-mitigation regulations.

Wakefield, E.D., Phillips, R.A. & Matthiopoulos, J. 2014. Habitat-mediated population limitation in a colonial central-place forager: the sky is not the limit for the black-browed albatross. Proceedings of the Royal Society B Biological Sciences doi.org/10.1098/rspb.2013.28833.