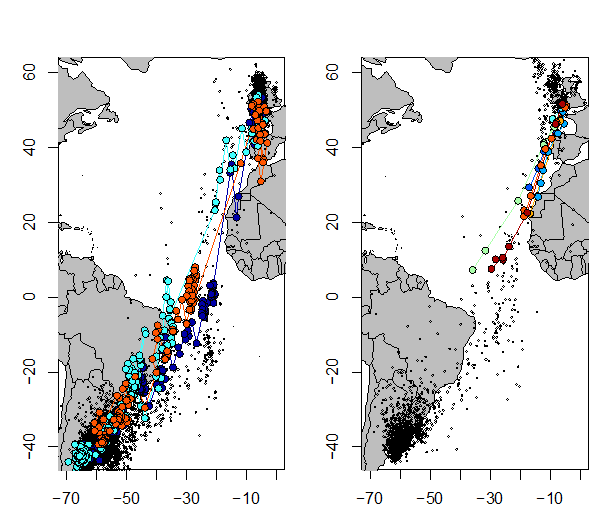 “Although mechanisms of genetic and social inheritance have been implicated in determining the migratory routes of birds, it is unclear what their relative contributions are in species where outbound and return migration routes differ (‘loop migrants’). Here, we used biologging devices to follow Manx Shearwaters (Puffinus puffinus), a long-lived seabird with a trans-Atlantic loop migration, from before their first migration until their 3rd calendar year. We found that shearwaters undertake first migration without their parents, setting off almost immediately upon fledging and moving along a more direct trajectory than adults, before wintering in same part of the South Atlantic as their parents and subsequently iteratively developing their return migration route over the next 3 years, each time returning—unlike their parents—via a Western Atlantic route. We propose that first outbound migration in Manx Shearwaters is broadly consistent with a genetically inherited vector, that both the outbound and return migration trajectories are unlikely to be learnt from experienced conspecifics, and that return migration in Manx Shearwaters (and perhaps loop migrants more generally) may be informed by genetically inherited information and/or local environmental conditions.”