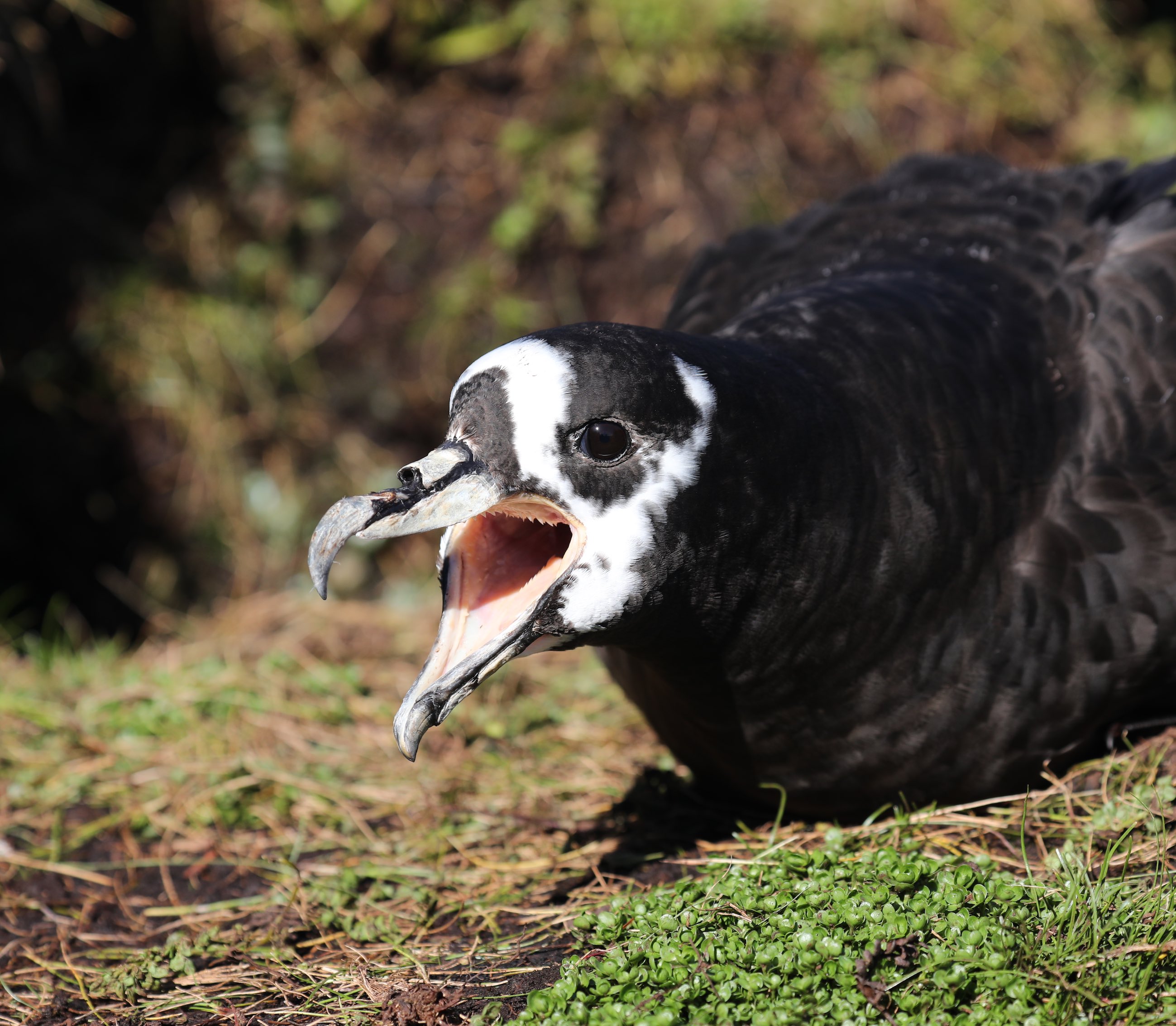 A Spectacled Petrel calls from outside its burrow on Inaccessible Island

NOTE:  This post continues an occasional series that features photographs of the 31 ACAP-listed species, along with information from and about their photographers.  Here, Peter Ryan, Director of the University of Cape Town’s FitzPatrick Institute of African Ornithology, writes about the population research he has conducted over a span of three decades on the Vulnerable Spectacled Petrel Procellaria conspicillata, endemic to the South Atlantic’s Inaccessible Island.  Professor Ryan’s account completes photo essays for the five members of the genus, all of which are ACAP listed.  Access accounts for all the species covered so far in the series in the Photo Essays section on this website. 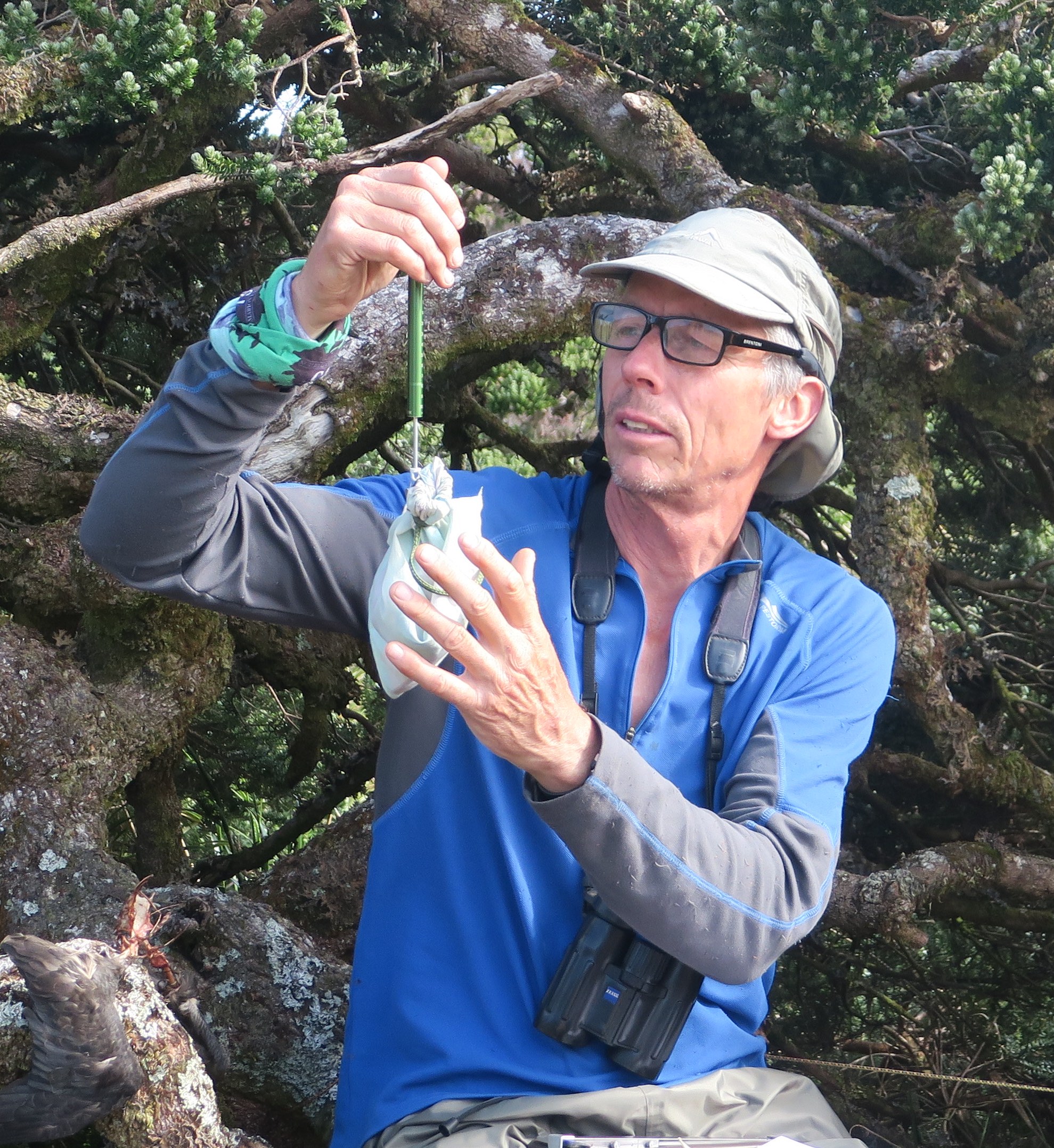 I am often asked what is my favourite bird.  I don’t have an answer; there are so many cool birds that it’s impossible to pick just one.  One contender for the title is the Spectacled Petrel, although in truth, this is coloured as much by my fondness for Inaccessible Island, its sole breeding site, as it is for the bird itself. 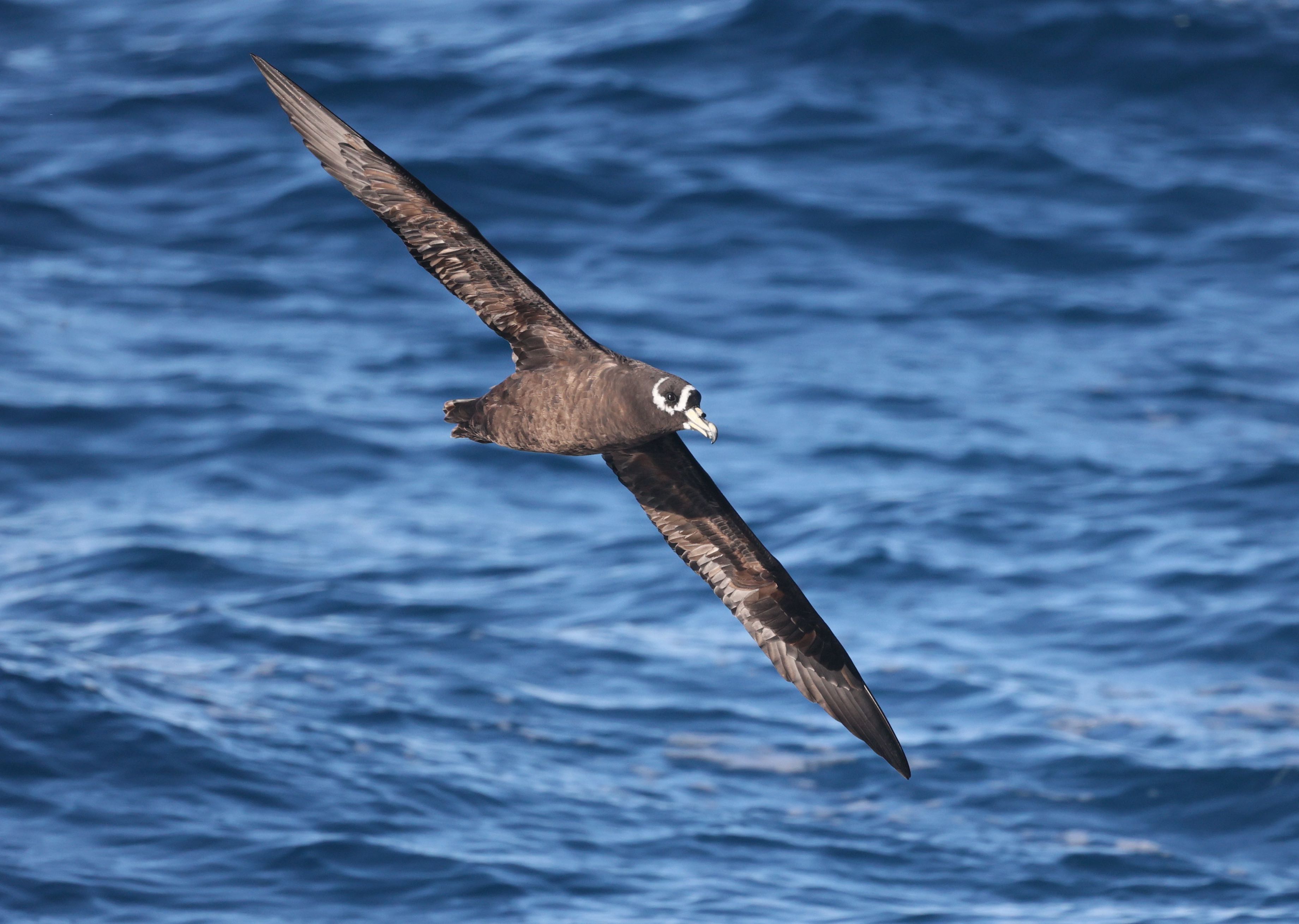 A Spectacled Petrel at sea, known as a ‘Ringeye’ to Tristan Islanders

I have been extremely privileged to visit many seabird breeding islands, but the island where I have spent most time is Inaccessible, the larger of the two uninhabited islands in the Tristan archipelago. I first visited Inaccessible for a few hours in 1984, and at the time didn’t think that I would ever get back there.  I was landed by helicopter at Blenden Hall, near the west point of the island, far from where Spectacled Petrels breed on the island plateau.  It was only in 1987, when I returned for a few weeks to study the metabolic rate of the endemic and Vulnerable Inaccessible Island Rail Laterallus rogersi, the world’s smallest surviving flightless bird, that I finally got to see a Spectacled Petrel at its nest burrow. 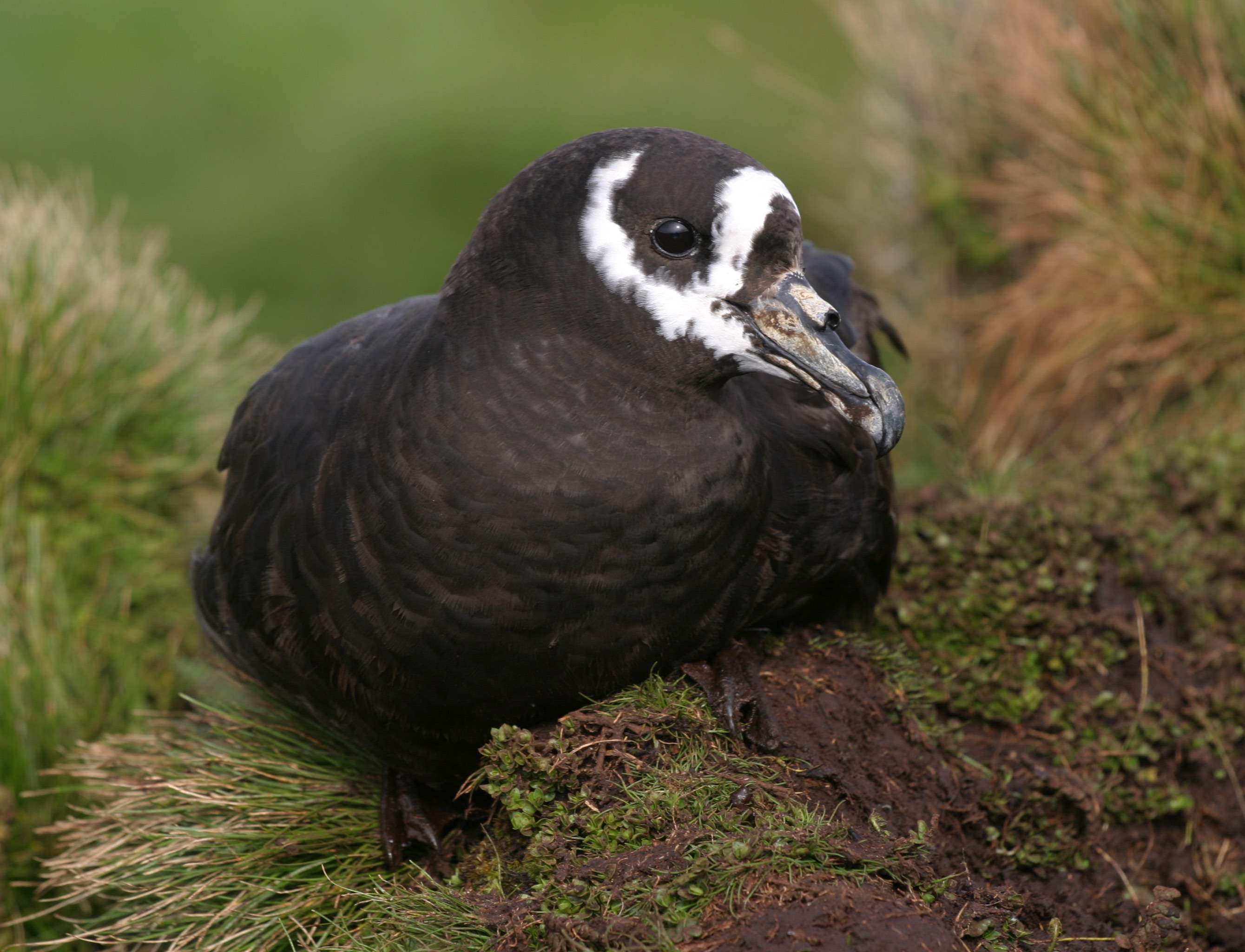 Out in the daytime: a Spectacled Petrel at its burrow entrance

I returned to Inaccessible the following two years, culminating in a summer-long stay while conducting the research for my PhD on the ecology and evolution of Tristan’s Nesospiza finches, or buntings as they were known then.  However, with assistance from Coleen Moloney, I also made observations on Spectacled Petrels, including recording their calls, and testing their response to playback of White-chinned Petrel P. aequinoctialis calls.  This culminated in a paper splitting the two species, a decision that was later supported with genetic evidence by Mareile Techow.  This is the only time that I have seen Spectacled Petrel chicks – large bundles of down already bearing the distinctive white spectacle that they bear throughout their lives. 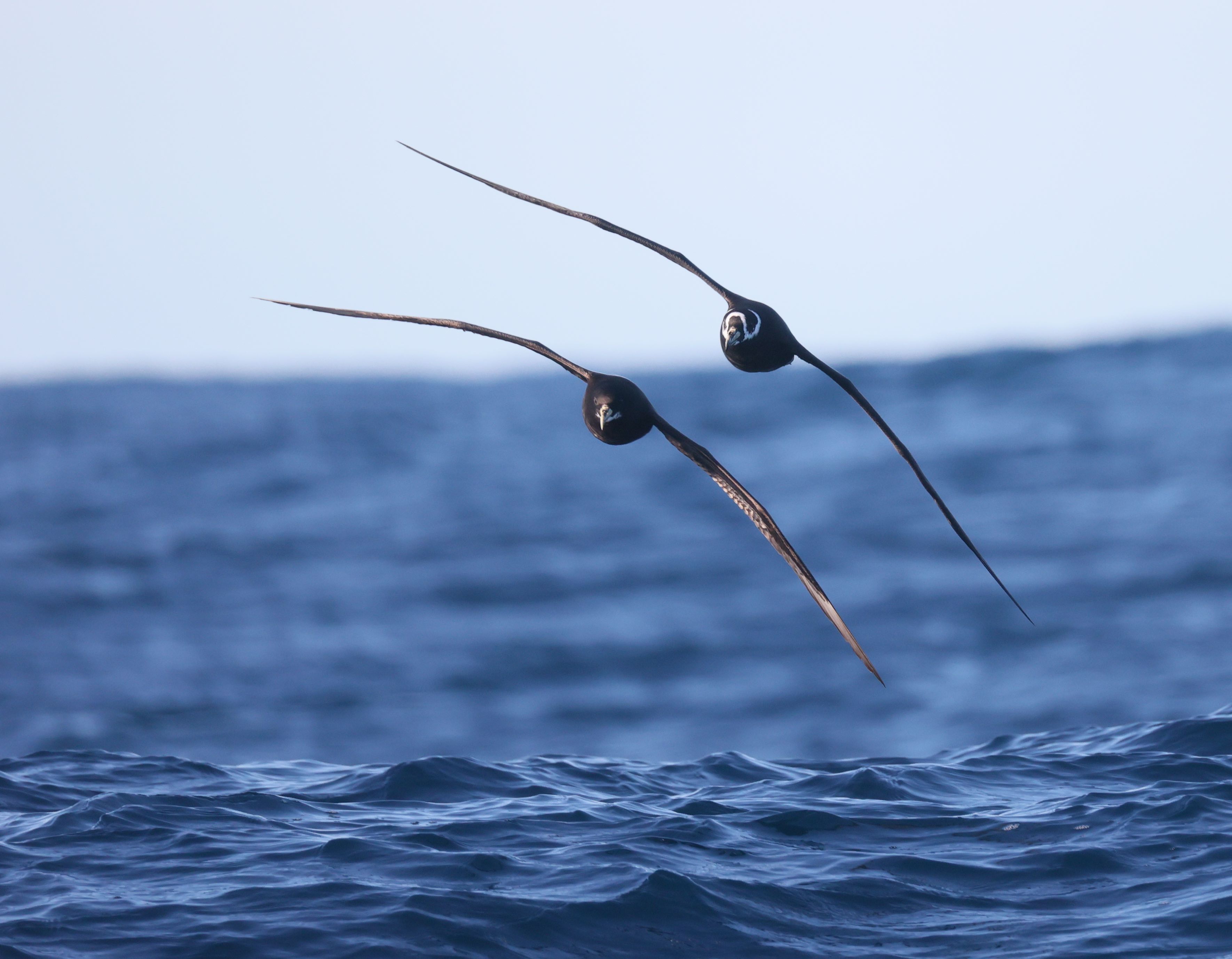 Flying in unison: a White-chinned (left) and a Spectacled Petrel

I managed to spend another summer on Inaccessible in 1999/2000.  My main goal was to assess whether there had been any change in the distribution and abundance of hybrid finches on the island plateau in the decade since my PhD study.  But to help fund the visit, I obtained a grant to reassess the population size of Spectacled Petrels.  This was when concern about the impact of long-line bycatch on albatrosses and large petrels was at its peak, and there was real concern about the status of the petrel, given its modest population size and known mortality on long-lines off Brazil.  At that time, the most recent population assessment was Mike Fraser’s estimate of 1000 pairs, made during the Denstone Expedition to Inaccessible in 1982.  To our surprise, we found that there were at least 4000 occupied burrows on the island.  Either Mike’s estimate was very conservative, or the species was doing well despite the impacts of long-line bycatch. 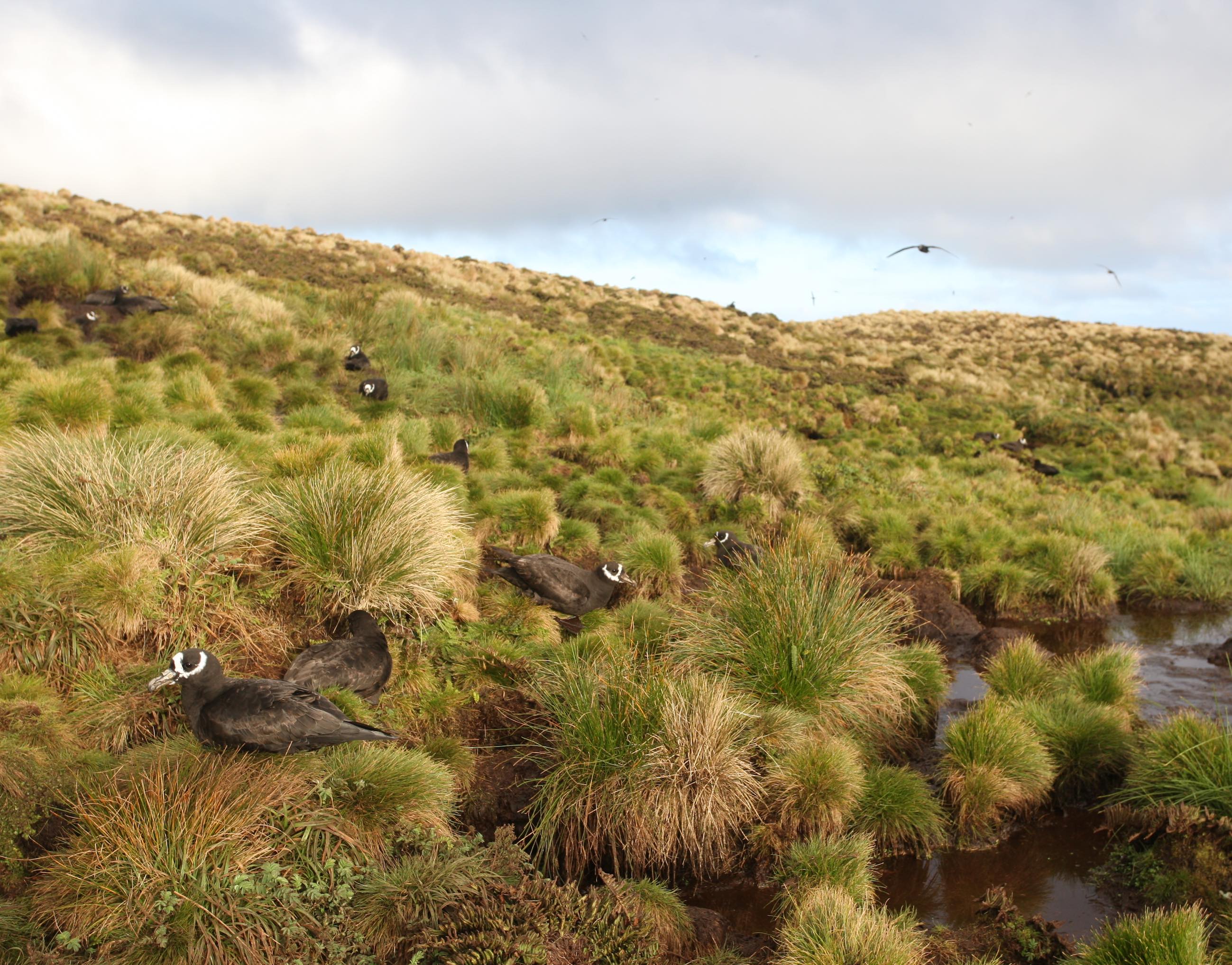 With no introduced cats or rodents, Spectacled Petrels can breed undisturbed

I returned in 2004 with Cliff Dorse to repeat the Spectacled Petrel survey.  We estimated a population of some 10 000 pairs, and further surveys in 2009 (with Rob Ronconi) and in 2018 (with Ben Dilley) confirmed that the population was increasing in leaps and bounds, with the most recent estimate as high as 30 000 pairs.  It appears that the Spectacled Petrel narrowly avoided extinction at the end of the 19th Century, when feral pigs roamed Inaccessible Island.  Fortunately, the pigs died out before they ate the last of the petrels, and the Spectacled Petrel population has been recovering ever since.  As a consequence, the species’ threatened status was moved from Critically Endangered to Vulnerable in 2007.  It is likely that a sister population used to breed at Amsterdam and perhaps also on St Paul, French islands in the central Indian Ocean, but were extirpated by the menagerie of mammals introduced to those islands. 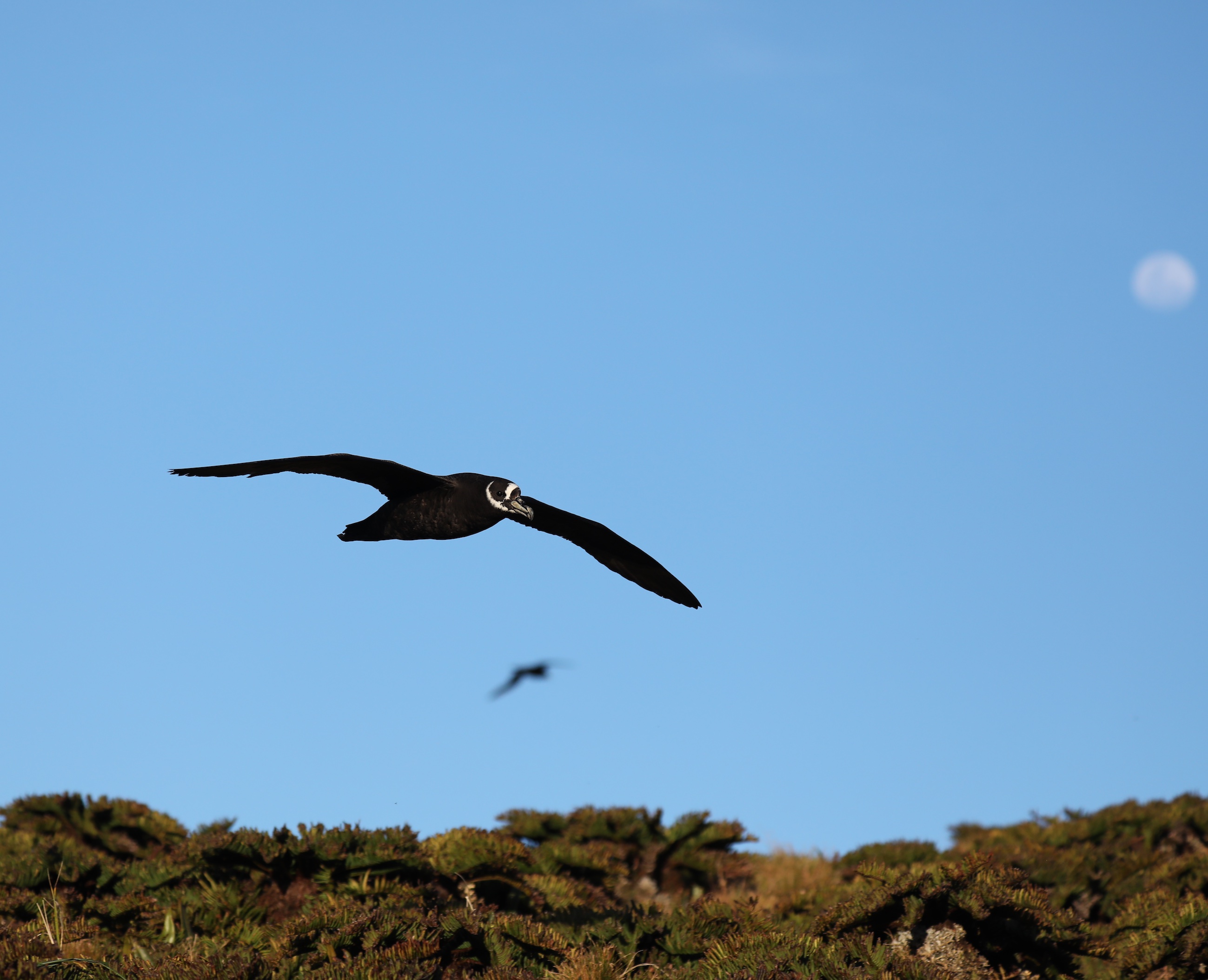 Inaccessible Island is now formally protected as a Nature Reserve, and forms part of the Gough and Inaccessible Islands World Heritage Site.  I applaud the foresight of the Tristan community for conserving these magnificent islands and their globally important biota.