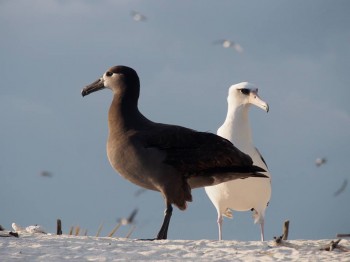 Black-footed and Laysan Albatrosses, photograph from the Kure Atoll Conservancy

“The stomach contents (food and ingested plastics) of Laysan Albatross Phoebastria immutabilis and Black-footed Albatross P. nigripes were examined by necropsy analysis of birds caught as bycatch in the pelagic longline fisheries in the Western North Pacific. The contents were classified separately for the proventriculus and gizzard. Undigested fish and cephalopods were found in the proventriculus, while hard objects such as cephalopod beaks, plastics, and pebbles were found in the gizzard. This indicates that the retention time of soft tissues in fish or cephalopods differs from that for hard objects. The main prey of both albatrosses consisted of mesopelagic cephalopods such as Cranchiidae, Gonatidae, Histioteuthidae, and Onychoteuthidae species. Laysan Albatrosses also foraged on small teleosts (Japanese Anchovy Engraulis japonicus and some Myctophidae fishes) as major prey items. The estimated dorsal mantle length of cephalopods preyed upon by the albatrosses was below 200 mm, which was smaller than the mature sizes of those cephalopods and the size class mainly preyed upon by cetaceans. This implies that the albatrosses may forage on immature cephalopods floating in the surface layer. Ingested plastics were found in 71.8% of Laysan and 31.8% of Black-footed Albatrosses and plastic fragments were the most abundant.”