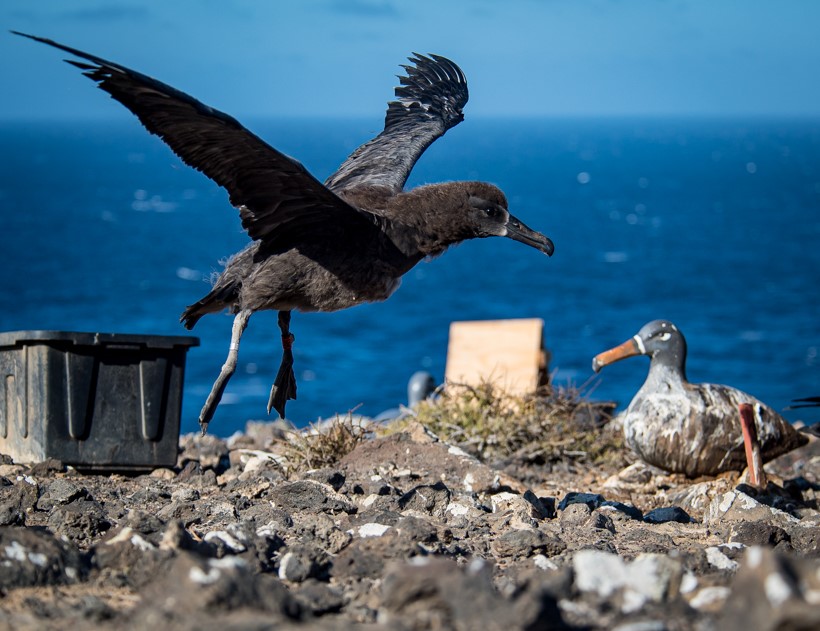 In the air and ready to fledge with its metal and colour bands: a translocated Black-footed Albatross on Isla Guadalupe - with a guano-splattered decoy watching on

The first globally Near Threatened Black-footed Albatross Phoebastria nigripes hatched and raised in Mexico fledged yesterday from Isla Guadalupe, just a few days before World Albatross Day on the 19th.  Named ‘Snowflake’, “it will wander around the Pacific Ocean for the next three to five years, after which it will come back to Guadalupe to search for a mate, and hopefully begin nesting on the island in 7-9 years, making it its new home.” 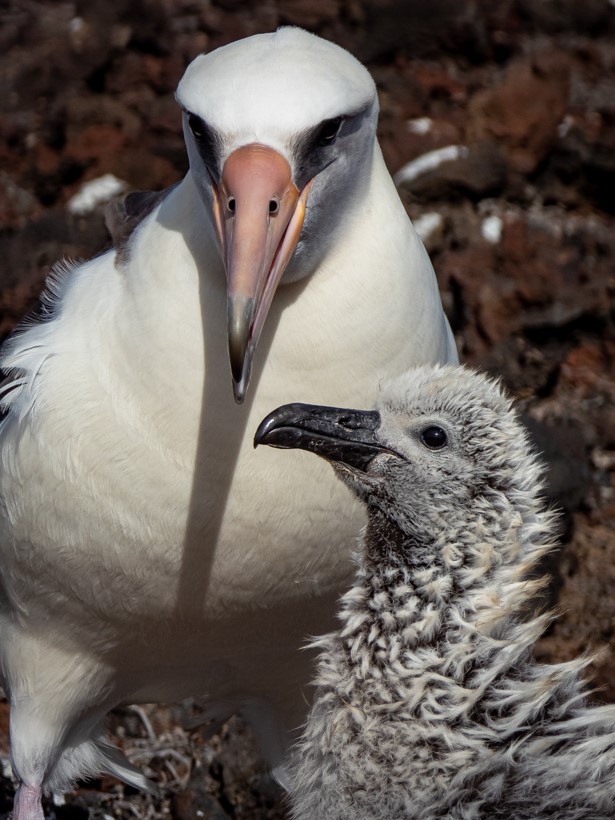 The fledgling was moved as an egg as part of a binational Black-footed Albatross translocation project from the USA’s Midway Atoll in Hawaii to Isla Guadalupe in Mexico, where it was hatched and raised by Laysan Albatross P. immutabilis foster parents (whose own egg was deemed infertile).  Two NGOs, Hawaii’s Pacific Rim Conservation (PRC) and Mexico’s Grupo de Ecología y Conservación de Islas (GECI), coordinated efforts with the federal governments of both countries to transfer 21 eggs (of which 18 hatched) and nine chicks (which have been hand raised) between the two islands.

“In the following days, one by one, the remaining 26 fully feathered chicks will begin their first flight to adulthood.  We wish them all the best, hoping to see them again in a few years. Guadalupe Island and all of us will be waiting for you with open arms.”  For the next couple of years, the binational team aims to move up to 42 eggs and 25 chicks per year in order to have at least 100 individuals to form a new breeding colony on Guadalupe.

The ACAP Secretariat comments on the significance of the translocation project

The significance comes from its international nature.  Whereas chicks of three species of albatrosses have been successfully translocated by air over long distances previously within Japan and the USA, this is the first time a translocation has involved two countries.  If successful, resulting in the establishment of a new colony, an Isla Guadalupe population of Black-footed Albatrosses will represent a substantial increase in the species’ population distribution, add a second albatross to the list of Mexican breeding species and be one safe from projected sea-level rise.

Further, establishment of a Black-footed Albatross breeding colony on Isla Guadalupe is seen as giving increased value to Mexico becoming a Party to the Agreement on the Conservation of Albatrosses and Petrels (ACAP) and contributing to albatross conservation efforts at a global level.  At present, Mexico attends ACAP meetings as an observer.