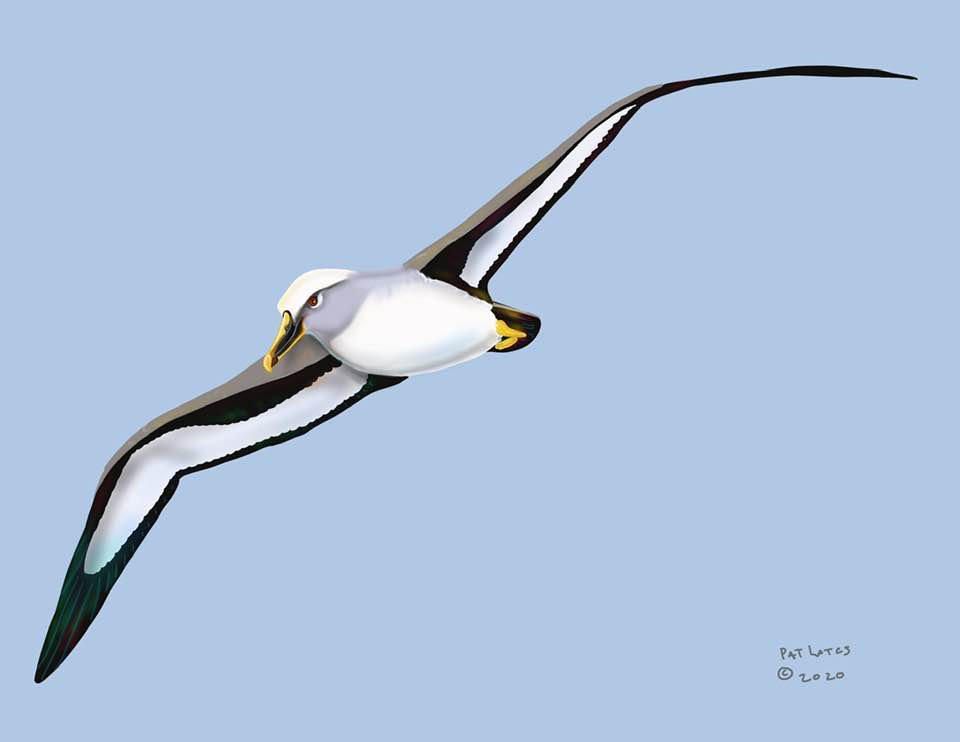 “Three albatross species occur in Peru that nest in New Zealand offshore islands: Salvin’s (Thalassarche salvini), Buller’s (T. bulleri ssp.), and Chatham albatross (T. eremita). To determine their spatial distribution, relative abundances, and foraging behavior in Peru, we conduct two surveys coinciding their wintering time in the austral autumn and spring 2019. The study area was from 06° S to 18° S and from the coastline to 100 nautical miles (nm) offshore. We recorded 483.7 hours of observation while surveying 7,678 km², recording 249, 200, and 22 individuals of Salvin’s, Buller’s, and Chatham albatrosses, respectively. Salvin’s occupied shallower waters along the continental shelf-break in the northern and central regions (07°–12° S), while Buller’s and Chatham’s preferred oceanic waters in southern regions (12°–17° S). Salvin’s greatest abundance was during autumn (April–June) when adults dominated (85.7%) and shifted to the north. In spring (October–December), the Salvin’s abundance was lower and dominated by subadults (62.5%) shifting to the south. Conversely, Buller’s greatest abundance was in spring, with similar age-classes to those of Salvin’s, while in autumn a lower abundance was observed and adults dominated (>85%). Chatham’s adults (80%) were abundant in autumn, while in spring Chatham’s were very few (n = 3 total observations). According to a Principal Component Analysis (PCA) and Correspondence Analysis (CA), Salvin’s were positively associated with higher sea temperature and salinity, lower latitudes, and shallower depths. Buller’s and Chatham’s were associated with greater shelfbreak distance and wind velocity. Salvin’s presence in Peru could primarily originate from birds coming from the Western Chain in The Snares. We suggest that adult Buller’s seen in autumn, probably originate from the Chatham Islands, while those in spring probably originate from The Snares. Salvin’s were spatially associated with cephalopods and Buller’s and Chatham’s with fishes. The two latter species were attracted to offal discards of small-scale fisheries.”