Down we go. Christmas Shearwaters from Kure Atoll can dive to 24 metres 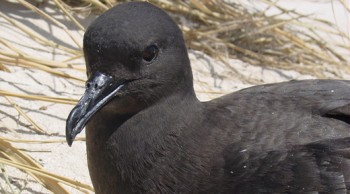 “The Christmas Shearwater Puffinus nativitatis is an aquatic, tropical shearwater. While individuals of this species are known to forage by pursuit plunging and diving, there are no published reports quantifying their sub-surface foraging behavior. We obtained diving information from eight chick-rearing Christmas Shearwaters on Kure Atoll during June-August 2017. Over the 33 days during which instruments were deployed, 1521 dives were recorded. Individual deployments lasted three to eight days and were independent of the maximum depths recorded. Individual maximum depths were 10.7-24.1 m, averaging 15.4 m. While the deepest and longest recorded dive reached 24.1 m and lasted 31 s, the majority of dives were < 3.0 m deep (64%) and lasted ≤ 3.0 s (53%). Overall, deeper dives were longer. Almost all diving occurred during daylight, with peak diving activity (13%) occurring between 17h00 and 18h00 (dusk). Genetic metabarcoding identified digested prey items from regurgitations, distinguishing 11 species of fish and squid. This study highlights the way in which this species of concern uses the epipelagic foraging habitat within the Papahānaumokuākea Marine National Monument.”