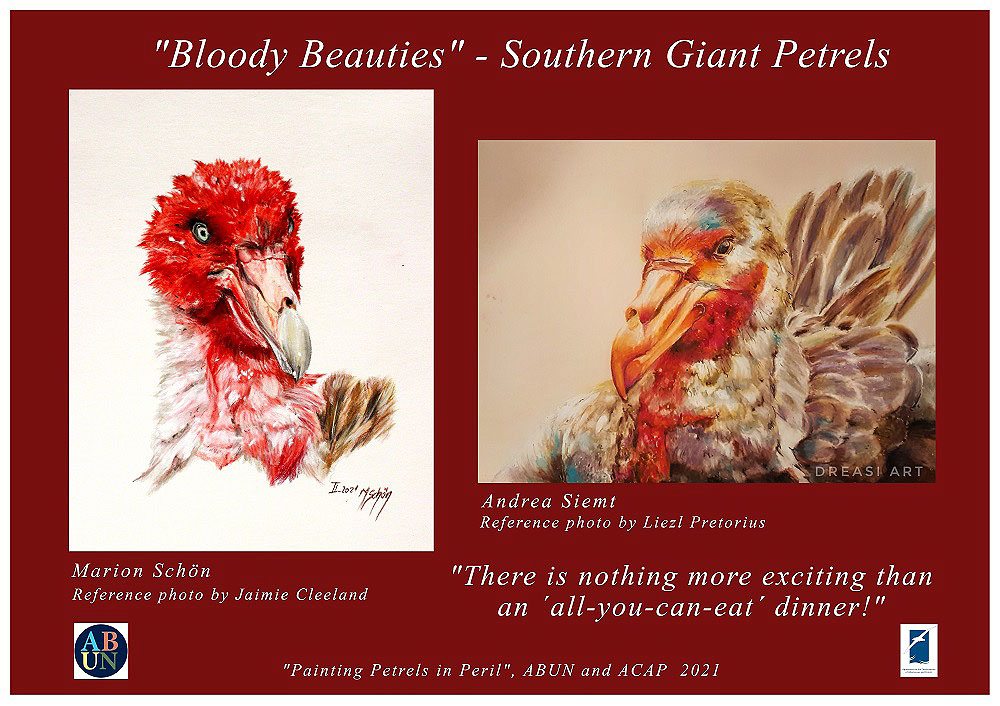 Two members of Artists & Biologists Unite for Nature (ABUN), Marion Schön and Andrea Siemt, have combined their artistic talents to create “Bloody Beauties”, depictions of two blood-soaked Southern Giant Petrels Macronectes giganteus following their scavenging from seal carcasses on sub-Antarctic islands.  Their artworks and the poster have been produced as part of ABUN Project #35 entitled “Paintings Petrels in Peril”, over January and February this year.  This collaboration with ACAP aimed to produce paintings of all the nine ACAP-listed petrels and shearwaters.  The works will be used to help create awareness of the threats faced by the species.

The two artists live in Germany, Andrea in Schwetzingen in the south-west in an area "famous for its asparagus" and Marion near the French border in Neunkirchen.  Although Andrea says “we are challenging each other many times and have a lot of fun painting animals for ABUN” they are yet to meet in person.  Andrea describes herself as an amateur artist who started painting 14 years ago with pastels, watercolours and charcoals being her favourite media.  Marion, who designed the poster, writes  "My art is inspired by expressions, animals and people, to raise awareness for the voiceless ones, no matter if furry, feathered, scaled or human". An avowed amateur who does not sell her art, Marion prefers to work in pastels and charcoal. She says that being a member of ABUN her artworks go around the world to help biologists and projects open the hearts of people to our beautiful nature and endangered species. 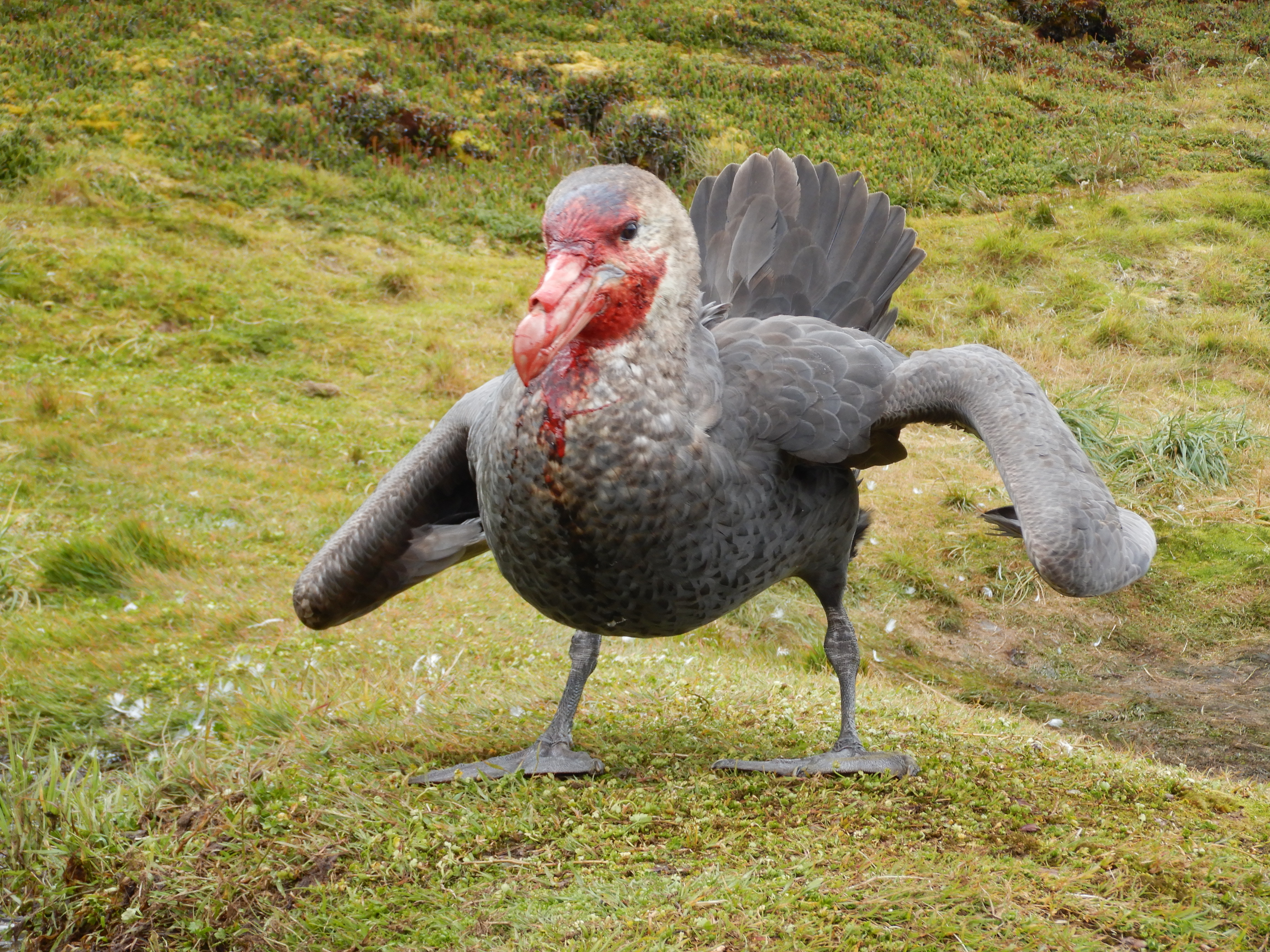 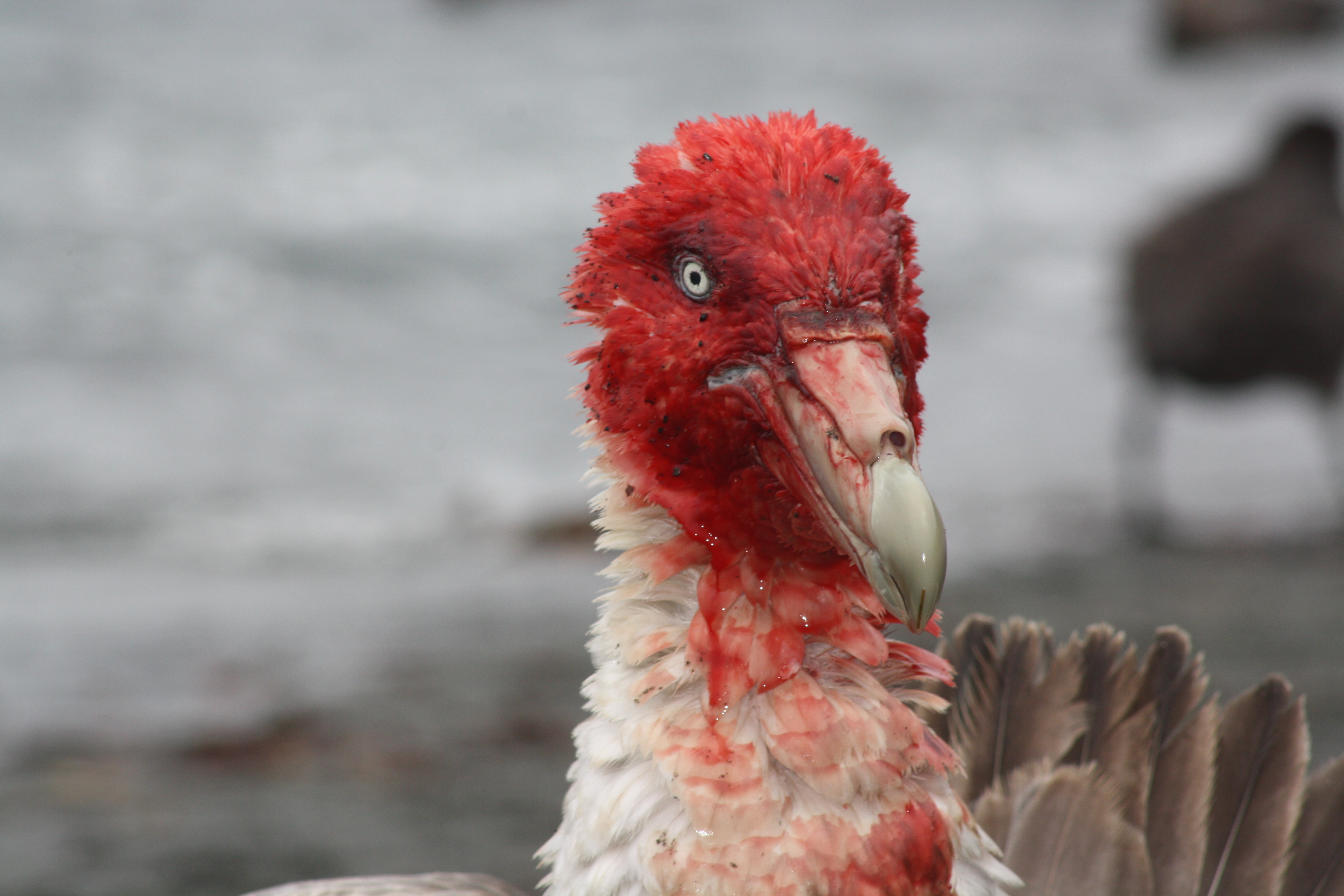 Inspiring the artists: Southern Giant Petrels on Marion Island (above) and Macquarie Island, photographs by Liezl Pretorius and Jaimie Cleeland

Liezl Pretorius has a similar account from another sub-Antarctic island: “My picture was taken at Trypot Beach, Marion Island, in the summer of 2018/2019.  There were about 10 birds competing over a freshly dead Southern Elephant Seal female that died during the moult season. A large number of elephant seals were piling up on each other trying to get into a small muddy pool as I walked past early morning censusing elephant seals, and when I came back late afternoon I found her with her head stuck in the thick mud. So she obviously couldn't get out from underneath all the others and drowned. And once the GPs realised that she wasn't alive anymore, they moved in very quickly. It was amazing to watch them in action and to see how quickly they utilised every piece of her for food. A few days later there were basically only skin and bones left.”