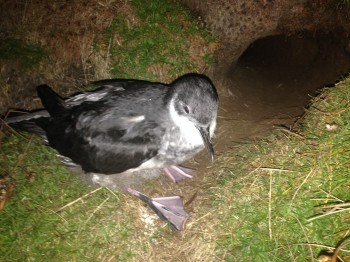 A Manx Shearwater close to fledging at its burrow mouth, photograph by Jaclyn Pearson

Martyna Syposz (Department of Zoology, University of Oxford, South Parks Road, UK) and colleagues have published in the in the Journal of Avian Biology on fledging direction of Manx Shearwaters Puffinus puffinus.

“The first solitary migration of juvenile birds is difficult to study because of a low juvenile survival rates and sometimes long delays in return to the breeding grounds. Consequently, little is known about this crucial life event for many bird species, in particular the sensory guidance mechanisms facilitating the first migratory journey. Initial orientation during the first migration is a key measure to investigate these mechanisms. Here, we developed an assay to measure initial orientation as flight direction upon first take‐off in nocturnally fledging juvenile seabirds. We dorsally deployed a coloured LED on juvenile birds to allow researchers to observe the vanishing bearings of individuals as they flew out to sea. Additionally, we co‐deployed either a small Neodymium magnet or glass bead (control) on top of the bird's head to investigate the use of magnetoreception, previously unexplored in this early life stage.

We used this assay to observe the first flight of Manx shearwaters (Puffinus puffinus) and found that they did not orient towards their wintering ground straight after taking off. Further, we did not find an effect of the magnetic treatment on juveniles’ flight direction, though whether this is due to the birds not using magnetoreception, other salient cues being available or a lack of motivation to orient to the migratory beeline is unclear. We were, however, able to identify wind direction and topography as drivers of first flight direction in Manx shearwaters, which fledged with wind component between a crosswind and a tailwind and directed their maiden flight towards the sea and away from the land.

This novel assay will facilitate the study of the maiden flight of nocturnally fledging birds and will help advance the study of sensory guidance mechanisms underpinning migratory orientation in a wide range of taxa, including species which are traditionally challenging to study.”