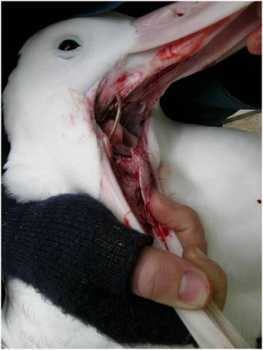 A hooked Wandering Albatross gets a second chance, photograph from the British Antarctic Survey

“Bycatch of seabirds in longline fisheries includes mortalities and live captures (mainly during hauling). Excluding outliers, the latter accounts for 5–70% (mean 40.4%) of all bycaught birds in demersal, and 3–23% (mean 10.7%) in pelagic longline fisheries. The proportion that later die from injuries is unknown, and this cryptic mortality complicates efforts to quantify fisheries impacts. Over a 26-year period at South Georgia, foul-hooking indices - birds with embedded hooks or entangled among tens of thousands checked at the colony - were broadly similar in wandering albatrosses Diomedea exulans and giant petrels Macronectes spp., an order of magnitude lower in black-browed albatrosses Thalassarche melanophris and nil in two other albatross species. This likely reflected differing degrees of overlap with fisheries and interaction with gear during hauling. Indices peaked in the early-mid 2000s, then declined, broadly corresponding with changing fishing practices, including the lagged effect of a seasonal fisheries-closure, introduction of a new fishing system, reduced effort in some demersal fisheries and general improvements in bycatch mitigation. Foul-hooking indices at colonies can therefore reflect relative risk for different species over time, and be a useful adjunct to vessel-based monitoring of live-capture rates. Taking into account age and status when reported, and annual survival probabilities, subsequent survival of live-caught and released wandering albatrosses was around 40% of that expected for the wider population. This has major implications for ecological risk assessments that seek to determine the impacts ofisheries on seabirds, as most do not currently consider deleterious impacts of live capture.”