That House Mice Mus musculus have turned to attacking albatross chicks on Gough and Marion Islands has become well known – and has been regularly reported on in ACAP Latest News.  More recently, mice have been recorded attacking adult Critically Endangered Tristan Albatrosses Diomedea dabbenena on Gough and adult Northern Giant Petrels Macronectes halli on Marion (click here).  The observations published earlier this year in the journal Polar Biology gave only circumstantial evidence of mice attacking an adult of another albatross species on Gough, as stated in the paper’s abstract:  “In October 2018, an incubating Atlantic Yellow-nosed Albatross Thalassarche chlororhynchos was found on Gough Island with a wound on its back suggestive of a mouse attack …”.

Definite proof of an attack on an incubating Atlantic Yellow-nosed Albatross (an Endangered species) on Gough now comes with a 40-s video clip showing a mouse clambering over and disappearing under the bird’s rump feathers over a period of several hours on the night of 3/4 November this year – to the bird’s obvious discomfort.

Chris Jones, field biologist of the Gough Island Restoration Programme and currently on the island, has written to ACAP Latest News:

“The bird in the video clip had a small wound on its rump and abandoned the nest the following night.  We have had trail cameras on 31[Atlantic Yellow-nosed Albatross] nests on the southern slopes of Richmond [Hill], collecting hundreds of hours of footage and have only captured the one mouse attack on an adult.” 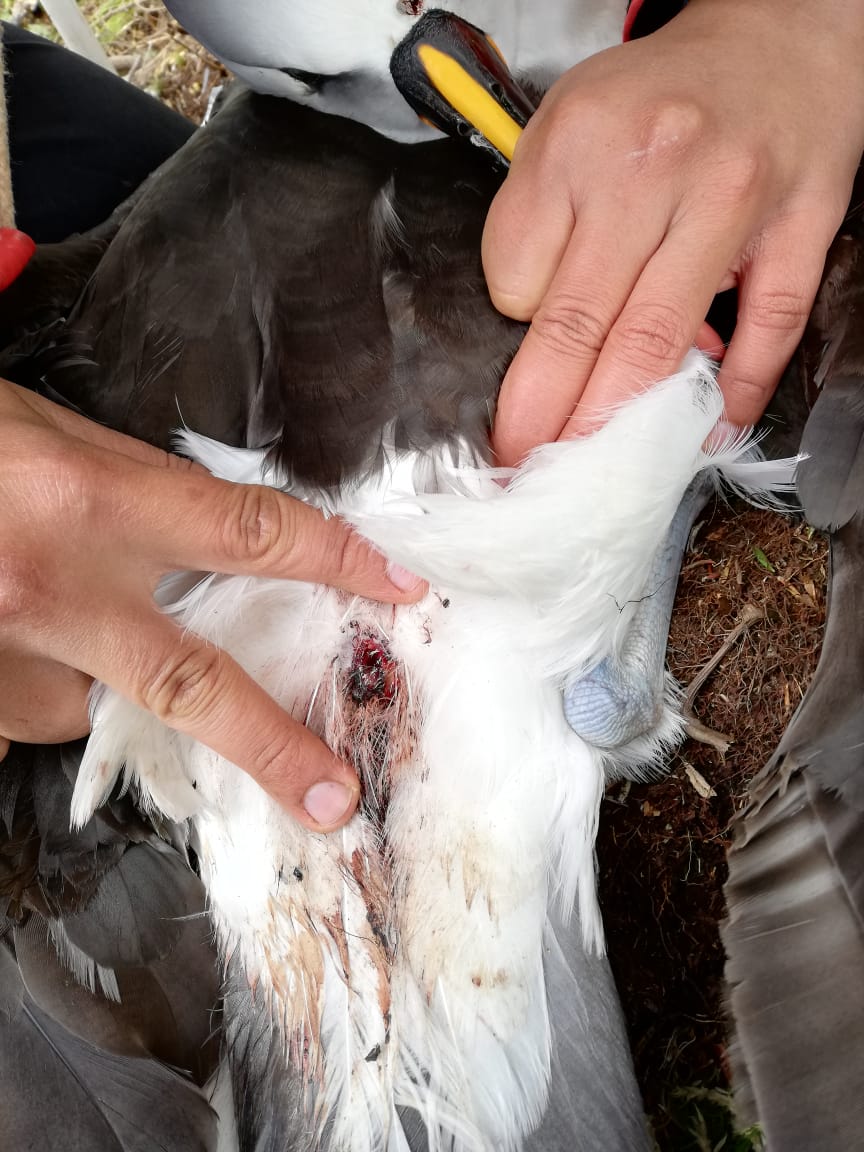 The wounded rump of the incubating Atlantic Yellow-nosed Albatross the following day, photograph by Dylan Seaton

With the intention to attempt to eradicate the mice on Gough next year, it is hoped that the island’s albatrosses – and other seabirds – will no longer have to face night-time attacks as videoed on the island last month.

With thanks to Chris Jones, Alexis Osborne, Michelle Risi and Dylan Seaton.  The Gough Island Restoration Programme is being led by the UK’s Royal Society for the Protection of Birds, along with 12 partners.