International support to save albatrosses and petrels: Australia and USA scientists donate time-depth recorders to colleagues in Argentina and Brazil

Time-depth recorders (TDRs) were donated by Australian and American scientists to South American colleagues at the Eleventh Meeting of the ACAP Advisory Committee (AC11), held in the Jurerê Internacional region of Florianópolis, Brazil last month.

TDRs are devices originally developed to be placed on diving animals that can also be used to measure the sinking rate of longline branch lines bearing baited hooks.  The donated equipment will aid conservation research aimed at saving albatrosses and petrels by Argentinian researchers and the Brazilian NGO, Projeto Albatroz.

Edward Melvin (Washington Sea Grant, USA) , handed over the TDRs on behalf of himself  and Graham Robertson (formerly Australian Antarctic Division) to the founder and general coordinator of Projeto Albatroz, Tatiana Neves and to Juan Pablo Seco Pon (Institute of Marine and Coastal Research, University of Mar del Plata, Argentina), in the Il Campanario Villagio Resort, where the international meetings were taking place. 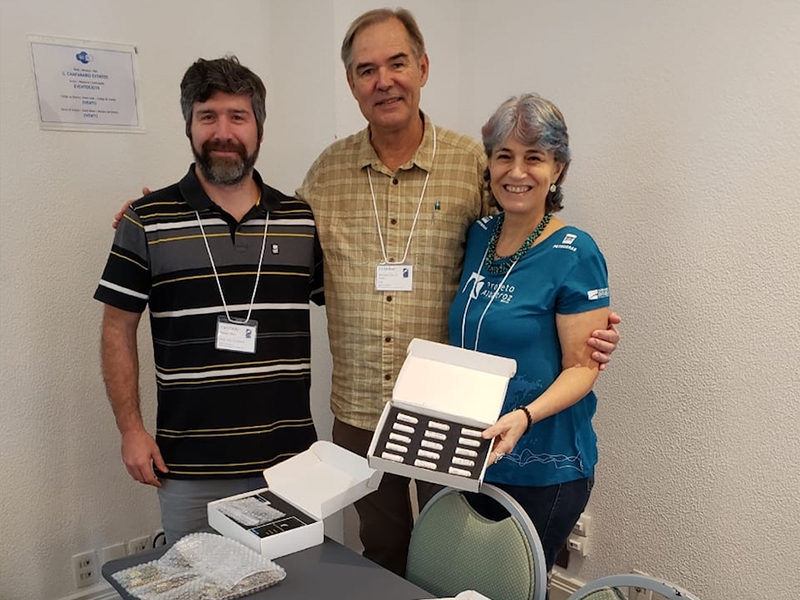 "Because we are initiating research to see how the hook pod mini (click here) works on Brazilian longline vessels, the donated TDRs will be of great value to us," said Tatiana Neves, who is also Vice-chair of the ACAP Advisory Committee.  This will help us find even more relevant results for birds and fishers. "

For the scientific coordinator of Projeto Albatroz, Dimas Gianuca, the TDRs will play an important role in the next studies of the institution.  “They will be used to check the sinking rate of the hooks used on pelagic longlines as well as of hooks in different bottom longline configurations to verify which sink rate offers the least risk of capture to seabirds ".

According to Edward Melvin, the decision to donate the equipment to Project Albatroz came with the end of his academic career. "I and a retired friend have undertaken a lot of work on mitigate catching seabirds," he explains. "At that time, we accumulated equipment that we would like to pass on to other researchers who are on the front line of conservation and we could not think of a better place to donate them than in South America, especially to Brazil and Argentina."

Juan Pablo also highlighted the role of South America in studies of sinking of baits. "We can speak different languages, but there are several types of fisheries we share, as well as several bird species that fly over the South Atlantic and South Pacific. This exchange of research between institutions is very valuable to us and is one of the pillars of this Agreement".

With thanks to Ed Melvin and Tatiana Neves.