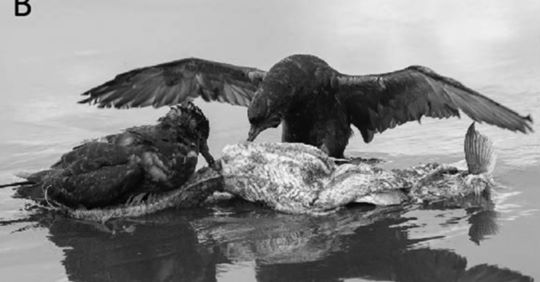 “We report the first documentation of off-water foraging by the Fork-tailed Storm-Petrel Oceanodroma furcata and Short-tailed Shearwater Ardenna tenuirostris, a behavior not previously documented in any member of the families Hydrobatidae or Procellariidae. Over a two-week period in September 2016, we regularly observed individuals of these species over land on an extensive intertidal zone on the Bristol Bay coast of the Alaska Peninsula. We documented irregular feeding behaviors by storm-petrels including pattering over shallow water and sand, digging into sand to uncover food items, and feeding on beach-cast fish. We revisited the site in August 2017 and did not observe storm-petrels, but we observed four shearwaters feeding on a beach-cast fish. The aberrant feeding behaviors, paucity of stomach contents and emaciated body condition of salvaged and collected birds, together with patterns between bird occurrence and wind speed and direction, indicate to us that these birds were blown to shore while weakened by food stress or compromised health. We further suggest that these aberrant feeding behaviors may be related to massive seabird die-offs that occurred in this region during 2014-2016, die-offs in which Fork-tailed Storm-Petrels have heretofore not been reported as a species affected by this phenomenon.”