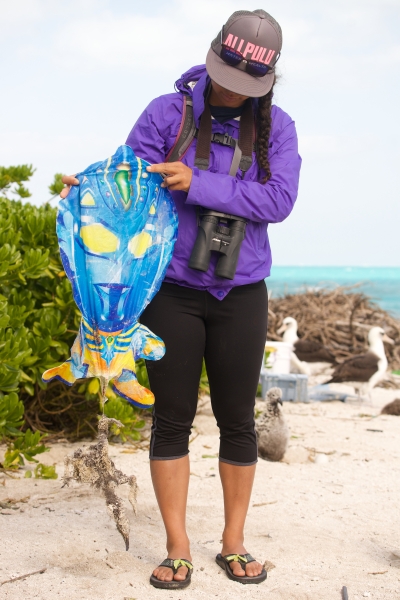 A researcher holds a collapsed balloon entangled with the corpse of an albatross chick on Kure Atoll, Papahānaumokuākea Marine National Monument.

The Marine Debris Program of the USA’s National Oceanic and Administration (NOAA) has reported recently on the dangers balloons can cause to marine life:

“Balloons that are released into the air don’t just go away, they either get snagged on something such as tree branches or electrical wires, deflate and make their way back down, or rise until they pop and fall back to Earth where they can create a lot of problems. Many balloons that are not properly disposed of end up in the ocean and along shores, becoming marine debris. Balloons can be carried by currents and winds, having far reaching impacts. Once balloons enter the ocean, they can become yet another hazard for marine wildlife. Balloons can be mistaken for food, and if eaten and ingested, balloons and other marine debris can lead to loss of nutrition, internal injury, starvation, and death. String or ribbon that is often found attached to balloons can cause entanglement. String can wrap around marine life causing injury, illness, and suffocation.”

ACAP Latest News has previously reported on several species of ACAP-listed albatrosses and petrels interacting with balloons, both by ingestions and entanglements (click here).