The Museum of New Zealand – Te Papa Tongarewa in Wellington supports an active ornithological research programme that extends beyond the classic museum studies of taxonomy and osteology to active field work on seabirds at their mainly island breeding sites.

The museum posts a series of biodiversity blogs on its website, a number of which reports on field trips after seabirds that have been taken by staff members. The most recent blog, by regular contributor Colin Miskelly, describes how he joined a Department of Conservation team to study the globally Vulnerable Chatham Petrel Pterodroma axillaris and other burrowing seabirds on introduced predator-free Rangatira Island, a 219-ha designated nature reserve in the Chatham Group. Rangatira’s fragile ground requires the wearing of “petrel boards” to reduce the chances of collapsing burrows when checking the contents of over 200 nest boxes installed from the mid 1990s.  The boxes have been provided with flaps over their entrances to deter entrance by Broad-billed Prions Pachyptila vittata. 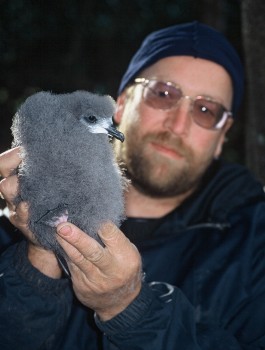 Te Papa has partnered with Birds New Zealand and the Department of Conservation to develop NZ Birds Online, a digital encyclopaedia of New Zealand birds, which, inter alia includes images, sound files and information for many of the 31 ACAP-listed albatrosses, petrels and shearwaters.

With thanks to Colin Miskelly.