“Hundreds of thousands of seabirds die annually as a result of being bycaught in longline fisheries, and these rates are unsustainable for many seabird populations worldwide. To understand effects at the population level, it is essential to assess sex- and age-biased mortalities, since uneven mortalities may exacerbate bycatch impacts. In the Mediterranean, bycatch is the main cause of population declines for the 3 endemic shearwater species (Scopoli’s Calonectris diomedea, Balearic Puffinus mauretanicus and Mediterranean shearwater P. yelkouan), but little is known about population biases of the birds caught in longliners. From 2003 to 2015, we collected 639 shearwater carcasses from Spanish longliners operating in the north-western Mediterranean, determined their age and sex and examined their spatial and temporal patterns and the origin of ringed birds. Most shearwaters caught in longliners were adults, but the proportion of immatures and subadults increased in the late breeding period. Adult Scopoli’s shearwaters were mostly caught around the breeding colonies. In contrast, all Puffinus birds were caught on the Iberian shelf. Catches of Scopoli’s shearwaters were male-biased, particularly during the pre-laying period and close to the breeding colonies. Catches of Puffinus shearwaters were also male-biased during the pre-laying period, but adult catches were female-biased during chick-rearing. Ring recoveries revealed that most birds were ringed in the nearby Balearic Islands, but some Scopoli’s shearwaters ringed in France and Italy were also caught during their migration, indicating that the impacts of the Spanish longliners extend well beyond the Spanish colonies. The adult-biased and sex-biased mortality found in this study may aggravate bycatch impacts on populations and highlights the urgent need for conservation action.” 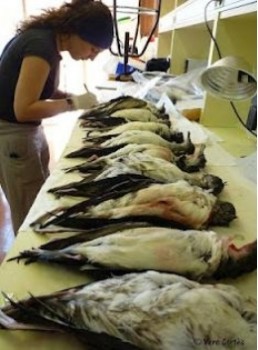