“Industrial longline fisheries cause the death of large numbers of seabirds annually. Various mitigation measures have been proposed, including the use of tori lines. In this study the efficiency of a single tori line to reduce seabird bycatch was tested on pelagic longline vessels (25-37 m length). Thirteen fishing trips were carried out in the area and season of the highest bycatch rates recorded in the southwest Atlantic (2009–2011). We deployed two treatments in random order: sets with a tori line and without a tori line (control treatment). The use of a tori line significantly reduced seabird bycatch rates. Forty three and seven birds were captured in the control (0.85 birds/1,000 hooks, n = 49 sets) and in the tori line treatment (0.13 birds/1,000 hooks, n = 51 sets), respectively. In 47% of the latter sets the tori line broke either because of entanglement with the longline gear or by tension. This diminished the tori line effectiveness; five of the seven captures during sets where a tori line was deployed were following ruptures. Nine additional trips were conducted with a tori line that was modified to reduce entanglements (2012–2016). Seven entanglements were recorded in 73 longline sets. The chance of a rupture on these trips was 4% (95% c.l. = 1–18%) of that during 2009–2011. This work shows that the use of a tori line reduces seabird bycatch in pelagic longline fisheries and is a practice suitable for medium size vessels (~25-40 m length). Because the study area has historically very high bycatch rates at global level, this tori line design is potentially useful to reduce seabird bycatch in many medium size pelagic longline vessel fishing in the southern hemisphere.” 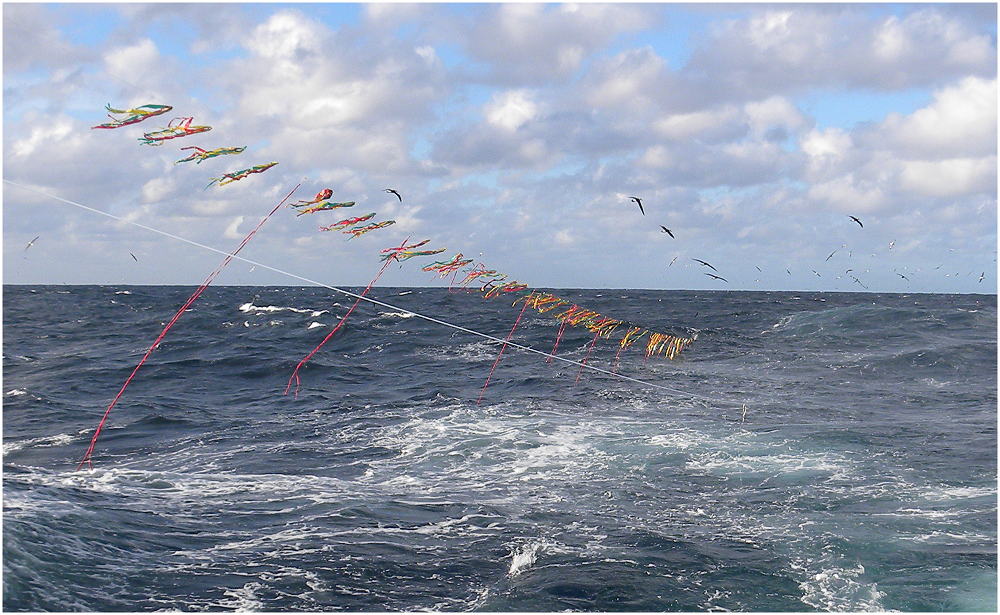 A bird-scaring line keeps seabirds away off Uruguay, photograph by Domingo Jimenez, courtesy of Andrés Domingo

With thanks to Andrés Domingo.