Endemic Henderson Petrels continue to survive in the face of rats

Steffen Oppel (Royal Society for the Protection of Birds, Sandy, U.K.) and colleagues have a paper accepted by Emu Austral Ornithology that reports on the breeding success of island-endemic and Endangered Henderson Petrels Pterodroma atrata in the face of predation by introduced Pacific or Polynesian Rats Rattus exulans

“One of the most important breeding colonies for gadfly petrels in the sub-tropics, Henderson Island in the South Pacific Ocean, was subjected to a rat eradication attempt in 2011, but the eradication failed.  Here we examine whether the current population status of the endemic Henderson Petrel Pterodroma atrata is consistent with an ongoing population decline.  We collected basic biological information on Henderson Petrels in 2015 to compare estimates of breeding population size and nest survival to data from 1991.  We found that the extrapolated population size of 19,987 pairs was marginally higher than the comparable estimate of 18,668 in 1991.  We also estimated the nest survival of 25 nests to be 28.5%, and most nest failures occurred within 7 days of hatching when chicks were killed by rats (n = 3) or a crab (n = 1).  Breeding success was higher than in 1991, and possibly sufficient for a stable population.  Although differences in survey effort render it difficult to directly compare estimates from 1991 and 2015, there is currently no evidence that the conservation status of the Henderson Petrel has deteriorated since it was listed as 'Endangered' by the IUCN.” 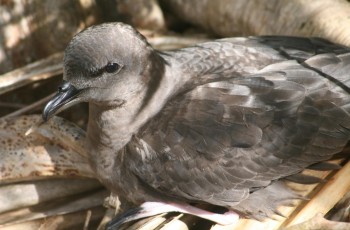