Will you still love me when I'm 64? Wisdom the Laysan Albatross is back on Midway Atoll for another season

Regular readers of ACAP Latest News will know of Wisdom the 60-something Laysan Albatross Phoebastria immutabilis, the oldest known albatross in the World (click here).  Wisdom, a female first banded on the USA’s Midway Atoll National Wildlife Refuge in 1956 in adult plumage, failed at the egg stage last breeding season after a number of successful years (click here) but she and her banded partner are now back for yet another go.  Because Laysan Albatrosses do not return to breed until they are at least five years old, it is estimated that Wisdom is at least 64 years old, but she could well be even older.

Wisdom and her mate were first spotted on 19 November by Kiah Walker, a Midway volunteer.  Following mating they have now left the island for sea but are expected back when their egg will be laid (click here). 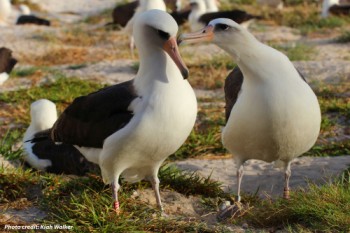 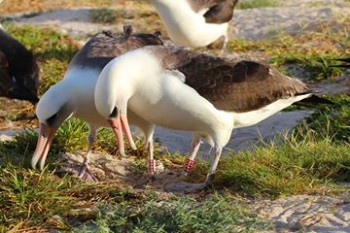 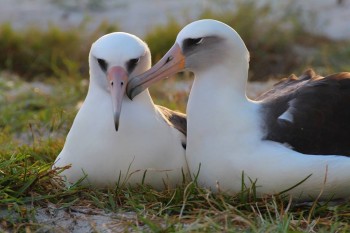 Wisdom and mate at their nest site, November 2015, photographs by Kiah Walker

“Although Laysan albatrosses typically mate for life, Wisdom has likely had more than one mate and has raised as many as 36 chicks.  Laying only one egg per year, a breeding albatross and their mate will spend approximately six months rearing and feeding their young.  When not tending to their chicks, albatross forage hundreds of miles out at sea periodically returning with meals of squid or flying fish eggs. Wisdom has likely clocked over six million ocean miles of flight time.”