Heading south: tagged Pink-footed Shearwaters are on their way home to Chile

The Vulnerable Pink-footed Shearwater Puffinus creatopus is the most recent addition to the ACAP “family”, having been listed in May this year (click here).  A breeding endemic to Chile, it migrates to the northern hemisphere as far as Canadian waters after breeding.  Over recent years the species’ trans-equatorial migration route along the eastern Pacific seaboard has been studied by the use of solar-powered satellite transmitters.  Ten transmitters were placed on breeding Pink-footed Shearwaters in April this year on Isla Mocha in Chile (click here).

The tagged shearwaters are now heading home to Chile after their trans-equatorial sojourn.  One satellite-tagged bird has flown nearly 21 000 kilometres in total during its migration so far, and is currently heading south (orange dots) toward its breeding site on Isla Mocha. 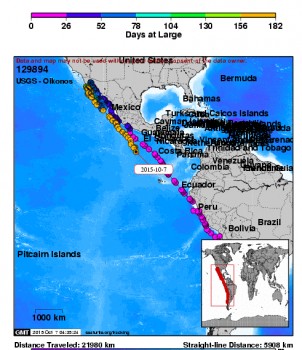 Click here to read of the Pink-foots' progress north towards the Canadian border earlier in the year.